Mining magnate Clive Palmer has been bombarding letterboxes urging people not to get a COVID-19 vaccine and citing discredited figures on the number of deaths caused by the jabs.

Mr Palmer last week sent letters to households in Melbourne claiming the Therapeutic Goods Administration and the government are spreading “misleading information designed to create fear in the population”. 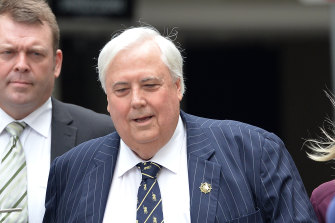 Clive Palmer has continued to spread the misleading figure on the number of deaths caused by COVID-19 vaccines.Credit:Fairfax Media

“The Australian government’s Therapeutic Goods Administration report confirms 210 deaths and 24,000 adverse reactions after the COVID-19 vaccines. There are over 5000 deaths in the USA attributed to COVID vaccines including Pfizer,” Mr Palmer’s letter says.

The TGA did say in May that there had been 210 deaths reported to have “occurred following immunisation”, but this did not mean they had been found to have been caused by COVID-19 vaccines.

Federal Labor MP Andrew Giles said the “ludicrous and destructive” letters had been delivered in his Victorian electorate of Scullin, which last year experienced significant rates of COVID-19 during Melbourne’s second wave.

“Clive Palmer’s wealth may make him a billionaire, but his value as a member of the Australian community is negative.

“People in Melbourne have borne the brunt of the pandemic in Australia, and we don’t need Clive Palmer attacking us, and denying Melburnians the chance to be safe.

“It’s way past time his attention-seeking antics came to an end. He has used his money to undermine our social cohesion and public health efforts. It’s nothing short of disgraceful; it has to stop, or be stopped.”

Mr Giles said there was “confusion and uncertainty” in the community that must be urgently addressed by the government.

The letter drop came after the TGA admonished Mr Palmer earlier this month for taking out advertisements on radio for spreading the same claims about the number of deaths.

The TGA said it was “seriously concerned about the misleading information” being circulated by Mr Palmer that provided an “incorrect picture of the safety of COVID-19 vaccines”.

“The TGA investigates reported adverse events and has found only one case where an individual with vaccine related thrombosis with thrombocytopenia syndrome (TTS) or any other related condition has passed away,” the agency said.

“Sadly, about 160,000 people die in Australia every year – almost 3000 each week – and therefore it is quite expected that there have been some deaths reported within days or a few weeks of vaccination.”

The head of the TGA, Adjunct Professor John Skerritt, this month wrote to Mr Palmer to remind him that public figures have a “responsibility to be factual” and to not “undermine health through spreading misleading information”.

“This is misinformation, pure and simple. Don’t listen to it, it’s rubbish,” Mr Morrison said.

In his letter, Mr Palmer said while he supported the use of vaccines “that have approval for general use, I am very concerned by the use of this vaccine on the general population”. 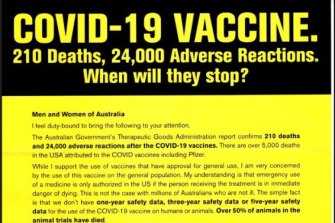 The letter being circulated by Clive Palmer.

“There is no pandemic in Australia – only one person has died of COVID in 2021. The TGA and the government has spread misleading information designed to create fear in the population.