LOS ANGELES — The number of homeless people counted across Los Angeles County jumped 12.7% over the past year to more than 66,400 and authorities fear that figure will spike again once the full impact of the coronavirus pandemic is felt.

The majority of those experiencing homelessness were found within the city of Los Angeles, which saw a 13.6% increase to 41,209, according to data released Friday by the Los Angeles Homeless Services Authority.

The increase was registered one year after the previous tally also found a 12% jump in the county with one of the nation's highest concentrations of residents living on the streets. California has an estimated 150,000 homeless people, the most in the nation.

The crisis is apparent in downtown Los Angeles, where hundreds of people reside in makeshift shanties that line entire blocks in the notorious neighborhood known as Skid Row. Tents regularly pop up on the pavement outside City Hall. And increasingly encampments can be found under freeway overpasses in suburban areas.

January’s annual count came before the COVID-19 outbreak paralyzed the economy and pushed scores of people into unemployment — many of whom were already spending nearly half their earnings on rent in a city with a severe shortage of affordable housing.

“These are folks who are one missed paycheck, one family tragedy, healthcare crisis, car accident — whatever it is — away from losing their housing,” Heidi Marston, the homeless services authority's new director, said this week.

It’s estimated that the county needs more than a half million new affordable housing units to meet current demand, according to a 2020 report by the California Housing Partnership.

Los Angeles County instituted a moratorium on evictions amid the pandemic. Marston fears that when it expires at the end of June, many more will find themselves without homes.

If there's one bright spot among the bleak figures, Marston said, it's that the coronavirus is forcing officials to get better at moving people inside rapidly. Some 6,000 homeless residents have been sheltered since the outbreak began, she said.

More than half of those were moved into hotels under Project Roomkey, a state program established to get those most vulnerable to COVID-19 off the streets temporarily. The rooms are reserved for those 65 and older and those with existing medical conditions.

The number of those sheltered amid the pandemic is so far less than half the stated goal of 15,000, and county officials have conceded the process was more complicated than anticipated. 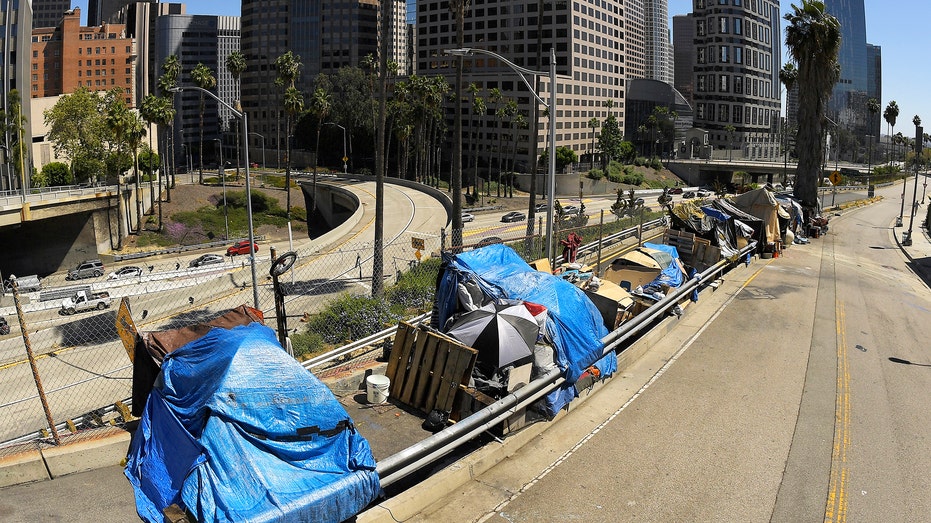 Homeless encampment on Beaudry Avenue as traffic moves along Interstate 110 below during the coronavirus outbreak, in downtown Los Angeles. (AP Photo/Mark J. Terrill,File)

Black people make up 34% of those experiencing homelessness in Los Angeles County, despite representing just 8% of the overall population, according to the data.

"Homelessness is without question a byproduct of racism,” Marston said.

The county’s Homeless Services Authority said it helped nearly 22,770 people move into permanent housing during 2019 — a pace that would have helped rapidly end homelessness if economic pressures had not simultaneously pushed thousands more out of their homes.

“Every day we're helping 207 people find housing, only to have them replaced by 227 new individuals who fall into homeless. That’s every single day,” Ridley-Thomas said.

To reduce homelessness, communities must overcome resistance to the placement of housing and shelters, Marston said.

“We need folks more broadly to say yes” to allowing facilities and services in their neighborhoods, she said.

Of those counted who became homeless for the first time in 2019, the majority cited economic hardship as the primary cause, the authority said. The second most commonly named reason was unstable social networks.

Four years ago, Los Angeles voters approved a tax hike and $1.2 billion housing bond to make a decade’s worth of massive investments to help solve the homeless crisis. That bond money has been committed to build more than half of the 10,000 new housing units planned countywide over 10 years.

Elise Buik, CEO of United Way of Greater Los Angeles, called the measure a down payment. But she said additional strategies were required, including an infusion of private funding. Buik also urged state lawmakers to pass a bill that would require residential properties in some areas to include 20% affordable housing.

Officials estimate 41% of people experiencing homelessness in the county are mentally ill or coping with substance abuse problems.

“City Hall is not reacting to this on any kind of emergency scale. And it is an emergency on our streets,” said Estela Lopez of the Downtown Industrial Business Improvement District. “Sometimes I think those of us downtown are the only ones not numb to the scale of the problem.”

The Skid Row area is “the front line” for homelessness in the city, where violence is common, drugs are prevalent and the smell of human waste permeates the air, she said.

About 67% of all people on the streets of metro Los Angeles are male, around 32% are female, and about .4% identify as transgender or gender non-conforming.