This brutish show should be pensioned off: David Alden’s Lohengrin at the Royal Opera House doesn’t seem to care for Wagner at all

A couple of generations of London-based Wagnerites got their Lohengrin at the Royal Opera from a charmingly romantic production by Elijah Moshinsky.

That all changed after 40 years, when David Alden’s ugly, noisy and frenetic production about fascism began – a sort of ENO circa 1980s show caught in a time warp.

A lot of noise and fury signifying nothing, or at least, nothing much to do with Richard Wagner. 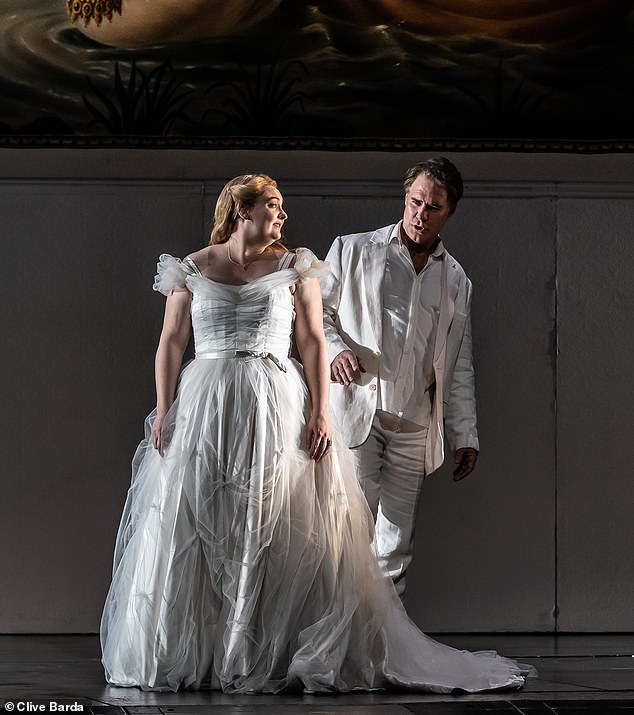 Some of the soloists are well worth hearing, notably Brandon Jovanovich’s Lohengrin. It was also touching that the Royal Opera brings back Jennifer Davis as Elsa (above, with Jovanovich)

The swan, looking as though it was designed for Nuremberg by Albert Speer, dominates the show, and the shabby grey suits and overcoats worn by the chorus look like off-cuts from Al Capone’s tailor. Truly ugly and uninspiring.

Alden is hugely experienced but doesn’t seem to care for Wagner at all. Much of the time he seems to be just having a laugh, either at the composer or those of us who care about his art.

For instance, Lohengrin’s wedding night is mercilessly pilloried. He doesn’t bother to create any chemistry between Lohengrin and Elsa, which ruins an act which is one of the most touching the composer ever wrote.

The militarism has a depressing impact on some of the music- making. The normally reliable conductor Jakub Hrusa often gets his orchestra to play too loud, though some exceptional choral singing mercifully survives.

Some of the soloists are well worth hearing, notably Brandon Jovanovich’s Lohengrin.

It was also touching that the Royal Opera brings back Jennifer Davis, who as a young intern rescued the first staging in 2018, when the original Elsa withdrew.

The Russian Anna Smirnova is a colourful Ortrud, and the Australian Derek Welton is an experienced Wagnerian and makes a good fist of the pivotal role of the Herald.

I think this ugly and brutish show should be pensioned off.

Why not get the classic Rudolf Kempe Lohengrin recording, which does full justice to Wagner’s most lyrical opera.