For Troye Sivan, life has come full circle. Having rocketed to fame as one of the early stars of YouTube in his teens, Sivan, now 25, finds himself uploading content from his bedroom once again.

Now, however, Sivan is a global superstar with a swag of music awards, including ARIA Song of the Year, film credits and a friendship circle that features Taylor Swift and Ariana Grande.

Time called Sivan the "perfect pop star" and he has notched up more than eight billion streams and 1.3 million sales of his first two albums. 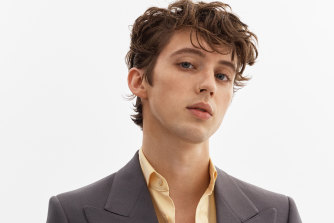 Troye Sivan will release his new EP on Friday.

Sivan, who grew up in Perth, is living with his family in Melbourne after returning from Los Angeles due to the coronavirus pandemic. “It feels like a switch flicked one day and I was 17 again in Perth. I don’t come out of my bedroom and spend every day on my laptop," he says.

But this time around, Sivan has been busy collaborating with a global team on his EP In A Dream, which is out on Friday. He is also preparing to return to a yet-to-be-announced film project – and he is recovering from a devastating break-up.

“I am content and grateful that I am in Australia and that we are all safe and happy,” Sivan says. “For me I am so lucky that lockdown just looks like a frustrating slowdown which sometimes I think I needed anyway.”

But no matter which bedroom on which side of the world he is in, Sivan is doing exactly what he has always wanted to do: writing music and releasing it for the world to hear.

“It's literally all I've ever wanted and, honestly, all I ever want for my future,” he says. “This is the dream and I can't believe it.”

A follow-up album to his hugely successful Bloom in 2018 wasn’t on his immediate to-do list, but Sivan found the words and music flowing when he made two writing trips to Sweden in the midst of the breakdown of his relationship with model Jacob Bixenman.

“I didn’t think I was writing an entire project, I was just taking it day by day and then I turned around and had this potent, concise, weird project that is a time capsule for some of the most intense weeks of my life.”

The six-track EP offers Sivan's most creatively daring and personal music to date.

There's the heartbreaking Easy about begging a lover not to walk away; the melancholy anthem Rager Teenager about running into an ex; Take Yourself Home about confronting depression; Stud reflects on body image and the title track is about only being able to spend time with a ex-lover when you are asleep.

In A Dream meanders from ballad, club beats and driving bass, at times creating a hallucinogenic sound that captures the tempestuous and extreme moods that can follow the disintegration of a relationship.

“Anyone who's going through a major sort of life shift knows the way that it really is like a rollercoaster, and I think that’s why [the record] ended up feeling as chaotic as it does with all these different moments and sounds… it just felt like the only way to really do that experience justice,” Sivan says.

As the release of this EP closes the page on one chapter in his life, Sivan is ready to turn to the next. But lockdown has proven challenging and he doesn't have plans for a full-length album anytime soon.

“I think that's one thing that has suffered for me personally during lockdown; I've not been able to write,” Sivan says. “Collaborating and working with incredible producers is a big part of the writing for me and it’s such a fun part of the process. The thought of recreating that over Zoom seems so uninspiring to me.”

But other creative outlets are offering inspiration. Sivan says he is interested in interior design and documentary filmmaking. “I love the idea of bringing together a couple of my interests and passions, so maybe something on design. I love classic true crime stuff and I am super interested in investigative journalism, so that would be great,” Sivan says.

“Since coming back to Australia and doing quarantine and now the lockdown it’s a lot of sitting in my room on my laptop daydreaming… being creative… that’s what I have done my whole life so this is ok.”

In A Dream is out now.