Labor will seek to legislate a religious discrimination act and scrap the ability of schools to expel gay and transgender students at the same time should it win government, but won’t give a timeline for pursuing the issue in the next parliament.

Tensions resurfaced in the Liberal Party on Sunday as Prime Minister Scott Morrison defended his plan to revive the contentious religious discrimination bill if re-elected, prompting moderate backbenchers to restate their preparedness to cross the floor to protect LGBTQ students. 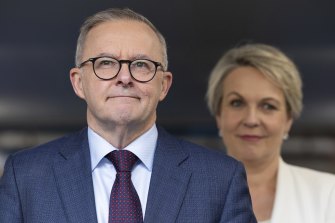 Asked how Labor would approach the matter in government, frontbencher and campaign spokesman Jason Clare said the party had committed to dealing with the issues together by introducing its own religious discrimination bill while amending the Sex Discrimination Act to strengthen protections for LGBTQ students.

“Albo’s already made that commitment,” Clare told the ABC on Monday, adding: “We should be able to tackle both of these problems at once.”

But campaigning in Sydney on Monday, Labor’s education spokeswoman, Tanya Plibersek, declined to lay out a timeframe for how soon Labor would act on its commitment to LGBTQ students.

“Any legislation will be done in the normal way,” she said on Monday. “If we form government, we’ll be consulting widely on the legislation. We certainly don’t want to do what Scott Morrison has done, which is divide the nation by introducing this type of legislation.”

During the debate on the religious discrimination bill in February, the Labor caucus resolved to back a crossbench amendment to scrap s38(3) of the Sex Discrimination Act. This provision gives religious schools a legal exemption to discriminate against students on the grounds of sexual orientation and gender identity – covering both gay and transgender students – including by expelling them.

Five Liberal moderate MPs crossed the floor to support the amendment, ensuring it passed the lower house. But the government shelved the bill before it reached the Senate after a backlash from key religious lobby groups, including the Australian Christian Lobby and Christian Schools Australia.

On Sunday, four of the moderates – Katie Allen, Bridget Archer, Trent Zimmerman and Dave Sharma – signalled they would do the same again as Morrison declared a re-elected Coalition government would deal with the issues “sequentially”, prioritising the religious bill before legislating any protections for LGBTQ students.

“Labor’s statements are a welcome indication they are committed to ensuring any protections for people of faith do not result in discrimination against others, but any such reform must raise the standard for everyone and must not override existing protections,” chief executive Anna Brown said.

Jacinta Collins, executive director of the National Catholic Education Commission, which has long called for a religious discrimination act, said the organisation was open to scrapping s38(3) of the SDA but urged both major parties to prioritise the issues in the next parliament.

“We can work with the approach that either major party has proposed. But we fear this issue remaining unresolved for another election cycle,” she said.