Paul Keating and Kevin Rudd warn the Coalition government will destroy the superannuation system if it bows to pressure to dump legislated increases in employer contributions.

The former Labor prime ministers gave simultaneous press conferences to go on the attack after Treasurer Josh Frydenberg indicated the government was considering the move. 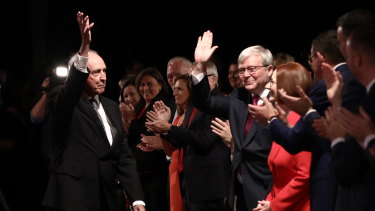 Former prime ministers Paul Keating and Kevin Rudd, pictured at the 2019 Labor campaign launch, have launched a blistering attack on the government over superannuation.Credit:Dominic Lorrimer

A number of backbench Coalition MPs have urged the government to drop legislated increases in the super guarantee levy, which is set to rise from 9.5 to 10 per cent in July then incrementally to 12 per cent by mid-2025.

Mr Keating, the architect of compulsory superannuation, said dumping the increase would be cowardly.

"The government is gearing up to use the COVID health emergency to destroy the superannuation system. Not take a chink out of it, to actually destroy it," he said.

He likened abandoning the increase while allowing people to pull up to $20,000 out of their superannuation accounts through the emergency early access scheme to taking the plug out of a bath and turning off the tap.

"They want to drain the money out of the bottom of the system and stop money come into the top of the system," Mr Keating said.

The latest data shows 3.1 million Australians have withdrawn a collective $32.2 billion from their superannuation accounts early under the coronavirus scheme.

Mr Rudd said Australia had retained its triple-A credit rating because it had "a bucket-load of national savings" thanks to the superannuation system and undermining that would force more people onto the aged pension.

"Scotty, Joshy, think about it again. This is a really bad idea," the former leader said. "He [Paul Keating] and I are angry as hell that this mob have decided, it seems, to take a meat axe to this important part of our national economic future and our social wellbeing."

Both former prime ministers rejected the argument that lifting superannuation contributions now would come at the expense of wage rises – a position put by the government and groups including the Reserve Bank, peak welfare group the Australian Council of Social Service and the Grattan Institute.

"That is the biggest bullshit argument I have ever heard," Mr Rudd said.

Mr Keating has not publicly entered the debate around the superannuation increase until now but it is understood he has had private conversations with Mr Frydenberg urging him to hold the line.

On Monday, he lashed out at the Treasurer for softening the ground in a television interview where Mr Frydenberg said: "We're considering the issue bearing in mind that we are in the middle of a crisis."

Mr Keating said when he was treasurer, he had to open up all Australia's financial markets, do big privatisations, remove tariffs and centralised wage fixing, and fight off "everyone known to man" in doing so.

"What are we asking the Treasurer to do? To knock over half a dozen Liberals … not massive structural changes, knock over a few Liberals who want them to break an election promise," he said.

"If the Treasurer falls for the baby-faced Liberals and the meanness against the workforce of Australia in yet another massive broken promise, what you know is you're going to get no structural changes from him."

Get our Coronavirus Update newsletter for the day’s crucial developments at a glance, the numbers you need to know and what our readers are saying. Sign up to The Sydney Morning Herald’s newsletter here and The Age’s here.