FANTASTIC BEASTS: THE SECRETS OF DUMBLEDORE ★★★★

When you’ve built a piece of literary real estate as popular as the realm that J.K. Rowling constructed for Harry Potter and friends, there’s a powerful incentive to go on extending. 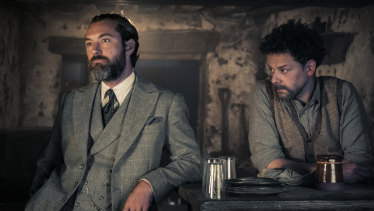 Jude Law (left) stars as a young Albus Dumbledore, with Richard Coyle as Aberforth, in Fantastic Beasts: The Secrets of Dumbledore.

So, we have the latest addition to Rowling’s Potter prequel exploring the early life of Hogwarts’ sage, Professor Dumbledore. This is the third film in the series and there are plans for two more, although some critics condemned the last one for being over-developed with a sluggish storyline clogged by an excess of characters.

This one has a more streamlined design, possibly because Rowling had a co-writer – Steve Kloves, a seasoned hand responsible for all but one of the Potter scripts.

Once again, the youngish Albus Dumbledore is played by Jude Law, dressed in tweeds, but Johnny Depp has been replaced by Mads Mikkelsen in the role of Gellert Grindelwald. The two are arch enemies, a relationship complicated by the fact they were once friends so close that Dumbledore has freely admitted to having been in love with Gellert in his youth.

Eddie Redmayne, at his most wide-eyed and breathless, is also back as the pure-hearted Magizoologist, Newt Scamander. He’s in the mountains of southern China when we first catch up with him, searching for the most fantastic of beasts, the qilin, a delicate creature blessed with exquisite moral instincts. If a qilin bows down before you, you can be assured you are leadership material. While its talents could well be wasted in Canberra, the qilin’s endorsement will be crucial in the imminent election for the new president of the International Confederation of Wizards.

The series’ timeline has now reached the 1930s and much of the story is set in Berlin, where parallels between Grindelwald and Hitler are heartily embraced, although I’m glad to say Mikkelsen has resisted the moustache. But Grindelwald and his desire to dominate or, preferably, enslave all muggles are gaining traction in the wizarding world and he must be stopped.

It’s a very solemn premise, but the producers are right in claiming that the director, David Yates, has tried to inject more fun into the story this time round. Newt and his magical menagerie have moments together that verge on the Chaplinesque and Dan Fogler extracts a lot of fun from his role as the fearless muggle Jacob Kowalski, whose life as a New York baker is overturned yet again by his love for the mind-reading witch Queenie Goldstein (Alison Sudol).

In line with the earlier films in the series, Stuart Craig’s production design is lit in such sombre tones that you could be in a le Carre adaptation, but the globe-trotting plot imparts an epic feel to the whole thing and the heady climax gains a little extra oomph from being shot in Bhutan.

Even so, its sense of intimacy comes through in the underlying theme, which centres on the bonds and tensions within families. The magic is back.