Here are your FOX Business Flash top headlines for April 12.

Video surfaced online of JetBlue passengers begging crew members to let them off a plane after it attempted to land at a New York City airport multiple times, according to multiple reports.

Flight 1852 traveling from Cancun, Mexico, was scheduled to land at New York's John F. Kennedy International Airport on Thursday. The pilot tried multiple times to land at JFK before having to divert to New Jersey's Newark Airport due to inclement weather.

JetBlue spokesman Derek Dombrowski told FOX Business that the plane had to wait on the tarmac at Newark for an hour while the pilot waited for the bad weather to pass. Winds at JFK around the time the aircraft attempted to land were gusting near 35 mph with visibility of about a half-mile and light rain.

"Once it was safe to do so, [the flight] departed again for JFK where it landed and customers on this international flight could properly clear U.S. Customs and Immigration," Dombrowski said.

However, while waiting on the tarmac, the shaken-up passengers implored crew members to let them get off at Newark, saying they were scared to get back in the air. 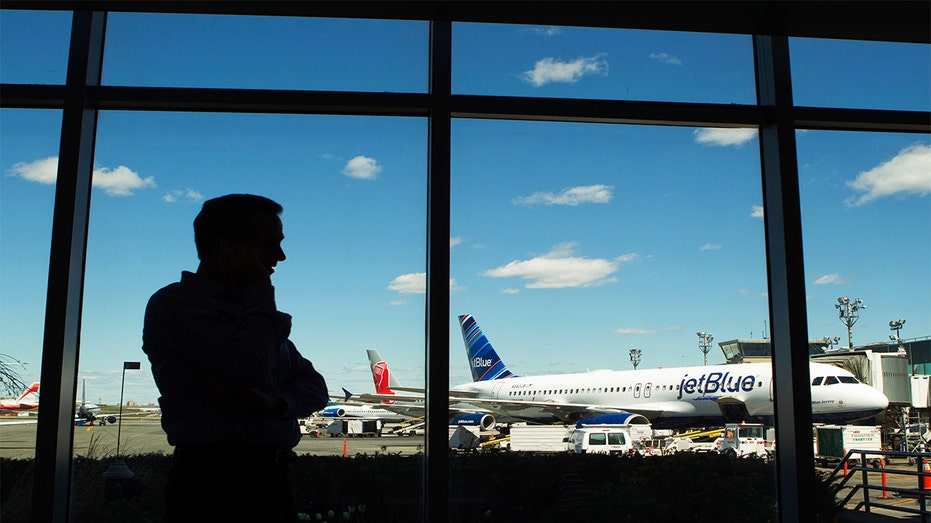 A man talks on his cell phone while looking at a JetBlue Airways Airbus A320-200 plane at LaGuardia Airport in New York. (JetBlue/Reuters/Lucas Jackson / Reuters Photos)

One passenger in the footage claimed the pilot tried to land at least four times in New York and that passengers were already sick to their stomachs.

"My kids are panicking," the passenger said as he stood up out of his seat. "People are sick back there. We gotta get off this plane. It's dangerous … we tried to land four times already."

The passenger claimed that people were fainting and vomiting, and he demanded that the crew members show "a little respect for human beings."

Passengers throughout the cabin echoed his sentiment. At one point, a handful of passengers spoke at once, pleading to get off, according to the video.

"You can arrest me. I don't want to go back up in the air," another passenger shouted.

However, JetBlue said that "the safety of our customers and crewmembers is our first priority, and our pilots are well trained to manage severe weather."

The carrier apologized for the weather-related diversion and said no passenger injuries were reported.