The actor opens up about going from HBO’s We Are Who We Are to the Italy-set Pixar film, meeting costar Jacob Tremblay over DM and feeling “so grateful” about the Shazam sequel.

Jack Dylan Grazer’s latest film, Disney and Pixar’s “Luca,” drops later this month — but has yet to meet a single one of his costars in real life.

The animated movie stars Grazer as Alberto, one of two sea creatures who pull a Little Mermaid and venture out from under the sea and into the small Italian town of Portorosso for one helluva adventure. Also providing voices are Jacob Tremblay as the titular character, Maya Rudolph, Jim Gaffigan and Emma Berman.

Because of the pandemic, Grazer did all his voice work from home, inside his mother’s closet. And, since the world hasn’t quite gotten back to normal yet, he has yet to meet the rest of his costars face to face, making this an unusual project for the 17-year-old star. 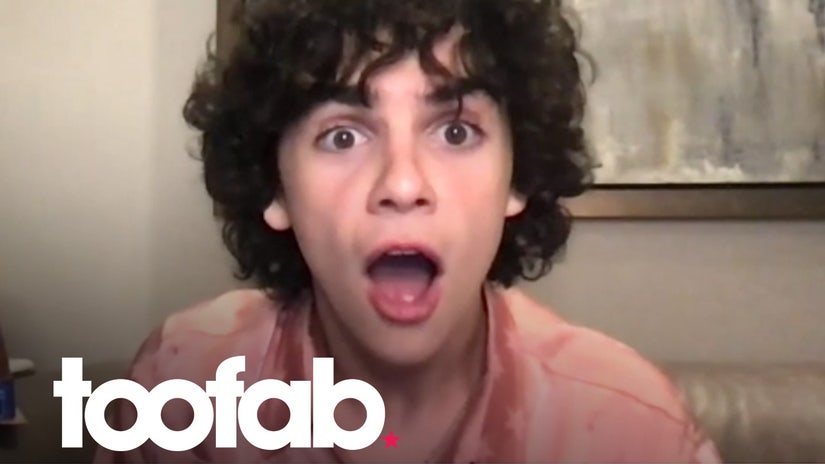 TooFab caught up with him ahead of the movie’s Disney+ premiere, where he opened up about the unique experience of meeting one of his costars via DM, the miscommunication that ensued, what he hopes fans take away from the film and gave updates on both “We Are Who We Are” and “Shazam: Fury of the Gods.”

You recorded all your lines from inside your mom’s closet. What was that experience like, this is your first voice role, right?

This was not my first voice role, I did a few — none of them have come out yet, none of them have been announced. Animation is a beast. This one was actually the quickest one, I did this one over the course of a year and it really feels like it’s gone by so fast. The first session I had was in the middle of lockdown, I did it all in my mom’s closet, but I found out I got the part like two months after I got back from Italy, where we shot “We Are Who We Are” for six and a half months. It couldn’t have been more coincidental and more synchronistic that I had two Italian jobs in a row.

Was it nice to still be in that mode?

Yeah, it was nice.

Having to do all this virtually, have you gotten to meet your costars? Did you have Zooms maybe to get to know each other?

No, never. I’ve been talking to Jacob Tremblay only recently because of these interviews, doing press have we met. He DMed me once a while back saying I think we’re working together, but that was a big miscommunication. He texted me while I was in the auditioning process of this World War II movie, they said Jacob Tremblay’s attached and then two days after I auditioned I got a DM like, “Hey Man, I think we’re working on something.” I was like [gasps], “I got the part for the World War II movie!” No, that movie didn’t even turn out to be real.

How different has this been, working in isolation, not really meeting your costars.

It’s a crazy journey, but the team, the crew, the creative geniuses behind this project, the actors, the animators, the writers, they’ve all put so much hard work into this and they’re so resilient and honestly there should be a round of applause going out to everybody working their butts off during this time. Because it’s been tough for so many people to find inspiration even.

Luca’s friendship with Alberto gives him the confidence to step outside his comfort zone — for you, was there an acting job that really forced you to do that and was there someone who helped you get through it?

The most uncomfortable but enjoyable acting experience I had was probably when I did “We Are Who We Are,” which is an HBO show directed by Luca Guadagnino — I realized I’ve been saying his name wrong for like two years — that was crazy, that was a real crazy challenge but I loved it, it was so much fun. I loved being the tortured actor.

I saw Luca Guadagnino said he’s already written a “bible” for the second season, but what would you like to explore as Fraser should HBO renew it?

Dude, I don’t really know what I can say. I know what it is, I do know what the second season will — if it were to get picked up — would entail. I read the bible. This dude, it’s so intense. It’s so freaky. I’m supposed to be promoting Luca, we’re not talking about this!

Who are you more like, Luca or Alberto, in real life?

Alberto, so much Alberto. My whole life I’ve always had the Silenzio Bruno mentality, silencing all the doubt and all the cautionary signs and going headfirst into whatever it is. I’ve always been the Alberto, getting my friends in trouble. They’d be like, “I don’t know if we should throw this glass bottle off the building,” and I’ll be like, “No, no, no, let’s do it.”

When is the last time you did put “Silenzio Bruno” to the test? [In the film, “Bruno” is the name given to that anxious voice in one’s head, so shouting “Silence Bruno” is Alberto’s way of quieting that inner saboteur.]

Dude, I have no trace of Bruno left in my body. There’s nothing to silence anymore, I have zero doubt. I have nothing but confidence all the time. I am such an alpha. No, it’s not that. I think very impulsively, I’m not very rational sometimes. I’d say I’m a rational person, but when I make decisions like should I jump 80 feet into this lake that could be 5 feet deep? Yes!

How did your real life experience in Italy compare to what we see here on screen? In terms of exploration and maybe the food.

The food! This movie does a really good job of encapsulating the essence of Italy so well . The colors, the hues of blue and red and yellow and sky and sea, it’s so beautiful. I love this movie for that. And also for the message of it all.

We know you have a very vocal fan following. What are you hoping they take away from this, the message for them?

Especially for the youth … there’s so many things to take away. One being to just have fun, enjoy your friends, but also make sure you make friends with someone who lifts you up and helps you to evolve and excel and make you step out of your comfort zone a little to experience the world and to fulfill your curiosities. I think that’s what Alberto does for Luca and Luca helps him reign it in a little and provides that support for him because Alberto is alone in this life. Luca’s a great partner, a great friend for him. Another message, the grandest one to take away from this, is to be comfortable in your own skin and life without fear of judgment and be at peace with your authentic self, you don’t have to hide who you are. And don’t put on a suit for somebody else, put one on for yourself!

Lastly, I need to ask about Shazam: Fury of the Gods real quick. There was that teaser dropped this week with the costume. How excited should we be about Helen Mirren and Lucy Liu joining the cast — and what was your reaction to hearing they were on board?