England endured another disappointing outing with the bat in India, being bowled out for 205 on day one of the fourth Test in Ahmedabad, before a James Anderson strike with the ball briefly lifted spirits late on.

The visitors were again undone by Axar Patel (4-68), as the left-arm spinner took his wicket tally to 22 for his three maiden Test appearances in the series, and this coming on a surface that didn’t turn as much as the one used for the two-day third Test at the Narendra Modi Stadium last week.

Ben Stokes (55) scored a 24th Test half-century, while Dan Lawrence (46), recalled to the side to strengthen the batting, did just that with some useful runs from No 7 in the order, but England never threatened to post a considerable first-innings score despite again having first use of the pitch after winning the toss.

Lawrence, along with Dom Bess, was one of two changes to the touring XI for the final Test of the series, with Stuart Broad and Jofra Archer – still troubled by an ongoing issue with his right elbow – dropping out.

England could yet rue the weakening of their pace attack, with considerable carry and movement off the surface on offer for the seamers throughout the first day. Mohammed Siraj (2-45) bowled nicely for India, taking the key wickets of Joe Root (5) and Jonny Bairstow (28), while Anderson dismissed Shubman Gill with his third ball and reeled off five maidens in a row in a stellar opening spell. 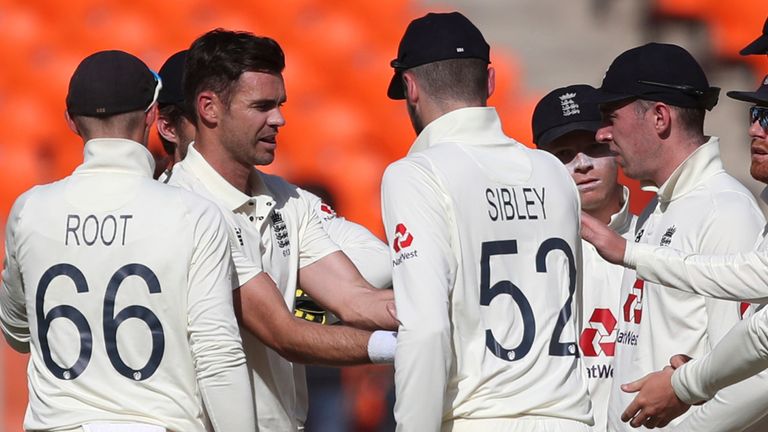 After the early setback, Rohit Sharma (8no) and Cheteshwar Pujara (15no) played patiently and steered the home side safely through to stumps without further alarm, India closing on 24-1.

Earlier, England’s scars from the third Test, and specifically facing Axar, quickly resurfaced after electing to bat first as both openers were sent packing in the spinner’s opening two overs.

With just his second delivery, Dom Sibley (2) was bowled by the straight ball when playing for a turn, a mode of dismissal that is quickly becoming Axar’s trademark against England, while Zak Crawley (9) perished at mid-off when looking to use his feet and go over the top.

The captain too fell cheaply, Root out lbw to arguably the ball of the day, a nip-backer by Siraj immediately after the drinks break in the morning session. It left England reeling at 30-3, but they then enjoyed their best spell of the morning as Bairstow and Stokes counter-punched, building a promising partnership into the lunch break. It would take just 19 deliveries of the afternoon session for it to be undone, however, as Siraj again found sharp movement off the pitch back into the right-handed Bairstow to pin him in front, albeit with the batsman right to feel a little hard done by as the ball was shown to only just be clipping the stumps on ‘umpire’s call’ on height.

Ollie Pope joined Stokes at the crease, who was batting with some assurance and brought up his fifty with a reverse-sweep for four, having already nailed two sixes over the legside. But just as Stokes appeared to be wrestling the initiative England’s way, he was dismissed lbw by Washington Sundar (1-14). 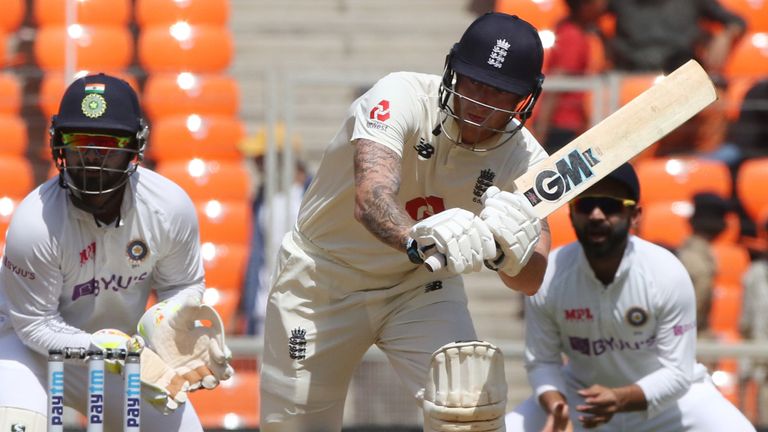 Pope (29) and Lawrence showed promise in a 45-run stand either side of the tea interval, though their partnership would be broken in particularly unfortunate circumstances as Pope inside-edged a ball from Ravichandran Ashwin (3-47) onto his back pad which then looped up to Gill for a simple grab at short leg.

Ashwin added Ben Foakes (1), a routine edge to slip, soon after and then Lawrence perished short of a half-century when stumped skipping down the pitch looking to take on Axar.

While England’s tail did push them over a score of 200 for the first time in the series since their 578 in the first innings of the first Test in Chennai, the tourists are staring down at a third-straight defeat and a 3-1 series loss unless they can fight back with the ball on day two.

Anderson opened up one end with the dismissal of Gill third ball, but Rohit and Pujara made batting look pretty comfortable thereafter to see out the final 12 overs of the first day.

Follow text commentary from day two of the fourth Test between India and England in Ahmedabad on skysports.com and the Sky Sports app from 3.50am on Friday.