How our award winner charmed the Dragons’ Den (with the help of her six kids!) Her business boomed after she won our competition. Then Covid struck and she had to take another brave step…

Alfie and Grace — ten and eight when filming took place in October last year —demonstrated what to do if someone chokes on their food, while twins Emily and Olivia, days off their fourth birthday, put a giant teddy bear into the recovery position and told the dragons to phone 999.

For 42-year-old mum Kate Ball, the founder and a former Daily Mail Aphrodite Award winner, it was the high point of an intensely difficult year, juggling not only a business hamstrung by Covid but, during lockdown, all six children at home all day.

Yes, there are another two mini-Balls — a second set of twins, Poppy and Amelia, who turned three last month. (There are just 20 months between the two sets, a hair-raising figure and a very rare one — the odds of having two sets of twins so quickly are roughly 700,000 to one.) 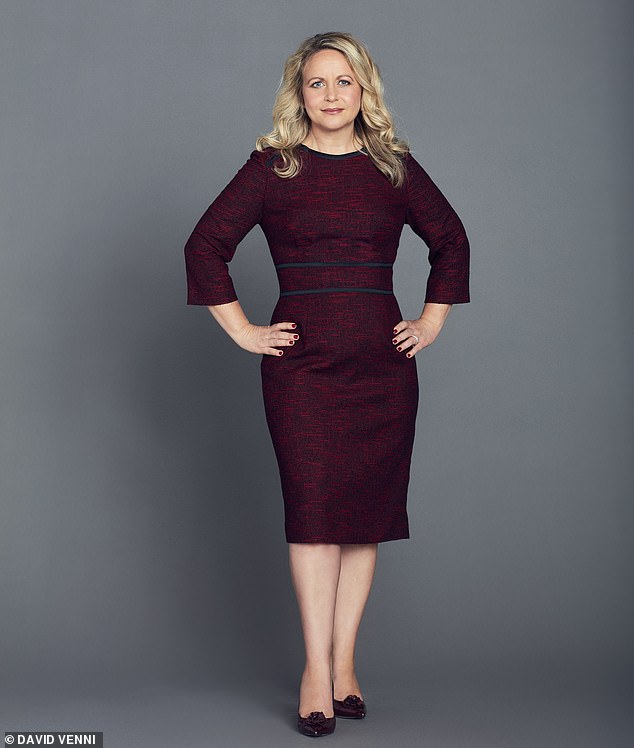 Kate Ball, 42, (pictured) who lives near Leeds, appeared on BBC’s Dragons’ Den last week with four of her six children

‘It felt like such a risk taking the kids into the Den because Emily, in particular, might well have just refused to say her piece,’ says Kate.

‘It was actually more nerve-racking wondering if they’d chat or run off than standing in front of the Dragons answering their questions. The sound crew told us afterwards they could hear my husband Matt and me in that famous lift going up, promising the kids a McDonald’s if they “just do this properly”.’

Upon entering the Den, the first thing Emily did, in fact, was shush Theo Paphitis by putting her finger on her lips and glaring at him.

The pitch was a success and Mini First Aid got its investment — £50,000 from crafting entrepreneur Sara Davies.

But it was Deborah Meaden who voiced what many viewers might have thought as they watched: that an award-winning business with 70 franchisees and products already in John Lewis is doing very nicely for itself and doesn’t need a Dragon’s help.

The truth is more complicated, says Kate. In some ways, Mini First Aid is a lesson in the havoc wrought by Covid on small businesses that rely on face-to-face contact and can’t simply switch to an e-commerce model. It’s not just the hospitality industry that has suffered but many more niche ventures, too.

‘At the beginning of 2020, we’d just launched a baby-proofing course for new parents. We’d secured funding from Savlon to really up our game on first-aid training in schools, the franchises were growing, and we were looking to launch new business in France, Germany and Australia,’ says Kate. 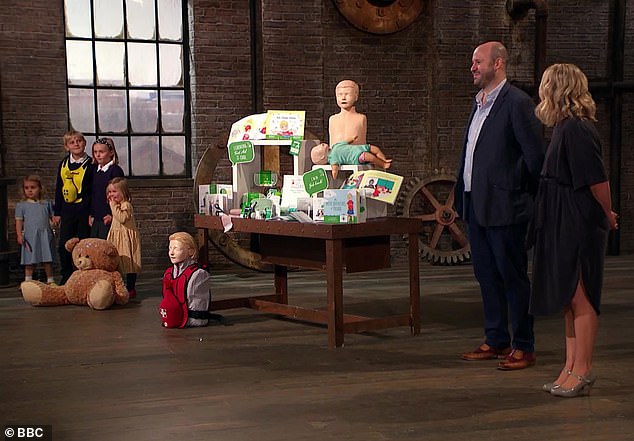 Kate, who won the Mail’s Aphrodite Award in 2017, was inspired to start Mini First Aid following the tragic passing of her younger brother. Pictured: with husband Matt and four of their children in the Den

Boosted in 2017 by winning the Mail’s Aphrodite Award, one of the NatWest Everywoman Awards for female entrepreneurs, the business was on a fast upward trajectory. ‘We didn’t look back after winning it. The Everywoman network is full of the women behind bona fide big brands and it was a huge vote of confidence to join them. We were doing really well.’

Then came lockdown. ‘When classes stopped, our income stopped.’

NOW SEIZE YOUR CHANCE TO ENTER OUR AWARDS

Want to take your business to another level? The Daily Mail/NatWest Everywoman Aphrodite Award gives your venture instant prestige — plus access to an elite group of the UK’s top female entrepreneurs and mentors.

To enter, you must be based, or have your chief operation, in the UK and have set up your business from scratch while raising a child, or children, aged 12 or under.

The deadline for entries is July 5, 2021. For full entry details see: Everywomanforum.com/mpage/everywoman-awards

Meanwhile, she and Matt, who joined the business as director two years after Kate founded it, had to run what was essentially a small school at their home near Leeds. ‘We took it in turns, with one of us working and the other with the children. The kitchen was like a nursery, with a painting station and a crafting area — all the things I love, but when they’re doing them at pre-school, not at home.’

It was around that same kitchen table that Mini First Aid was born in 2014 — inspired by a tragedy she recounted again on Dragons’ Den in response to Deborah Meaden’s probing (‘that was hard — I kept thinking, I must not cry, I must not cry’).

It was on a night out at the end of university exams that Kate’s younger brother, also called Matt, collapsed and died of a hidden condition called cardiomyopathy, at the age of 23.

He wasn’t aware that he had the disease, which weakens the heart and often requires a heart transplant, and when he went into cardiac arrest, no one around him had been taught how to do the chest compression technique CPR. The case of Danish footballer Christian Eriksen, now recovering after a cardiac arrest during a match at Euro 2020 this month, shows why it’s so important to get a heart re-started within seconds of failure.

‘We don’t know whether Matt could have been saved or not,’ says Kate. ‘But it did make me feel passionately about trying to prevent that kind of disaster happening to another family.’

Mini First Aid teaches both kids and adults — parents, grandparents, babysitters — not only CPR but also the basics of other emergency techniques: what to do if a child starts to choke, breaks a bone or has a febrile seizure, and how to recognise the symptoms of meningitis. Franchisees are trained themselves and then run their own classes in school halls or at people’s homes on request.

Except, of course, at the height of Covid. ‘It’s a big challenge to teach first aid on Zoom,’ says Kate. ‘We worked our socks off to raise brand awareness online, but in terms of all that expansion we’d planned, the business came to a grinding halt. 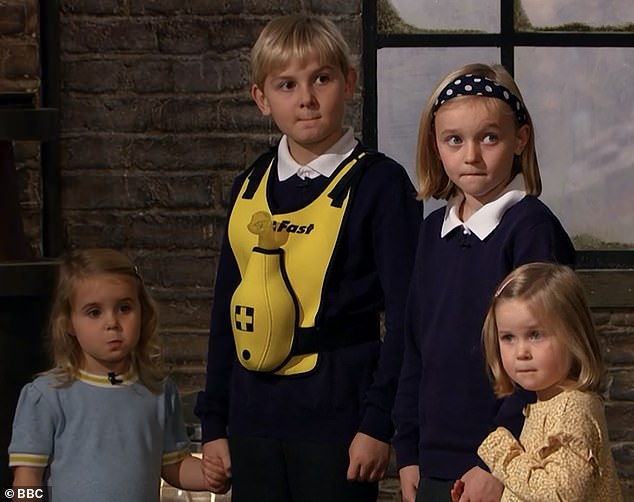 Mini First Aid wasn’t eligible for any cash from the Government during lockdown because it’s a limited company. Pictured: Four of Kate’s children on BBC’s Dragons’ Den

‘It’s been great to get back to face-to-face teaching, but even when restrictions were lifted, constant rule changes meant we had to keep re-briefing franchisees about what they could and couldn’t do. It was different in different parts of the UK, and some venues have had their own rules, too. It’s been a nightmare.’

As a limited company, Mini First Aid wasn’t eligible for any cash from the Government during lockdown, but Kate took out a Covid Bounce Back Loan afterwards. Some franchisees were able to access financial help; others got none at all.

‘Customers are starting to come back now and, though we’ve lost some franchises, we’ve gained others,’ says Kate. With Sara Davies’ investment, she is going to concentrate on the retail side of the business — first-aid kits in funky spotted bags, baby-proofing packs and family travel kits.

The show was a more arduous experience than she had expected — an hour and 45 minutes of questions in the studio, and a huge amount of paperwork afterwards to prove her pitch was accurate and truthful. Business owners who walk away from the Den with a deal don’t always get the money — when the fine detail is examined, some don’t stack up as advertised and the relevant Dragon pulls their pledge. 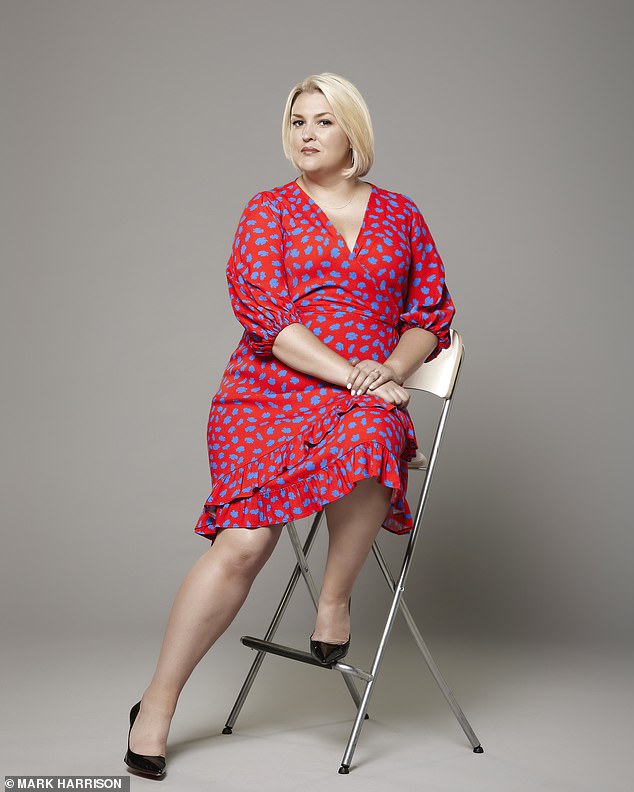 Kate said her children liked the snacks in the dressing room and were given neat little hair-dos ahead of their appearance on Dragons’ Den. Pictured: BBC’s Sara Davies

‘On the day, the kids did their bit and were then taken off set to be looked after by our babysitter — we had to do everything in Covid bubbles. When we came out, Emily and Olivia came bombing towards us, shouting, “Have we got a Dragon?” I said, “Yes, the lady in the spotty dress!”

‘Then we had to go through all the paperwork, and sit on this secret for eight months, not telling anyone until the show went out. It’s a relief to be able to tell people and, after the year we’ve had, a big boost to morale.’

Though children have featured in the Dragons’ Den before, she is, it seems, one of very few to bring her own offspring in. Did they enjoy it? ‘I think they liked the snacks in the dressing room. And they were given these very neat little hair-dos, which I liked. I think they probably did help us get the investment, but I’m not sure I’d recommend it.’

Entrepreneurialism is all about strategic risk, of course, but it takes a hardened mumpreneur to take three-year-old twins into a funding pitch.