Anthony Albanese’s rise through the Labor Party began, literally, in the shadows.

In 1994, when four warring ALP councillors couldn’t agree on who should stand for mayor in a particularly tumultuous lead-up to a Leichhardt mayoral election in western Sydney, a young Albanese was called in to try to settle the matter. 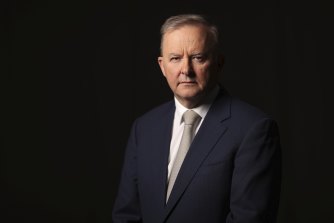 The arm-twisting, back-stabbing and favour-dispensing mayoral imbroglio was filmed in uncompromising back-room detail for a documentary, Rats in the Ranks, still considered a classic of Australian politics.

Albanese, at the time an assistant general secretary of the ALP in NSW, came up with the simple suggestion the warring candidates should pull a name out of a hat.

But politically savvy even then, he made sure he never once appeared on camera. He wanted no target on his back for when he eventually emerged into the mainstream political world. 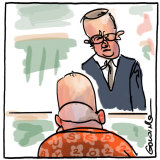 Now, his years as a young backroom operative long behind him – he is 59, and has been a member of the Federal Parliament since 1996 – Albanese is in the uncompromising glare of the political spotlight.

As leader of the federal opposition with an election just weeks away, there are no handy shadows available, though he has spent the three-year lead up to the federal election trying to avoid becoming a large political target.

He clearly wanted the Prime Minister, Scott Morrison, to have that honour in the hope Morrison’s leadership would become a negative for the Coalition.

This appears to have worked, but it has exposed Albanese to the criticism he has little public profile upon which to campaign, and that he and his party’s policy details are unclear.

Albanese bridles at such criticism, but his small-target approach clearly came directly from the ALP’s internal review of the failed 2019 campaign.

Given Shorten previously beat Albanese for the Labor Party’s leadership, Albanese, who was appointed leader unopposed after Shorten stood down after the 2019 election, now has to prove to his colleagues he has learned the critical lessons.

He has some history on his side.

While Shorten was judged poorly for having been intimately involved in tearing down the leadership of two Labor prime ministers – Kevin Rudd and Julia Gillard – Albanese spent the fraught period as a relatively unifying figure within Labor.

He served as leader of the House of Representatives through the administrations of both Rudd and Gillard, winning a reputation for possessing unusually effective negotiating skills.

Even during the minority Gillard government – the first hung parliament in 40 years – Albanese won the support of crossbench MPs to shepherd through virtually all of Labor’s legislative program.

He also maintained his cabinet post as minister for infrastructure and transport throughout the lives of the Rudd and Gillard governments.

One of his initiatives was the establishment of Infrastructure Australia, an independent statutory body to advise the government on infrastructure priorities, after which he won support for significant increases in road and rail funding.

One of his last jobs as infrastructure minister was to open the Hume Freeway as a dual carriageway bypassing all towns from Sydney to Melbourne.

Though these were not politically spectacular achievements, Albanese built a reputation for discipline and toughness.

His toughness went on display in Parliament earlier this year when he told Defence Minister Peter Dutton to “sit down, boofhead”.

His discipline was clear in his response to the Morrison government’s big-spending budget last week.

While the government concentrated on cost-of-living handouts to motorists and householders and infrastructure promises focused on politically strategic electorates, Albanese limited his main pledge to $2.5 billion to tackle shortcomings in aged care.

Finally, Labor’s nagging question is about to find an answer.

Can Anthony Albanese, the backroom fixer from way back, win enough public recognition during a short election campaign to return his party to government, nine years after it was consigned to the shadows?

Jacqueline Maley cuts through the noise of the federal election campaign with news, views and expert analysis. Sign up to our Australia Votes 2022 newsletter here.