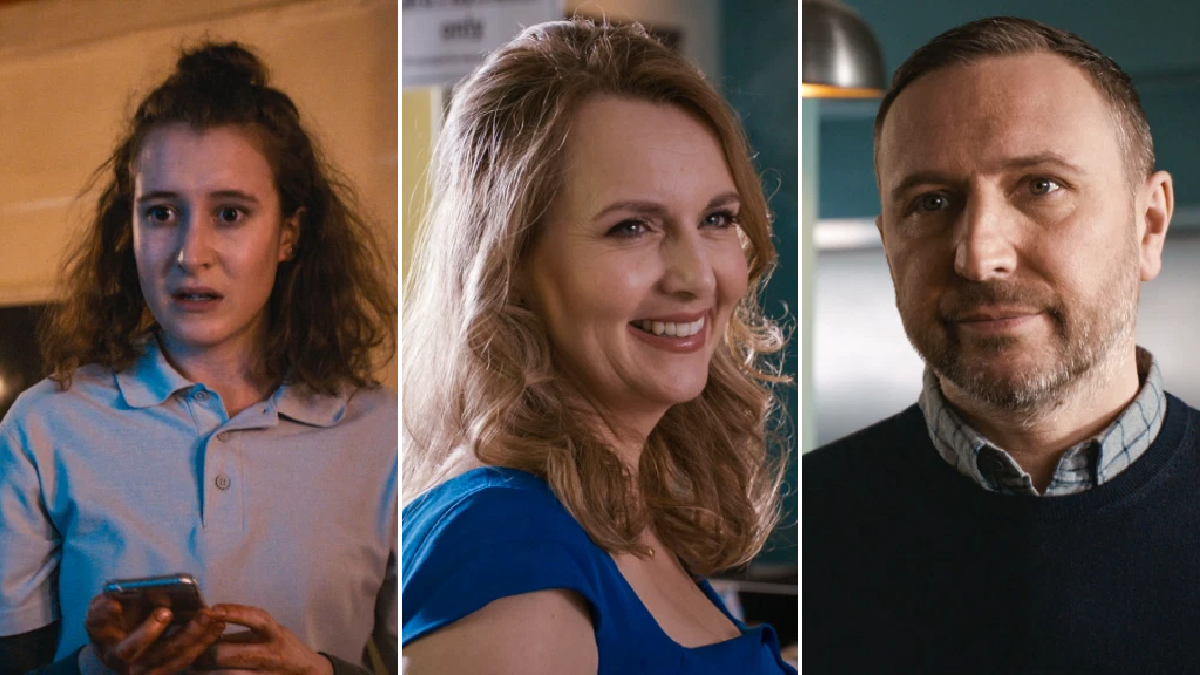 It was an emotionally fraught episode for Max McGerry (Jo Martin) in tonight’s Holby City, as she faced a double mastectomy to try to lessen her chances of getting breast or ovarian cancer. As a doctor Max is used to weighing up the odds and doing the best for her patients. As a patient herself she obviously couldn’t think so rationally and clearly – she was petrified about how she would feel about her body after the operation. Would she still feel like as much of a woman as she was before? Would she still be attractive?

She had no shortage of friends and supporters ready to help – in fact when she came round from the anaesthetic there was quite a welcoming committee gathered around her. Of these, it was really only her son Louis (Tyler Luke Cunningham) that Max wanted. As someone who’s been through surgery to transform his body image (for the better in his case), Louis had a special understanding of what Max was going through, ‘The disconnect between who you know you are inside and who you see in the mirror.’

Mother and son have been gradually getting closer over the months – with the odd setback – and in these scenes they seem to have finally mended the fractures between them. ‘From now on it’s you and me against the world,’ Max promised her son, though Louis, who’s always a realist, suggested they start a bit smaller than tackling the whole world.

Max’s surgery had been done by Dominic Copeland (David Ames) after she realised she didn’t want her former boyfriend Treve (Karl Collins) operating on her. Like Louis, Dominic has his own perspective on how a surgical procedure can affect your body image, and he was sensitive and sweet with Max. In fact for much of the time Dominic was almost his old self, apart from when he was throwing his weight about as Keller’s new clinical lead, a job for which he seems to be spectacularly under-prepared.

After Louis had thanked Dominic for the way he looked after Max and said something about not holding grudges, Dominic started looking thoughtful and pondering a box that contained what seemed to be some of Sacha’s spare shirts. Then he made a call to Hanssen – could he have changed his mind about his betrayal of Sacha?

Pill-popping Kian (Ramin Karimloo) was barely holding things together at the beginning of the episode, but managed to do a spot of emergency suturing when Evie Fletcher (Phoebe French) found Andrei (Sonny Poon Tip) in the basement with a stab wound to his abdomen.

Fletch (Alex Walkinshaw) was furious when he spotted his daughter covered in blood after she’d been roped in to help Kian, and insisted that Lucky Simpson (Vineeta Rishi) ring social services about Andrei at once. But by the end of the episode, as Kian announced that he had Andrei’s essential heart surgery scheduled for tomorrow (which is probably next week in Holby time), it wasn’t clear whether Lucky had really gone through with the referral after all.

Fletch may have other things to worry about soon as it seems his new girlfriend Jeni Sinclaire (Debra Stephenson) may not be as nice as he thinks she is. A patient who had a dislocated shoulder and bruising was warned in no uncertain terms by Jeni to get out of the hospital at once. ‘Come here again and you’ll have more than a dislocated shoulder to worry about,’ she threatened, turning nasty at the drop of a hat. So what’s the story there, then?

Fo light relief and romance we had Ange (Dawn Steele) and Josh (Trieve Blackwood-Cambridge) getting closer, despite an annoying misunderstanding earlier in which each of them pretended to care less than they really do. Once that was resolved they were all smiles – but when Chloe (Amy Lennox) saw them walking out of the on-call room together hand in hand she was most certainly not smiling.

She was busy wishing she hadn’t spent the rest of the day sending selfies of herself to Josh in the hopes of attracting his romantic attention. Ouch.

Sue Haasler is the author of five novels and the official BBC Holby City book, which you can read about here.