It was a splendid birthday party. The thirteenth anniversary of the Melbourne Recital Centre heralded the welcome return of one of Melbourne’s best kept secrets, the MRC’s Great Performers series. Before COVID, this series had been hiding in plain sight, alas not always enjoying the wholehearted support its excellent artists, programming and venue might command. 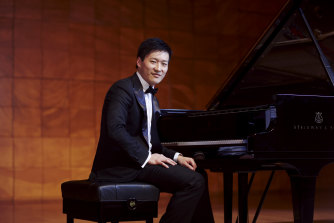 Launching this year’s series, cellist Li-Wei Qin and pianist Kristian Chong delivered an utterly absorbing program, beginning in uncompromising fashion by diving into the deep waters of Samuel Barber’s Sonata for Cello and Piano, Op. 6. At once simple and complex, volatile and voluptuous, this astounding work, written while the composer was still in his early 20s, demands enormous versatility from its performers. Qin and Chong did not disappoint, bringing searing intensity and vivid colours to the work’s bolder statements while adding subtle sensuality to its more romantic utterances.

By contrast, both players brought an uncomplicated, sunny optimism to the opening of Schubert’s Sonata for Arpeggione and Piano in A minor. Qin’s beguiling lyricism and carefully shaped phrasing were a delight throughout. Honouring Dame Elisabeth Murdoch, after whom the hall is named, on the 113th anniversary of her birth, the performance of the central Adagio was graced with a profound and gentle beauty, counterpointed by the sprightly finale.

Schumann’s Adagio and Allegro saw the duo revel both in the ardent romanticism of the Adagio and the cascading energy of the Allegro. After such an ebullient conclusion, two softer encores (a jazz-infused arrangement of Somewhere Over the Rainbow and Elgar’s Salut d’amour) sent listeners home on a high.

Hearing this compelling combination of consummate musicianship and interesting repertoire live in ravishing acoustics was balm for the soul. Hopefully future Great Performers concerts will draw more concertgoers to experience such pleasure for themselves.

A cultural guide to going out and loving your city. Sign up to our Culture Fix newsletter here.