Now THAT’S commitment to the shirt! Over-excited England fan throws himself on to the Wembley seat coverings to grab Jack Grealish’s jersey… with Raheem Sterling and Luke Shaw also chucking their kit to supporters in the stands

England stars Raheem Sterling, Luke Shaw and Jack Grealish all chucked their match shirts into the crowd on Tuesday night, resulting in a hasty fall for one over-excited fan!

Gareth Southgate’s side secured top-spot in Group D at Euro 2020 as Sterling’s 12th-minute header secured three points at Wembley against the Czech Republic.

And after the contest, three of England’s starting XI threw their worn tops into the crowd, while one supporter did not hold back as he attempted to grab Grealish’s shirt. 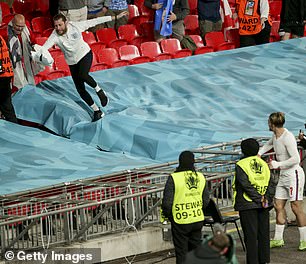 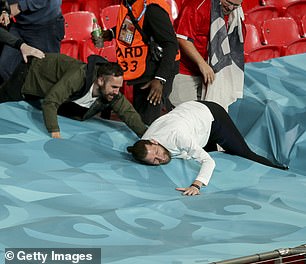 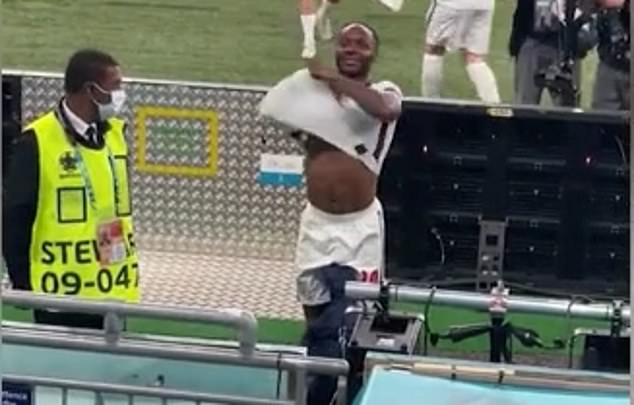 The Aston Villa captain, who set up Sterling’s first-half goal, threw his No 7 England shirt and the fan leapt to grab it, landing on the coverings over empty rows of seats.

Yet the thrilled fan looked delighted with the end-result as he nabbed the shirt off of one of the stars of the evening.

There was much clamour for Grealish to start after he started on the bench in the first two games against Croatia and Scotland and the winger showed his quality from the off, setting up Sterling with an inch-perfect cross to the back post.

Sterling, meanwhile, scored his second goal of the tournament after netting the winner in the opener against Croatia too, and removed his match shirt by the stands afterwards.

Shaw, starting his second game in a row, played 90 minutes at left back and also threw his shirt to a fan who posed afterwards on Instagram, saying: ‘Oh my god, it’s match worn – it’s f****** soaking! 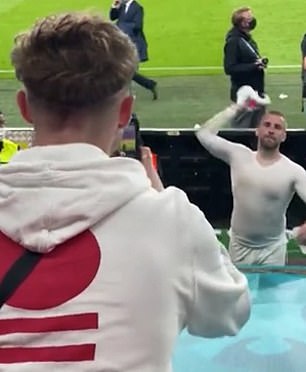 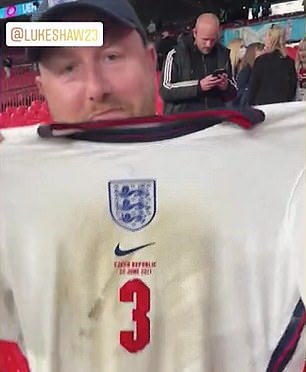 There is minimal coronavirus-spread risk by players throwing shirts into the crowd, given they have been tested and do not come into ‘close contact’ with supporters.

England will play their last-16 game at Wembley next Tuesday, where they will play the runner-up from Group F, which includes France, Germany and Portugal.