The children’s author CANCELLED by her publisher after backing J.K. Rowling: GILLIAN PHILIP tells how she was left to fear for her young readers in a world where daring to speak your mind can spell disaster 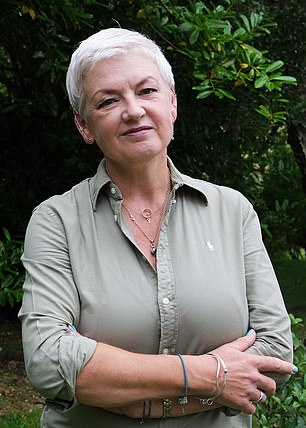 The first sign of trouble was the unusually high number of new Twitter notifications that had pinged overnight on my mobile phone, writes Gillian Philip, who is pictured above

The first sign of trouble was the unusually high number of new Twitter notifications that had pinged overnight on my mobile phone.

As a successful author with an established social media profile, I’m used to a steady stream of messages, but this ran to hundreds. And the tone of them was different – horribly so.

Instead of chat from book-lovers, there was an onslaught of abusive tweets – anonymous, of course – that contained among them threats of death and sexual violence.

In case that was too subtle, several contributors decorated their messages with images of guns. ‘I’m going to punch u in the throat’ declared one of those that are printable.

It was far from a pleasant start to my day but, if I’m honest, I had been expecting at least some negative reaction.

The reason? I had dared to offer support on Twitter for J.K. Rowling’s stand against allowing transgender people to self-identify as male or female.

What did surprise – and devastate – me was the cataclysmic fallout over the next 24 hours of posting the simple hashtag ‘#IStandWithJKRowling’. I couldn’t have dared to imagine the damage that it was possible for a faceless mob of trolls to inflict.

But much more of a shock was the spineless way that my publishers capitulated in the face of this foam-flecked online protest.

They summarily sacked me and, in doing so, destroyed my livelihood without making any attempt to hear my side of the story.

My writing career began in the early 2000s when my twins, now aged 19, started at school.

I initially wrote young adult books under my own name and was then invited to work for what is called a book packaging company.

These are the middlemen of children’s literature who come up with an idea for a series of books, gather a team of authors to write under one pseudonym and then present the finished product to a publisher.

After a few years I was hired by London-based Working Partners and joined a team writing animal fantasy novels for children aged between eight and 12 under the name Erin Hunter. 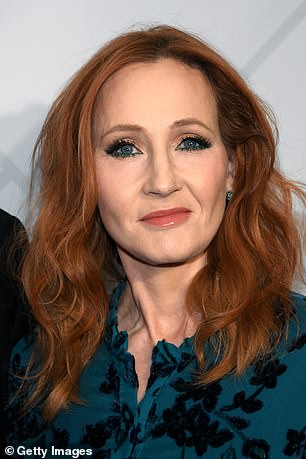 What did surprise – and devastate – me was the cataclysmic fallout over the next 24 hours of posting the simple hashtag ‘#IStandWithJKRowling’. I couldn’t have dared to imagine the damage that it was possible for a faceless mob of trolls to inflict. J.K. Rowling is pictured above

I loved the work and before long it came to represent 80 to 90 per cent of my income. I am mindful of the age of my readers and it was important to me that younger people were able to experience different lives and put themselves into other people’s heads through my books.

I carried out eight promotional tours of the US for Erin Hunter’s publisher HarperCollins. The brand is huge in America and I would travel from California to Kentucky meeting young fans in schools and bookshops and sharing with them my love of writing.

I already had a professional Twitter account and was soon being followed by many Erin Hunter fans.

However, a few years ago, and before the J.K. Rowling controversy, I tweeted my opinion on the self-identification issue – something that my agent advised against.

I’m not remotely transphobic, but the idea that a man can simply declare himself to be a woman, fully intact, without surgery or hormones, and be allowed into women’s prisons or hospital wards is a crazy situation that I sometimes want to shout about.

So I set up an anonymous account and used that to express those opinions, leaving my professional account for promoting my books.

Then, late last year, a friend of mine, the poet Rachel Rooney, was accused of transphobia. She had written a really sweet picture book called My Body Is Me about body positivity and how no one’s body is wrong.

Her ‘crime’ was that she wrote the book to counteract what she described as an ‘explosion of titles promoting the idea that children who felt confused about their gender may be “trapped in the wrong body” ’.

She received such a vicious backlash – not only from activists, but also other authors – that she actually gave up children’s writing.

I was angry about that and told my followers as much, but also directed them to my anonymous account should they wish to hear my views ‘for adults’.

At that point, the managing editor of Working Partners, James Noble (more of him later), who was already a follower of my professional account, simply followed my personal account as well.

Then the J.K. Rowling controversy exploded in June. As people will recall, she retweeted an article referring to ‘people who menstruate’ and questioned why it avoided using the word ‘women’.

It was greeted by an avalanche of criticism from the trans lobby, along with some of the actors who had enjoyed so much success as a result of the Harry Potter films, including Daniel Radcliffe, Emma Watson and Rupert Grint.

After she wrote an essay in response, revealing that she was a survivor of domestic abuse and arguing that allowing trans women access to single-sex spaces was a danger to women, I felt morally unable to stay silent, so added #IStandWithJKRowling to my Twitter handle.

I know a lot of writers who disagree with the hardest line of trans ideology – that anyone has the right to legally self-identify as whichever gender they please – yet are far too scared to speak out. But I wanted to be able to look at myself in the mirror in the morning.

However, no level of furious response that I could ever have anticipated matched the venom I received.

I tried blocking the abusers, but they switched to other accounts and kept pursuing me in greater and greater numbers.

Some people would have ignored it but I felt that I could not. I was getting riled and retweeted some of the comments, adding my own comebacks such as, ‘Not very original’.

Yes, I was snarky and snippy but no worse than that because a lot of my followers are minors (although there was no way of telling if my tormentors were children or 30-year-old men living in their mums’ basements).

Soon emails began to arrive on my website and Facebook page. I took a screenshot of one abusive email and tweeted it.

To my regret, I forgot to blank out the sender’s address, sparking a fresh wave of vitriol from people claiming that I’d ‘doxed’ [published private identifying information of] a minor. In fact, as I later learned, it was a fake email address.

That night, I crawled exhausted into bed at 5am and woke a few hours later to find several missed calls from my agent. When I called her back, she said that Chris Snowdon, the managing director of Working Partners, wanted to speak to me.

He was quite sympathetic, but explained that he didn’t know how HarperCollins would react and we would have to wait until 9am New York time (2pm in London) for their response.

I was concerned, but not unduly, since the people at HarperCollins had always praised my writing and I’d twice completed US book tours for them despite family medical emergencies back home.

Moreover, I’d never been particularly struck by signs of ‘wokeness’ at the company. They are, after all, part of Rupert Murdoch’s empire and will later this year publish Piers Morgan’s new book Wake Up, billed as an attack on the very ‘cancel culture’ of which I was about to become a victim.

However, the news from New York was devastating. ‘HarperCollins say you’re out,’ Chris told me.

I was technically dismissed by Working Partners rather than HarperCollins, as my contract was with them, not the US-based publisher. But although HarperCollins insist that they played no role in the decision, I believe they were calling the shots.

Initially I was told the reason for my dismissal was because of the tone I’d taken with those who had abused me on Twitter. Some might argue that responding with comments such as ‘Bring it on, homophobes and lesbian haters’ kicked the hornet’s nest.

I can only ask them to imagine how they would feel coming under relentless, hate-filled attack for hours on end.

My agent told me that HarperCollins would be issuing a public statement. Instead, it was James Noble at Working Partners who sent an email to those who had complained. As soon as I saw it, it was clear it was my views, rather than my behaviour, that had led to my dismissal.

‘The worlds created by Erin Hunter are meant to be inclusive for all readers and we want to let you know that Gillian Philip will no longer be writing any Erin Hunter novels,’ he wrote.

Confusingly, I was given an entirely different reason by Working Partners, via my agent, a few days later. This time, they claimed I had ‘sworn’ at a fan during the Twitter row.

I have no memory of this and do not believe that it happened. By then, I’d deleted my accounts, but asked for evidence to support their assertion. Working Partners replied that doing so ‘wouldn’t be helpful’.

If, in a moment of rage, I did swear (and I don’t believe that I did), it seems likely to me that one or more of the trolls would have gleefully taken a screenshot to plaster across the internet – and I’ve never seen it.

When The Mail on Sunday published a story about my sacking, HarperCollins provided a comment to the newspaper that made me sound like a distant relative, rather than someone who had written many of their successful books. 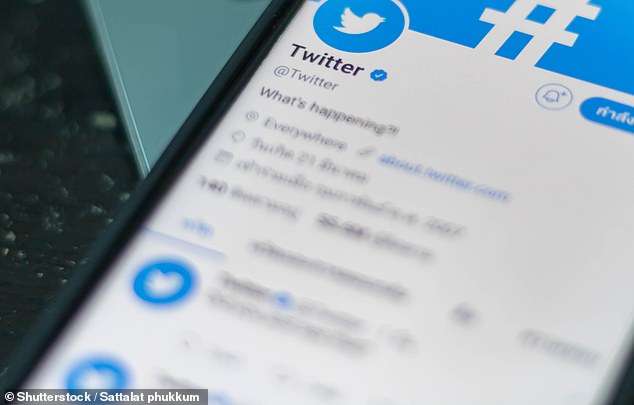 I tried blocking the abusers, but they switched to other accounts and kept pursuing me in greater and greater numbers. Some people would have ignored it but I felt that I could not. I was getting riled and retweeted some of the comments, adding my own comebacks such as, ‘Not very original [File photo]

‘HarperCollins UK does not have a contract with this author, we have no direct relationship with her and we have not sacked her,’ it stated.

This jars with a letter I have subsequently received from Working Partners stating they were informed by the ‘primary publisher’ [HarperCollins] that they were ‘no longer able to proceed’ with books 8 and 9 of Erin Hunter’s Bravelands series with me as the author.

Both HarperCollins and Working Partners declined to comment to The Mail on Sunday about my case last night.

Now, as I contemplate writing again as myself rather than Erin Hunter, I’m left asking if ‘cancellation’ has become the default corporate response to mob pressure.

Despite a record of good work and dedication, I wasn’t consulted by HarperCollins before the axe fell. Instead, they chose to listen only to an anonymous band of trolls.

Surely we should be teaching children how to think and how to engage in reasoned argument so that they listen as well as shout? Instead, the message is, ‘Join a Twitter pile-on and get a grown-up cancelled within 24 hours’.

Instant gratification for young keyboard warriors, but what a dismal lesson for life.