The Foo Fighters are a band born of tragedy – formed in the wake of the death of Nirvana frontman Kurt Cobain in 1994.

Dave Grohl, a member of both, has now suffered yet another devastating loss in Taylor Hawkins, who passed away while the Foo Fighters were on tour in South America.

Hawkins, 50, was found dead in a hotel room in Bogota, Colombia, where the band were due to pay at a festival on Friday night. No cause of death was immediately confirmed, but local media claims the drummer had been suffering from chest pain.

The band said it was ‘devastated by the untimely loss’, adding: ‘His musical spirit and infectious laughter will live on with all of us forever. Our hearts go out to his wife, children and family, and we ask that their privacy be treated with the utmost respect in this unimaginably difficult time.’

Hawkins played in the Foo Fighters with former Nirvana drummer Dave Grohl on vocals for more than two decades, alongside Nate Mendel, Pat Smear, Chris Shiflett and Rami Jaffee. He joined in 1997 following the departure of the band’s previous drummer, William Goldsmith.

The loss of Hawkins will come as a devastating blow to Grohl, who lost another bandmate in Cobain in 1994. The Nirvana frontman, 27, was found dead at his home in Seattle, Washington, on April 8 – three days after suffering a fatal gunshot wound. 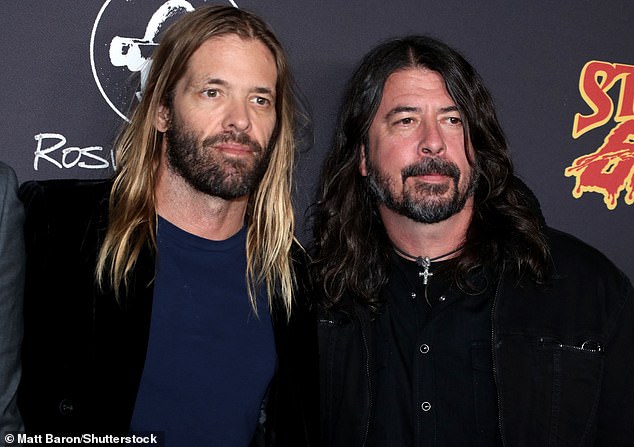 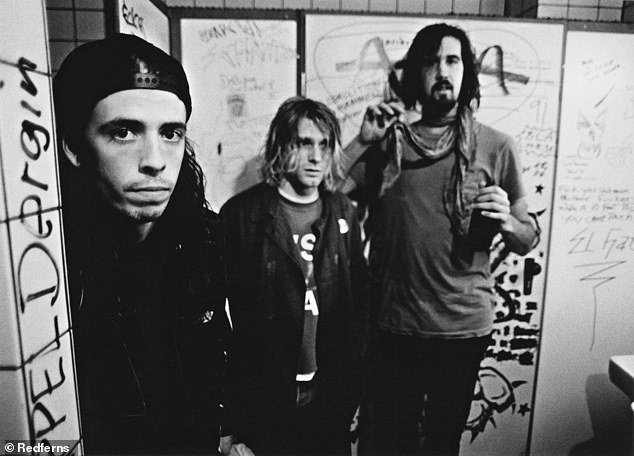 Around a week earlier, Cobain had checked out of a rehabilitation clinic in Los Angeles without telling his family or friends. He disappeared for a few days, prompting his wife Courtney Love to hire a private detective to find him on April 3.

He was located the following day in Seattle, but refused to return home to Los Angeles.

Grohl, who played in Nirvana with Cobain from 1990 to 1994, previously described the day he heard of the frontman’s death as the ‘darkest’ of his life, saying ‘not a day goes by’ when he doesn’t think of Cobain.

However, in his memoir The Storyteller: Tales of Life and Music, Grohl explains he was told of the late vocalist’s death twice – once at the start of March and again in April.

Grohl says he first received a call on March 3 to say Cobain had overdosed at a hotel in Rome, according to the New York Post. He wrote: ‘My knees gave out and I dropped the phone as I fell to my bedroom floor, covering my face with my hands as I began to cry.’

But he then got a second call to say Cobain was still alive, and would likely survive. 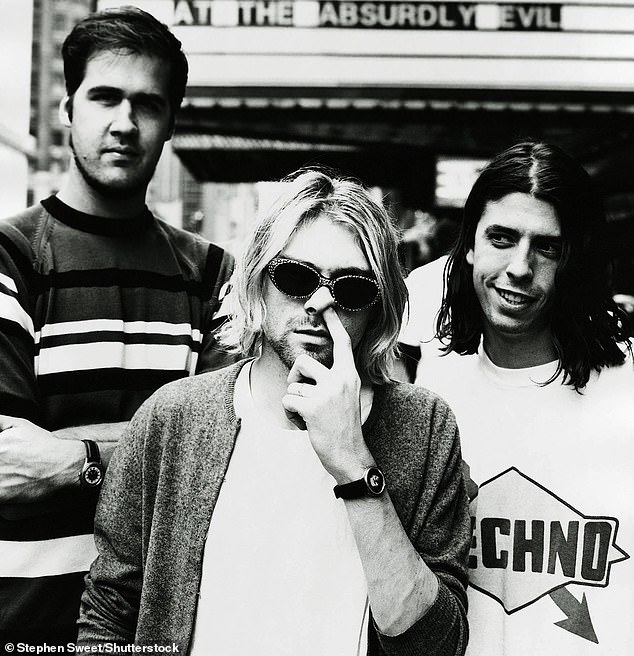 The loss of Hawkins will come as a devastating blow to Grohl (right), who lost another bandmate in Cobain (middle) in 1994. Pictured left: Chris Novoselic 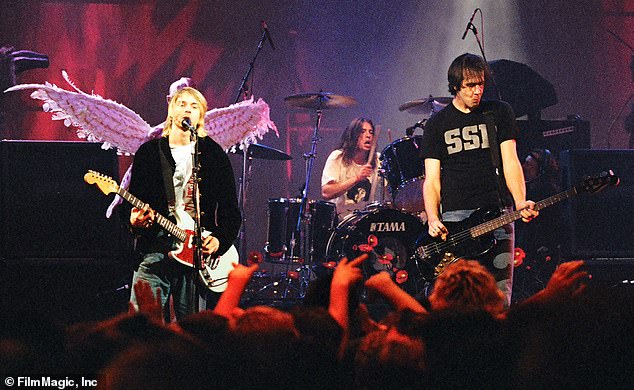 Despite the glimmer of light on what Grohl described as the ‘darkest day’ of his life, it was little over a month later when he was dealt this devastating news again – but this time, the second call never came.

He wrote: ‘This time it was for real. He was gone. There was no second phone call to right the wrong. To turn the tragedy around. It was final.’

Not long after this devastating news, Nirvana disbanded.

Grohl told Louder in 2018 that he was immediately asked to join several other bands as a drummer, but “couldn’t imagine doing that because it would just remind me of being in Nirvana”.

“Every time I sat down at a drum set, I would think of that,” he said. 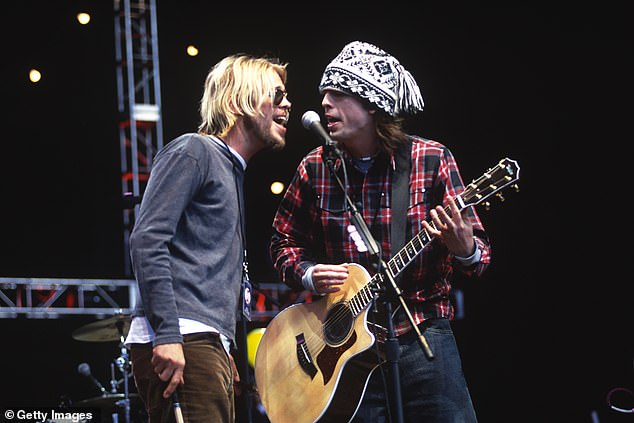 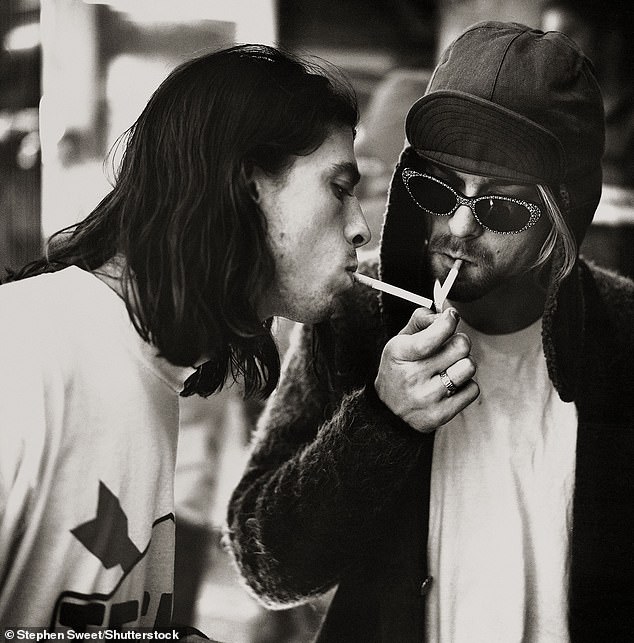 The Nirvana frontman (right), 27, was found dead at his home in Seattle, Washington, on April 8 – three days after suffering a fatal gunshot wound. Pictured left: Grohl 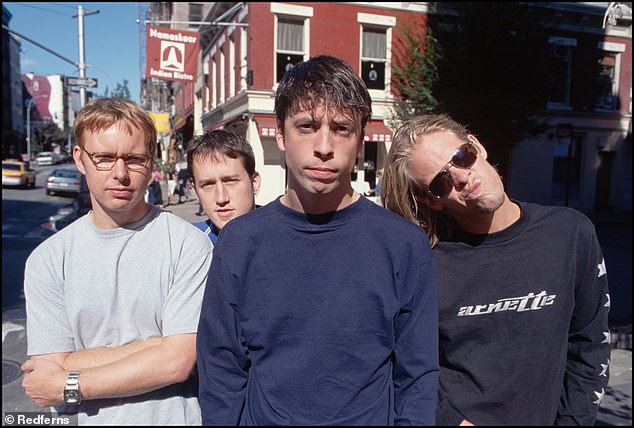 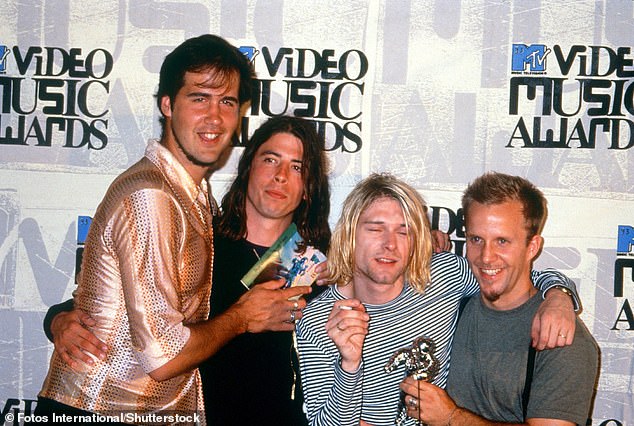 Grohl, who played in Nirvana with Cobain (second from right) from 1990 to 1994, previously described the day he heard of the frontman’s death as the ‘darkest’ of his life

Hawkins joined in 1997, after Goldsmith claimed he was essentially fired from the Foos. This was disputed by Hawkins, who said his predecessor essentially “buckled under the pressure”.

He was inducted into the Rock and Roll Hall of Fame with them in 2021 by Sir Paul McCartney.  Prior to joining Foo Fighters he had played drums for Alanis Morissette.

Tributes have poured in for Hawkins following news of his death, with Nickelback, Ozzy Osbourne and Billy Idol leading the messages. 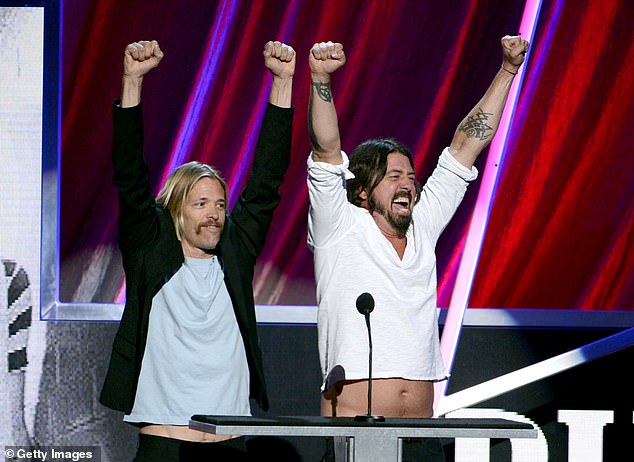 ‘In utter disbelief at the news of Taylor Hawkins. Our deepest condolences to his family, his bandmates, his team, his friends and everyone that was ever touched by the music he created with @FooFighters, @Alanis and so many others. This is so incredibly sad,’ wrote Nickelback on Instagram.

Ozzy Osbourne praised Taylor Hawkins as a ‘great person and an amazing musician,’ and promised to ‘see him on the other side.’

Hawkins was born in Fort Worth, Texas, in 1972 and raised in Laguna Beach, California.

He is survived by his wife Alison and their three children.