The Morrison government is verging on a breakthrough on its troubled $90 billion submarine program after months of tense negotiations with French company Naval Group over cost blowouts, delays and local content requirements.

After reports Australia was willing to walk away from the multibillion-dollar deal, new in-principle agreements all but lock in the French company to building 12 new attack submarines to replace the ageing Collins-class fleet. 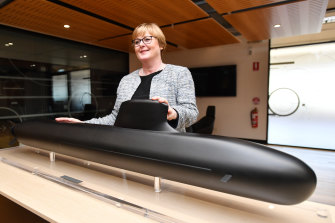 Defence Minister Linda Reynolds during a visit to Naval Group in Adelaide last year. Tensions between Australia and the company have been building in recent weeks over the $90 billion submarine project.Credit:AAP

Following a three-week visit to the country by Naval Group’s global chief executive Pierre-Eric Pommellet, the Paris-based company has reached a critical deal with Defence officials covering the next two years of the project.

The government had rejected Naval Group’s original plan for the program’s next phase but the company last week submitted its revised plan, which was developed in consultation with Defence officials.

The deal – which still needs to be ticked off by the government – includes ongoing construction of Naval Group’s Osborne shipyard in Adelaide, the development of Lockheed Martin’s combat systems, a testing facility and the completion of detailed design work.

The Morrison government had grown increasingly concerned about cost blowouts, schedule slippages and commitments to use local contractors.

While government sources had not ruled out going with an alternative to the French-built submarines, they conceded it was unlikely. The government is expected to take months to formally sign off on the new proposal.

A separate in-principle agreement, likely to be inked in the coming weeks, will require Australian content to be agreed upon for each stage of work to achieve Naval Group’s commitment to spend 60 per cent of the program cost within Australia during the life of the project.

The company’s Australian chief executive John Davis said he and Mr Pommellet had “very constructive and welcoming meetings with ministers and defence officials during his visit to Australia last week”.

“I believe significant progress has been made on the Commonwealth government and Naval Group’s joint plans to continue creating Australian jobs,” he said.

“Naval Group looks forward to being able to contractually cement that shared commitment with the Commonwealth, and building even greater sovereign capability in Australia.”

The Sydney Morning Herald and The Age last year revealed Defence officials knew the attack-class submarines would cost almost $80 billion as early as 2015 – before Naval Group was chosen – despite publicly stating at the time the estimated price tag was $50 billion.

The estimated cost has since increased to about $90 billion.

Marcus Hellyer, a senior analyst at the Australian Strategic Policy Institute, said it was still possible for the government to choose an alternative, but the Coalition government has staked its credibility on the French build.

“The further you down the path, the more money you spend – we’re getting upwards of $2 billion spent on this project already,” he said.