Cheetah cubs, Sibaya, Malkia, Tuli and Paka celebrated their big day at the world’s oldest zoo, the Tiergarten Schonbrunn Zoo in Vienna, Austria. The cubs turned one on June 22 and spent the day enjoying the warm weather in their outdoor enclosure.

Zoo director, Stephan Hering-Hagenbeck, said: “The four of them are almost as tall as their mother Afra. Sometimes you have to look twice to distinguish them from her.”

The cubs have now grown so big that they now live without their mother and eat as much food as an adult – 1.5 to 2kg of meat per day.

Head of the zoo department, Folko Balfanz, said: “Their mother no longer has to keep an eye on them all the time. The four siblings jump around and chase each other until there is dust swirling through the air.” 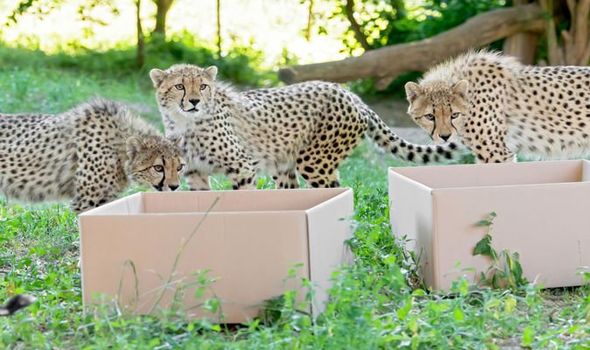 To mark their birthday, the zoo decided to carry out an experiment to see if big cats liked cardboard boxes as much as domestic cats.

Instead, the cheetahs promptly tore the boxes up.

It is estimated that there are only 7,100 cheetahs left in the wild and many scientists are calling for them to be classed as endangered.

Cheetahs are currently listed as ‘vulnerable’ by the International Union for the Conservation of Nature (IUCN) Red List of Threatened Species, but many scientists believe they should be classed as ‘endangered’. 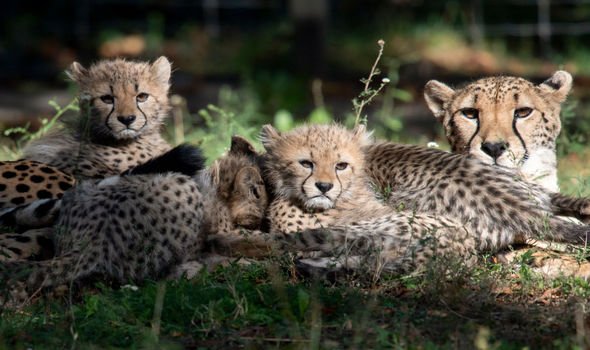 Cheetahs also have a low rate of reproductive success, meaning that as a species they are not always able to reproduce. With fewer offspring, the population can neither grow nor adapt to changes in the environment.

The cheetahs at the Vienna zoo are part of the EAZA Ex-situ Program, formerly known as the European Endangered Species Program (EEP).

In accordance with the program’s objectives, the two males, Tuli and Paka, will be transferred to other zoos when they are around one and a half years old, while their sisters Sibaya and Malkia will stay in the Vienna zoo for an undetermined period of time.