In a bid to investigate how humans can cope better with space travel, a group of aspiring astronauts are currently reenacting a moon mission inside a former nuclear bunker in northwest Poland.

Benjamin Pothier, 46, a scientist from France, who is leading the two-week experiment tells Metro.co.uk that the constant pandemic lockdowns were good training for the exercise as they are completely shut off from the outside world.

He is currently living in the ‘module’ with five others for two weeks. They are living off freeze-dried food, they do not have access to natural light and they must do an hour of mandatory exercise each day.

Pothier says, from the confines of the Lunares bunker, that the work they are doing there is ‘extremely useful if we are going make a human base on Mars and for our next moon landing, which will take place in 2024 as part of the Artemis III program’. 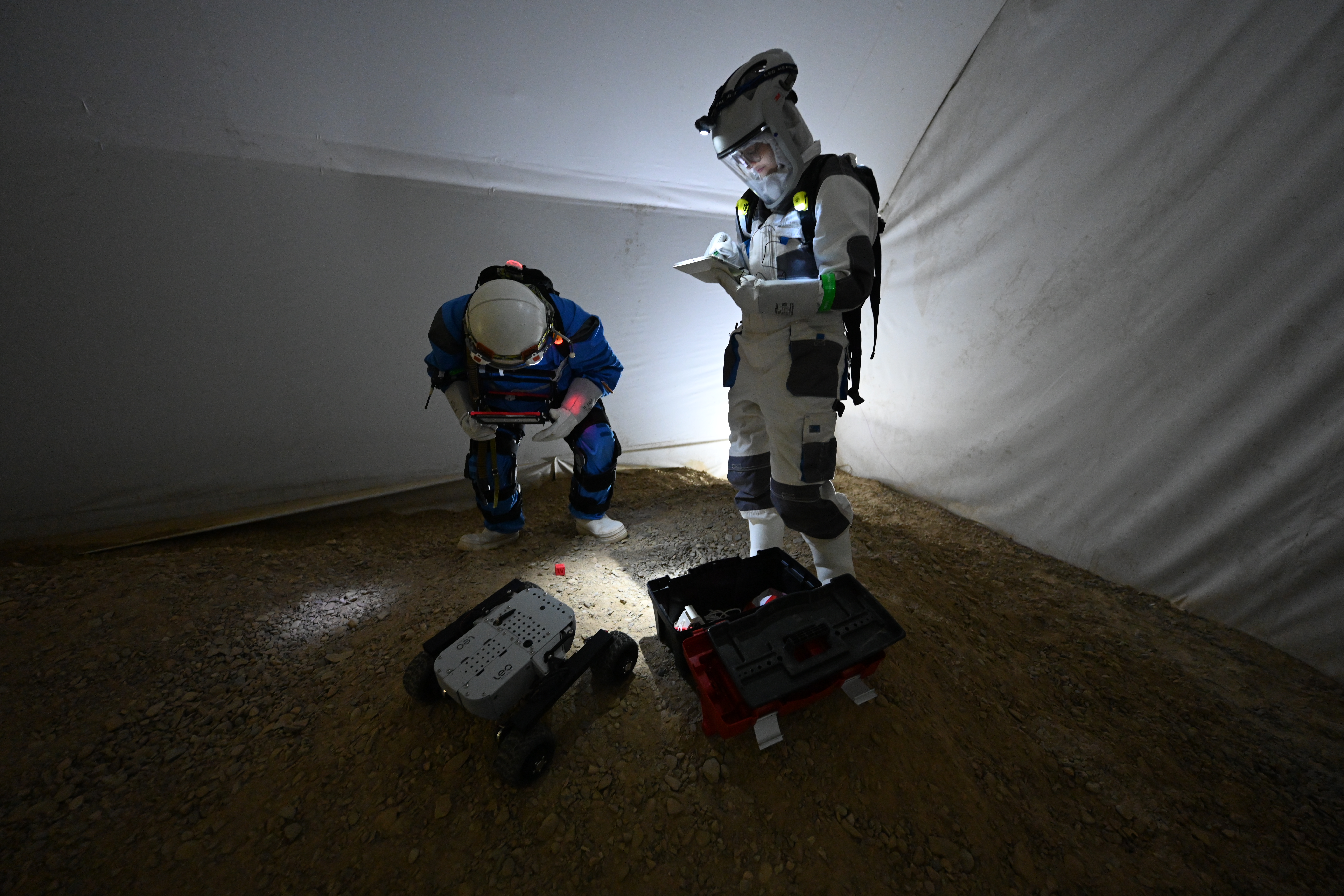 He continues: ‘It’s really important to perform these kinds of experiments here on Earth and simulate as many aspects of space missions as possible.

‘I have taken part in many of these studies, including an isolation experiment conducted by the European Space Agency at a NASA habitat in Hawaii pre-Covid-19.

‘Without doubt, these exercises are the best way to see how people cope in such environments, with limited room and human interaction, looking at the psychological and physical impacts.

‘They also provide a useful pool of data for researchers in disciplines as diverse as nutrition and food studies, psychology, human behaviour, biomechanics, neurology, etc.’

One of the main things Pothier and his team are looking at during their mission is how to reduce water waste as this is especially important if we were to make a base on Mars.

They are investigating how greywater from showers and sinks can be filtered and repurposed for things such as flushing the toilet and watering plants.

Pothier muses: ‘Living in our comfortable apartments very often we do not realize how much water we are using in our everyday life.

‘But here every cube meter of water, especially away from Earth, is precious and that changes your perspective.’

The biggest difference to a space mission is that the Lunares team are not living in zero gravity but they do spend several hours a day wearing spacesuits while they visit an adjoining hanger that is carpeted in rubble and dust simulating the surface of the moon.

The spacesuits have a rigid bottom half so that movements are restricted, similar to how they would be when walking in space.

While they are ‘on the surface of the moon’, the team test various pieces of equipment and robotics to see what future developments could be made.

So far, Pothier says, there have been no tensions within the group and they have adapted to their temporary home well.

A typical day in the bunker starts with a wakeup call at 7:30 am, a morning yoga session, a hearty bowl of freeze-dried porridge, followed by several medical checks looking at heart rate, weight and blood pressure.

‘These are then followed by conducting experiments that track our grip strength and stability to see the influence of isolation on selected motor abilities and posture,’ Pothier adds.

After they’ve had their medical tests, the team go about carrying various tasks including cleaning, ensuring the water supply is ok and preparing lunch.

In the afternoons, they conduct their ‘moon landings’ with two people at a time going for ‘moon walks’ with the resident lunar rover, Leo.

Once everyone is ‘back on board’, there’s an hour of mandatory physical training.

During real space missions, due to the weightlessness, ‘astronauts need to practice two mandatory hours of physical training to prevent muscle and bone mass loss due to the effects of gravity and it’s also good for some mental time out’.

After a productive day, the team gather together for dinner.

Pothier says the team have ‘grown to cherish this time together while eating and chatting; it gives the crew a chance to bond and to get to know one another better’.

He adds: ‘Being part of such an international crew – there are three Polish, one Mexican, Egyptian and I am French – we learn about our different cultures and perspectives which allow for very interesting and fruitful conversations.’

The current Lunares mission, titled Orpheus, is set to end on February 28.

The bunker was repurposed as a simulated lunar base in 2017 and it is the only facility of its kind in Europe.

Since its opening, dozens of simulated space missions have taken place with data collected from each expedition.

The lack of natural light is found to affect many people and a survey of U.S. space shuttle crews found that half depended on medication to go to sleep in orbit.

Other space-dwellers have reported disrupted body clocks, a condition that has been linked to various health problems and lighting aboard the International Space Station has been updated over the years to try and counteract this impact.

Pothier says the lack of natural light hasn’t bothered him although he does miss ‘waking up with the warm rays of the sun on my face’.

The space expert will be going on to participate in a Mars simulation later this year in the U.S. with the Moab desert providing a similar red rock landscape.

Participation costs €1,750 and all recruits will be tested for Covid-19 before entering the bunker.