In that most gentrified of inner-city suburbs – Surry Hills – number 12 Marlborough Street is a rare beast indeed.

The two-storey end terrace is almost totally dilapidated, sporting a motley selection of graffiti tags that add to its air of unloved ruin. 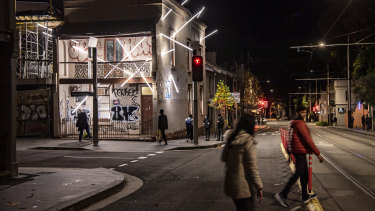 But now the passers-by taking advantage of their permitted lockdown exercise are being stopped in their tracks by a stunning “architectural intervention” from international artist Ian Strange.

Dozens of specially engineered LED rods appear to pierce the building at dramatic angles, flooding the interior with light and giving it an unworldly aura.

For the past 12 years, Strange has been making work around the world, all linked by the concept of “home”. On occasions, he has cut into houses or painted directly onto the facade as well as using dramatic lighting.

“When people come to see it they bring their own experience of ‘home’ to the work,” says Strange, who grew up in a worker’s cottage in suburban Perth. “I’ve had people tell me that the work is about domestic violence or migration, for instance. People have different interpretations. That speaks to how universal the symbol of the home is and how embedded it is in people’s subconscious.”

Called Intersections, the temporary work is part of the City of Sydney’s Art & About public art series.

Strange intends it to evoke the idea of the lines of perspective employed by artists and architects –but with a difference.

“There is no single point of perspective,” he says. “It’s twisted and distorted so, as you move around it, it creates all these multiple vantage points.”

He has enjoyed seeing how people react and delighted the central illusion has been successful.

“It’s a heritage building, so while the lines of light are designed to appear to be cutting through the walls, it has been engineered in a way that it doesn’t pierce the wall at all,” he says. “People generally think we’ve gone in there with a big drill and cut through it.”

And while it is far from ideal to be launching a new work just as the city is again forced into lockdown, Strange believes public art can help in the pandemic recovery.

“Public art is an important part of a city’s ecology,” he says. “To come out of COVID, cities need to consider how to generate interest and renewal and bring people back. Public art has a very big role to play.”