Mental health should be given the same standing as physical health if the government wants to improve the mental health of the nation, which Liberal MP and psychologist Fiona Martin says will be damaged for another five years or more.

She wants the school chaplaincy program reviewed and the number of masters programs increased to expand the psychological workforce.

Dr Martin, chair of the select committee on mental health and suicide prevention, said she’s willing to fight for recommendations in the committee’s final report, which she tabled in parliament on Wednesday. 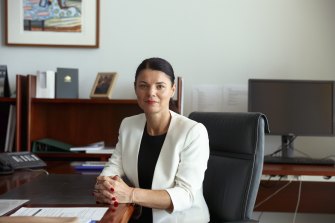 “We are very vulnerable. We’ve gone through a lot with all the natural disasters and the pandemic, and people are really struggling and they will continue to struggle, I think, for a good five years after this,” she said.

The report’s 44 recommendations include reviewing mental health training for GPs, creating a standing committee for mental health and expanding the number of masters programs for psychologists to increase the mental health workforce.

The report also wants counsellors to become registered practitioners with set requirements for training, and calls for an independent review of existing school wellbeing programs, including the school chaplaincy program.

“This is about making sure that we’re armed and ready, and we’re protecting the mental health of Australians,” she said.

The report also recommends changes in parliament, including introducing a new permanent committee for mental health and including the Deputy Chief Medical Officer for Mental Health in all crisis meetings.

It’s one of several mental health reports produced this year. A new national plan on mental health and suicide prevention is due to be made public at the end of the month, but at the end of October it was still in “solid draft” form, with $770 million in funding tied to that plan.

Mental health experts have been sceptical that the federal government is up for the task of completely overhauling the mental health system. The Productivity Commission in June last year found the system was overly complex and unfit for purpose with many people being treated too late or not at all.

Dr Martin said this select committee report gives the government a ready-made plan for change, and she’s serious about making sure that change happens.

“I have to make sure that I fight for all the recommendations in it, and I need to meet with all the ministers and be advocating for it so that we do get change, otherwise what’s the point?” she said.

“I think that I’m best to fight for these recommendations because I have that frontline experience.”

Dr Martin said she will be negotiating hard with Health Minister Greg Hunt, Assistant Minister to the Prime Minister on Mental Health and Suicide Prevention David Coleman, and Prime Minister Scott Morrison to ensure the report’s recommendations are taken seriously.

“This is a very important report about preparing us for future disasters, but also it’s about protecting the mental health of Australians and that should be important.”