The dock where Charles Darwin’s ship HMS Beagle spent its final days has been given protected status to help preserve it for the public.

The legendary 19th century vessel was most likely dismantled at a submerged mud berth on the River Roach near Paglesham in Essex, according to Historic England.

The location has been designated as a ‘scheduled monument’ by the Department for Digital, Culture, Media and Sport on the advice of the conservation charity.

Darwin made the discoveries that led to the formulation of his theory of evolution while aboard the vessel on its second ever voyage from 1831 to 1836.

Visitors to the confirmed final location of HMS Beagle will soon be able to immerse themselves in a virtual tour of the vessel’s interior. 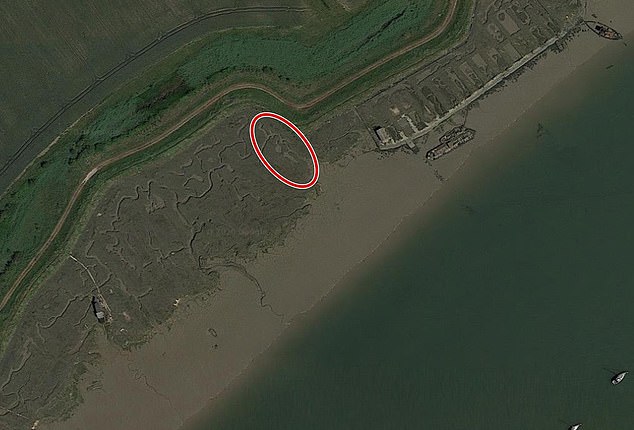 Location of the final resting place of the HMS Beagle, according to Heritage England. The circled location is on the north bank of Paglesham Reach on the River Roach, near the Eastend Wharf and Waterside Farm, River Roach, Essex

‘The voyages of HMS Beagle had a transformative impact on the world and they began here on our shores two hundred years ago,’ said Heritage Minister Nigel Huddleston.

‘As 2020 marks a special anniversary in the Beagle’s past, it is fitting that the significant site of its last days will be protected for the future.’

HMS Beagle was first launched in May 1820 from Woolwich Dockyard on the River Thames, with the purpose of accompanying larger ship HMS Adventure on a hydrographic survey of Patagonia and Tierra del Fuego in South America. 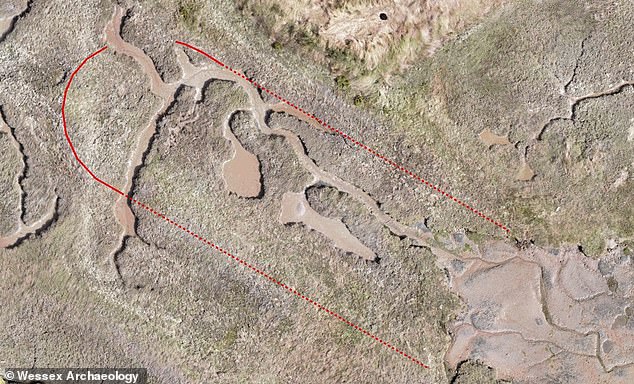 Multispectral UAV survey involved flying a UAV (drone) fitted with a specialist camera, which captures red, green, infrared, near-infrared light, to create a Neutral Density Vegetation Index (NDVI). This has created a clear outline within the dataset of the original mud dock where HMS Beagle was most likely dismantled, confirming its location

But the ship is best known for its second voyage, which carried carrying 22-year-old Darwin across the Atlantic, around the the southern tip of South America and via Tahiti and Australia, under the command of Captain Robert Fitzroy.

Based on fossils of extinct species and observations of living plants and animals, Darwin developed his theory of natural selection, later detailed in his seminal 1859 work, On the Origin of the Species.

Following three far-flung exploratory voyages, the Beagle was refitted as a static watch vessel for the Essex Coastguard in 1845 to curb smuggling, until it was sold for scrap in 1870 and eventually demolished, likely by whoever bought it. 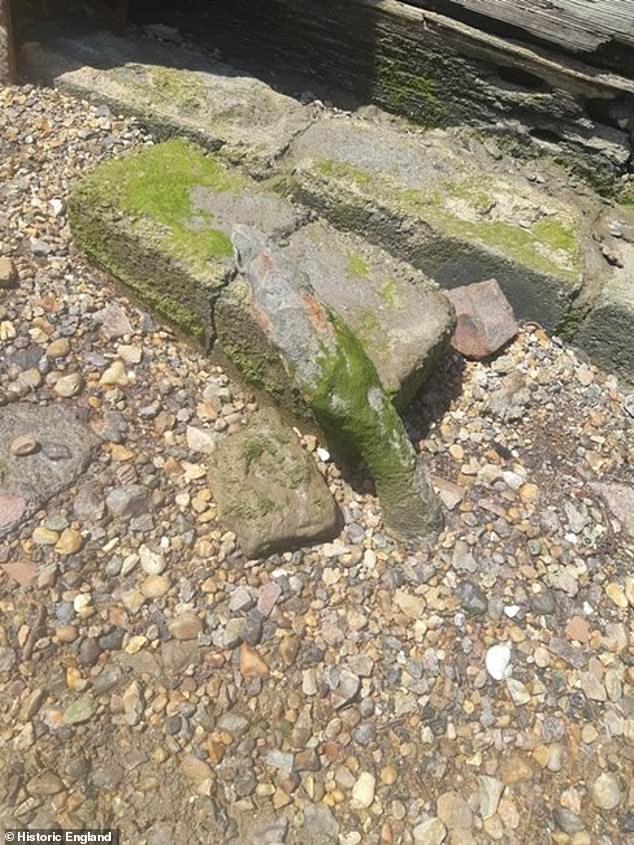 The remains of an anchor on the shore indicate that ship remains are to be found in the area, though this is not the Beagle’s anchor, which has already been found in the past

Before the ship’s destruction, she had been moored in the River Roach, which is part of a network of waterways and marshes known as The River Crouch and River Roach Tidal River System.

But the exact location of the vessel’s undistinguished demise had been undetermined until dedicated research of the area that kicked off at the turn of the century.

Previous surveys undertaken by a team led by the late Dr Robert Prescott from the University of St Andrews in 2003, and more recent work by the University of Southampton, showed that there are the remains of material in Rochford mud dock. 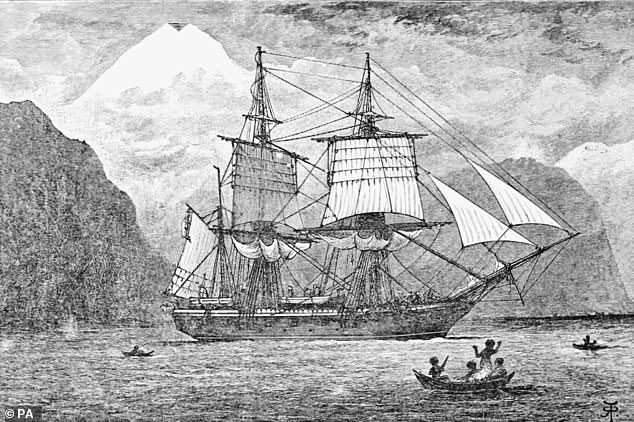 HMS Beagle in the Straits of Magellan – Reproduction of frontispiece from Charles Darwin (1890), ‘Journal of researches into the natural history and geology of the various countries visited by H.M.S. Beagle 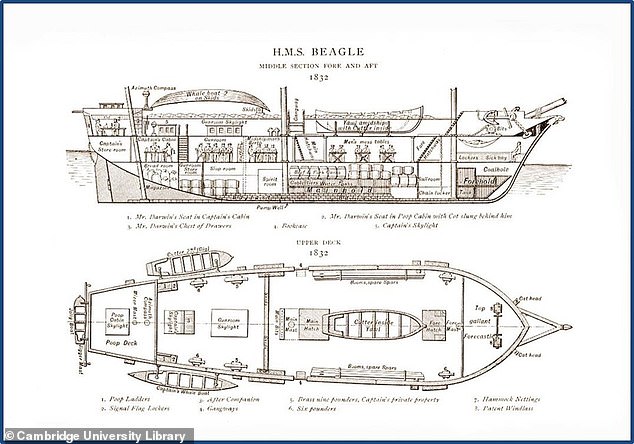 Blueprint of HMS Beagle in 1832. Visitors will be able to immerse themselves in a CGI tour of the HMS Beagle by holding their smartphones or tablets up to the horizon

The Rochford mud dock – a specifically cut mooring place in which a vessel rests on the bottom at low tide – was constructed sometime after 1847.

Despite what was probably once a common feature on England’s major waterways, particularly in the absence of designed dockyards, the locations of purpose-built mud docks are not well known and only five are recorded in England, Historic England said.

A mud dock of the same type can be seen in John Constable’s 1815 painting Boat-Building Near Flatford Mill on display at the Victoria & Albert Museum, London.

Mud berths included the need for shoring to stabilise the sides, and wooden stocks to support the ship.

The sloped brick hard extended alongside the dock and ship’s side, allowing people access down the foreshore to low water.

In 2019, Historic England commissioned Wessex Archaeology to investigate the Paglesham mudflats in Rochford, thought to be the last resting place of the Beagle, ahead of the bicentenary of the vessel’s launch in May 2020 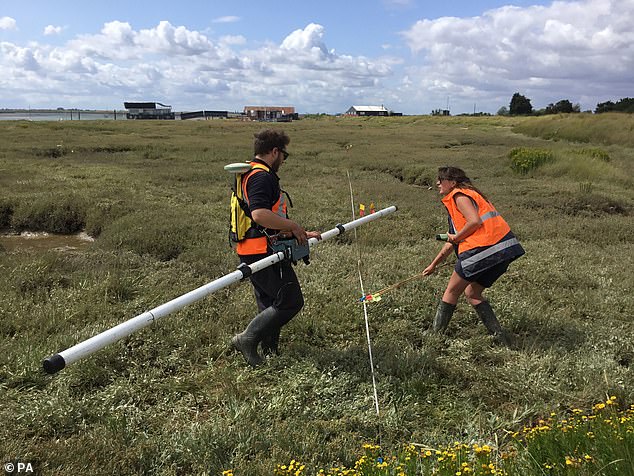 Archaeologists at the site in Essex, who used  geophysical surveys and an aerial survey by drone

Maritime archaeologists confirmed the location of the mud dock and a brick slope or ‘hard’ using geophysical surveys and an aerial survey by drone.

Its outline, location and size matches the indentation of the riverbank recorded on early Ordnance Survey maps.

​Rochford District Council now plans to build an observation platform at the RSPB Wallasea Island Wild Coast Project, overlooking the River Roach where the ship was moored, to commemorate it. 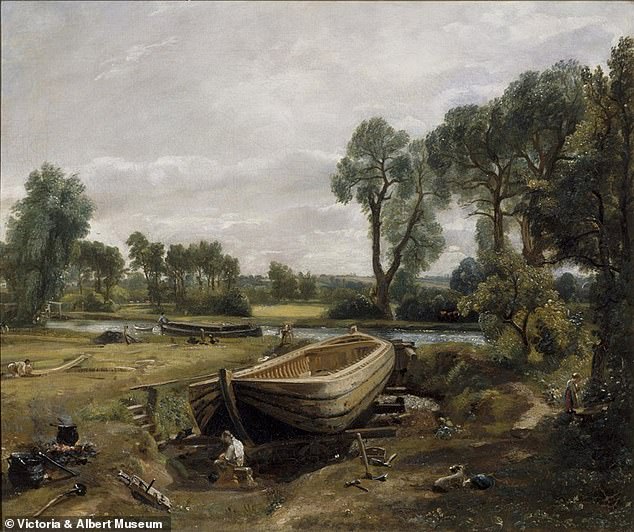 Visitors to the site will be able to immerse themselves in a CGI tour of the HMS Beagle on their smartphone, by holding their device to the horizon.

The site will be benefiting from a scheduled monument classification – Historic England’s oldest form of heritage protection, giving it protection against unauthorised change.

Once a monument is scheduled, any works to it, with few exceptions, require scheduled monument consent from the Secretary of State.

‘This is a fascinating example of a rare piece of maritime history, linked to one of the world’s most famous ships,’ said Duncan Wilson, Historic England chief executive.

‘We are glad to see this site in a quiet corner of Essex given national protection.’

HISTORY OF THE HMS BEAGLE

1821: The Beagle participates in celebrations of the coronation of King George IV

1826-30: Voyage of exploration to survey the coasts of Patagonia and Tierra del Fuego

1831-36: Charles Darwin joins the voyage of exploration on the Beagle to survey the coast of Tierra del Fuego

1837-43: Voyage of exploration to survey the coast of Australia

1845: The Beagle is transferred to the Customs Service to control smuggling on the Essex Coast. It is refitted as a static coastguard watch vessel – its masts are removed and it is renamed CGWV No. 7

1851: Purpose-built mud dock constructed as the Customs Service is asked to remove the ship as it is obstructing the river and its coastal oyster-beds, home to the cultivation and harvesting of the European flat oyster