Scott and Jenny Morrison’s decision to sit down for a much-anticipated interview with 60 Minutes says a lot about the Prime Minister’s current political standing – and not much of it is good.

Morrison has had a dreadful start to 2022 with hundreds of people dying during the Omicron COVID-19 wave, hundreds of thousands of people catching the virus, millions of people going into a quasi-lockdown and rapid antigen tests nearly impossible to find for a time.

Coupled to that have been the leaked free-ranging character of assessments of Morrison from Barnaby Joyce (“hypocrite and a liar”), Gladys Berejiklian (“horrible”, allegedly), an unnamed minister (“complete psycho”), the defeat of the religious freedom bill (which angered party moderates and conservatives), the apparent dumping of a federal ICAC and a precipitous fall in the polls.

So while planning for the interview with Nine (also the publisher of this masthead) began late last year – hardly a rush job – the interview arrives at an apposite moment.

The decision to grant more interviews in 2022 is one part of the Prime Minister’s office’s plan to rehabilitate his standing. 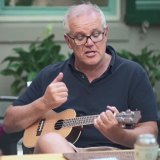 Scott Morrison during a 60 Minutes interview intended to soften his image.Credit:

Another part of the plan was on full display this past week in Parliament: just as Labor has spent years questioning Morrison’s character and judgment, so too now has the government clearly decided to break out the knuckle dusters and go after Anthony Albanese.

In one week, Morrison declared Albanese a “sook and a snarler” who lacked the qualities to lead the country.

Treasurer Josh Frydenberg listed all the taxes Albanese had supported over the years including the carbon, congestion and mining taxes and more besides.

He even exhumed a claim (lapped up by a rival newspaper) the Opposition Leader had backed death taxes. Thirty years ago, mind you.

Finance Minister Simon Birmingham released figures that suggested Labor would have spent an extra $81 billion in responding to the COVID-19 pandemic – remembering, of course, the Parliamentary Budget Office has estimated the government spent about $38 billion on JobKeeper payments to employers that did not suffer sustained downturns. 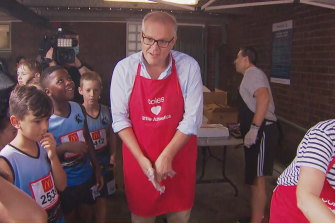 Morrison’s media minders will be hoping the interview begins to smooth his sharp edges and flaws – which have been on full display.

Defence Minister Peter Dutton first whacked the Opposition Leader for never having held an economic portfolio and then tendentiously claimed Labor pretended “there’s no difference between the two parties when it comes to defending our nation” but that Albanese was the least prepared Labor leader on national security since Mark Latham.

Just to round it all out, a Sydney tabloid even went after Albanese because a friend of his claimed in an interview that only upper-class Australians (like Morrison, presumably) purchased white bread – thereby, somehow, proving the Opposition Leader was out of touch.

And it’s only mid-February. 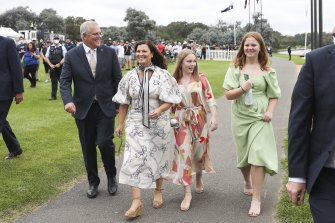 It looked for all the world like a “kitchen sink” strategy to throw everything at Albanese to see what might stick – and a calculated response as the Prime Minister’s standing and character has declined (according to published polls) over a sustained period of time.

The free-ranging assessments of Albanese are also an attempt to define the small-target Opposition Leader in the minds of voters.

In appearing alongside his wife, Morrison’s media minders will be hoping this is the interview that begins to smooth the Prime Minister’s sharp edges and flaws – which have been on full display over the past few months – and humanise him ahead of a budget in March that will springboard into a poll expected in May.

There will be some people who will look again at the Prime Minister as a result of the 60 Minutes interview and the insights provided by Mrs Morrison (who is likely to play a more prominent role in the coming campaign than she did in 2019).

Interviews like these rarely change as many minds as the subject hopes and this is one is unlikely to be an exception. Morrison has been in the job for more than three years, has lead in his saddlebags and won’t be able to re-run his insurgent 2019 campaign.

The calculation is that combined with the full-frontal assault on the Labor leader’s character and fitness for high political office, a two-track strategy softening Morrison and tarnishing Albanese – going low and high at the same time – will cut through.

Above all else, it underscores how narrow the government’s path to a fourth term has become.