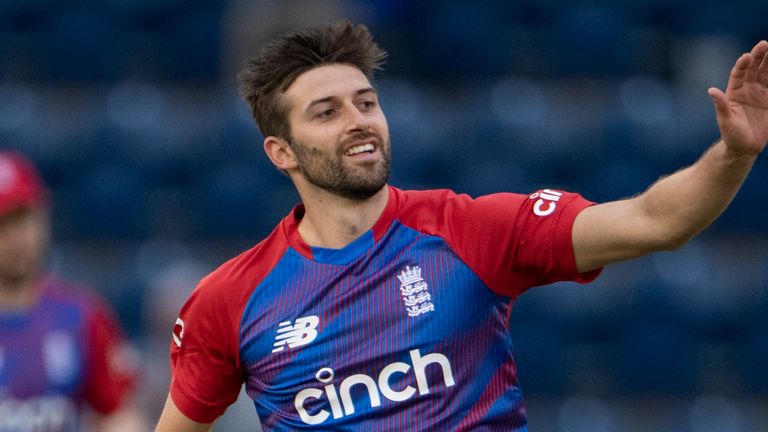 England clinched a series win over Sri Lanka, despite suffering a slight scare in chasing 112, to win the second T20 international by five wickets on Thursday in Cardiff.

After restricting Sri Lanka to a score of just 111-7 when batting first, England then stumbled their way to 36-4 in the seventh over of their reply.

Jonny Bairstow – promoted up to open for the rested Jos Buttler – was bowled third ball, Dawid Malan (4) again fell cheaply, while Eoin Morgan (11) and Jason Roy (17) failed to kick on after getting starts.

Sam Curran seals it with a six and England clinch the series with a game to spare! Livingstone ends 29no #ENGvSL🏴󠁧󠁢󠁥󠁮󠁧󠁿🇱🇰

Rain disrupted England’s chase at the 12-over mark, the hosts having recovered to 69-4. When play resumed, England reached their revised target of 103 (18 overs) with 11 balls to spare, Liam Livingstone top-scoring with an unbeaten 29.

Earlier, Sri Lanka again opted to bat first after winning the toss, but showed a startling lack of intent in their innings, as they scored just 26 runs for the loss of two wickets in the six-over powerplay and their first boundary took a whole 46 deliveries to arrive.

In fact, Sri Lanka managed to find the rope on only four occasions in their entire innings, clearing it twice, and those were shared between just two batsmen, Kusal Mendis (39) and tailender Isuru Udana (19no). 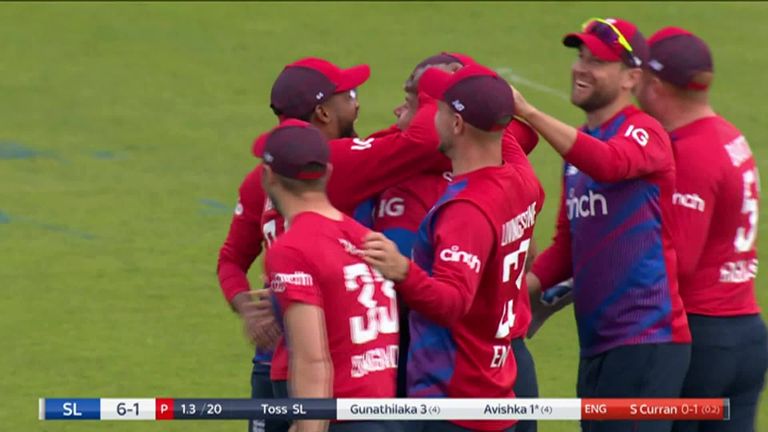 England’s first wicket of a hugely disciplined bowling display arrived via the boot of Sam Curran, as some quick reactions and fancy footwork saw him run out Danushka Gunathilaka (3) in the second over. Curran then accounted for Avishka Fernando (6) – out on the hook – in his next.

Kusal Perera and Mendis rebuilt, slowly, with a 50-run partnership, but just as the latter was beginning to fire, swivel-pulling Chris Jordan for a big six over long leg, Perera (19) departed and the innings fell apart thereafter.

The Sri Lankan captain, a ball after being dropped by Malan – a tough chance in the deep – attempted to reverse sweep Adil Rashid (2-24) but could only pick out Morgan at cover. 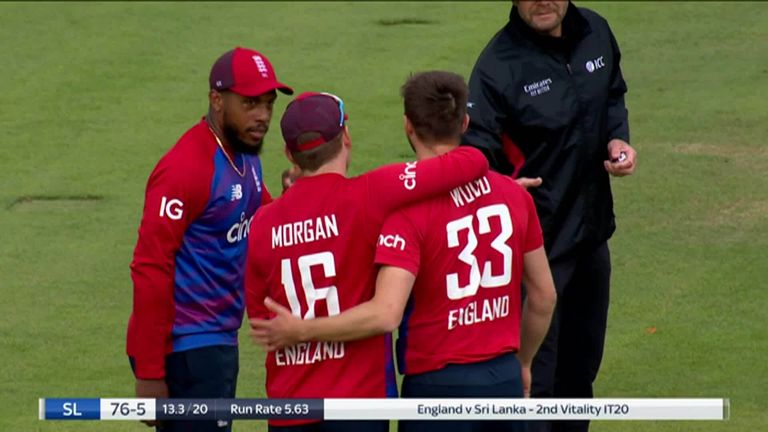 Mark Wood (2-18) found himself on a hat-trick in the 14th over when Mendis skied an attempted pull behind to Bairstow and then Niroshan Dickwella (3) plinked one straight to mid-off.

Wanindu Hasaranga (3) just about survived the hat-trick delivery, despite a little waft outside his off stump, but he was quickly gone in the next over, stumped by Bairstow when charging Rashid.

Dasun Shanaka (8) – scorer of 50 in the first T20I – couldn’t repeat his heroics from Wednesday night, but Udana did at least flash in the final over, smashing 14 from it to see Sri Lanka up above the 100-mark. 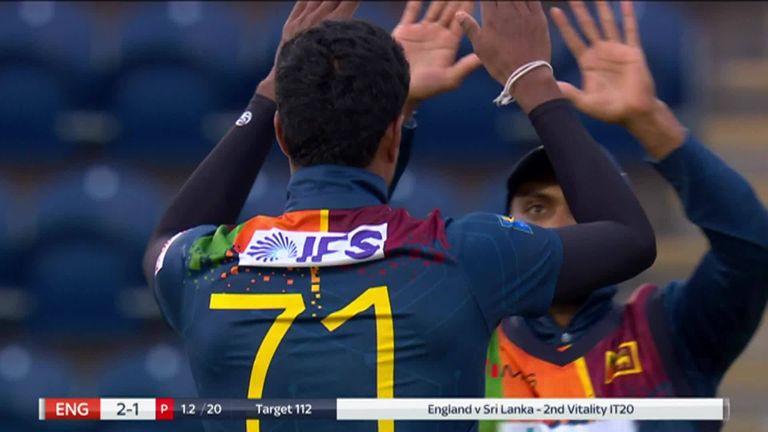 Sri Lanka showed far more fight with the ball, as left-armer Binura Fernando (1-17) first cleaned up Bairstow in the second over and right-arm quick Dushmantha Chameera (1-29) pinned Malan lbw in the next – initially given not out but overturned on review.

Morgan and Roy briefly rallied, before the England skipper slapped Udana (1-25) straight to the fielder at backward point and Roy picked out long-on off legspinner Hasaranga (2-20).

Liam Livingstone and Sam Billings (24) recovered the innings either side of the rain break, and though the latter was bowled by Hasaranga in the 15th over, Curran (16no) came in and saw England home to a series win, clinched with a smashed six straight down the ground.

Watch the third and final T20 International between England and Sri Lanka, live on Sky Sports Cricket from 2pm on Saturday.