In the second book of the Bible, the 10 Plagues of Egypt describes disasters inflicted by God to force the Pharaoh to allow the Israelites to depart from slavery to the Promised Land. They serve as the “signs and marvels” given by God to answer the taunts and show “the Egyptians shall know that I am the Lord”. The 10 plagues include turning water to blood, a plague of frogs in the Nile, a plague of lice, wild animals of flies that harm people, the pestilence of livestock, a plague of boils, thunderstorms of hail and fire, a plague of locusts, darkness for three days and death of firstborns.

According to biblical interpretations, the story is physical, spiritual and prophetic to what will happen again during the End Times, before the Second Coming of Jesus Christ.

Writing for Technical Politics, he claimed: “So far in 2020, it has just been one thing after another, and many are speculating about what could be ahead if events continue to escalate.”

And some seem to agree with him, sharing their thoughts on Twitter. 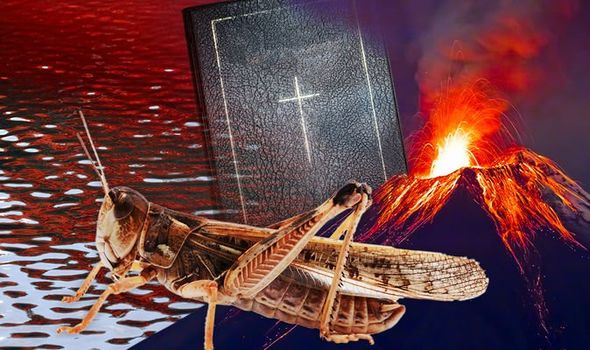 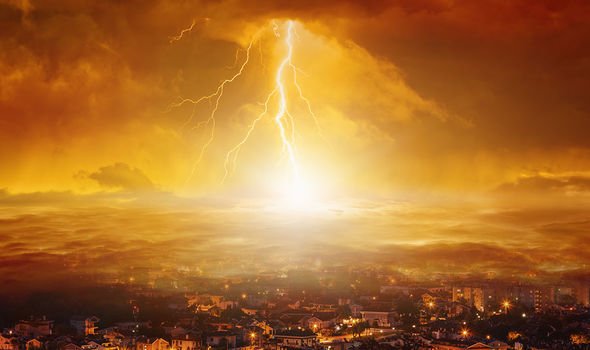 One wrote: “Feel like I’m living in Exodus before the Pharaoh finally agrees to let the Israelites go.”

Another added: “What is happening now was warned in the Bible.”

And a third claimed: “Someone check Exodus for me and figure out what Moses is going to do next.”

But, there is an explanation for the plagues and physical evidence of their presence on Earth.

To unleash the first plague upon the Egyptians, Moses struck the River Nile with his staff, turning its waters to blood.

The text reads: “The fish in the Nile died, and the Nile stank, so that the Egyptians could not drink water.” 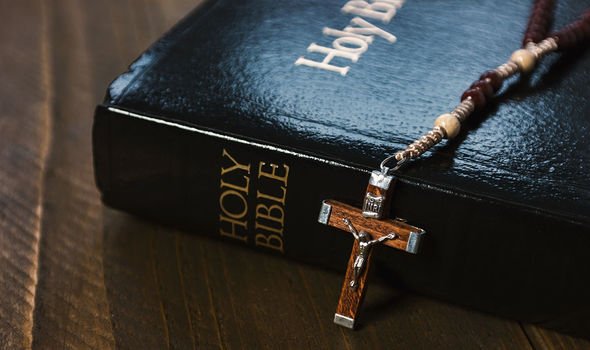 The sudden appearance of red-hued waters in the Nile has been reported for centuries since and is believed to be caused by a red algae bloom.

This phenomenon is known as “red tide” when it happens in oceans, but red algae are also well-represented in freshwater ecosystems.

For the second plague, Moses allegedly conjured vast quantities of frogs that swarmed into people’s homes – even finding their way into the Egyptians’ beds, ovens and cookware.

The phenomenon of “raining frogs” has been seen multiple times throughout history, most recently in May 2010 in Greece, where thousands of frogs emerged from a lake in the northern part of the country, likely in search of food, and disrupted traffic for days.

The third plague, lice, may have been caused by the toxic algal bloom and presence of dead frogs, according to scientists. 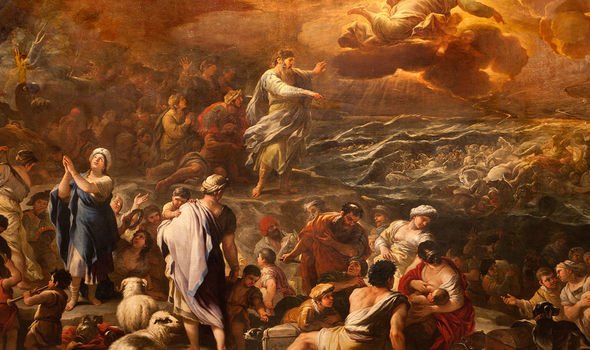 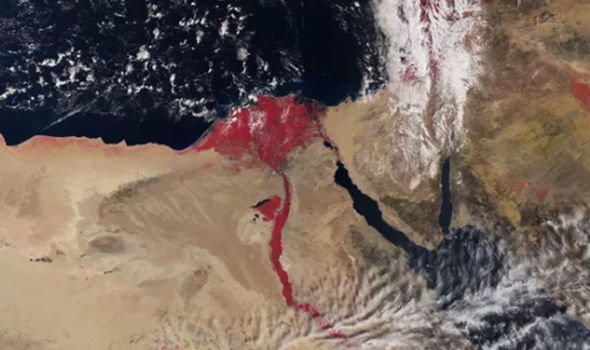 Lice and fleas can transmit the bacteria Yersinia pestis, which causes bubonic plague that is currently sweeping across China.

Most commonly, people interpret the fourth plague to mean wild animals such as venomous snakes or scorpions, or even lions or bears.

However, according to academics J.S. Marr and C.D. Malloy, the fourth plague represents a swarm of flies, similar to those that caused havoc in Lough Neagh, Northern Ireland, last week.

The fifth plague called down on Egypt was a mysterious and highly contagious disease that swiftly killed off the Egyptians’ livestock.

This biblical scourge is reminiscent of a real plague known as rinderpest, an infectious and lethal viral disease that decimated populations of cattle and other ruminants across Africa and Europe from the 18th through to the late 19th centuries.

Shortly after the Egyptians’ livestock died off, they were distracted by the sixth plague — an extremely uncomfortable plague of boils that covered their bodies. 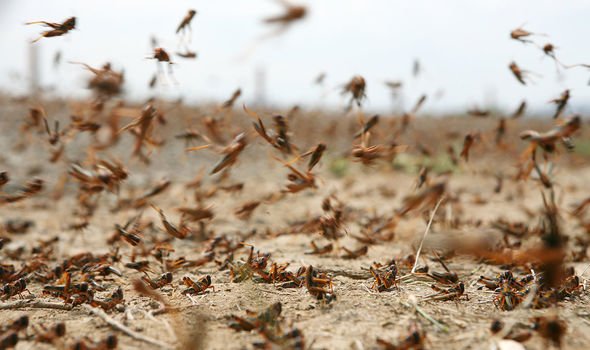 An outbreak of the highly infectious disease smallpox, which caused distinctive raised blisters, could result in a large number of people simultaneously coming down with rashes and welts.

The last outbreak of smallpox in the world reportedly occurred in the UK in 1978.

The seventh plague brought a heavy hail accompanied by thunder and streaming fire.

The chaotic weather struck down people, livestock and trees, although the area of Goshen, where the Israelites lived, was spared.

It is thought to have occurred due to a nearby volcanic eruption about 3,500 years ago on Santorini.

This week, Indonesia’s Sinabung volcano burst into life, unleashing an avalanche of scorching clouds down its slope. 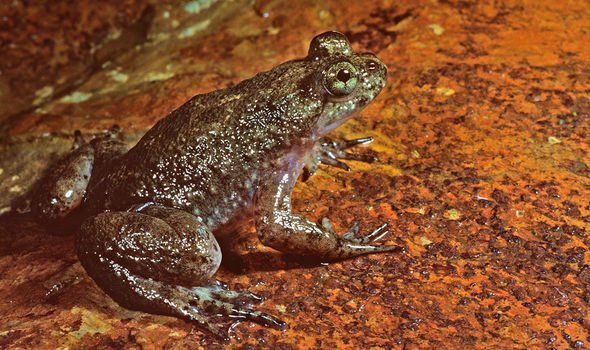 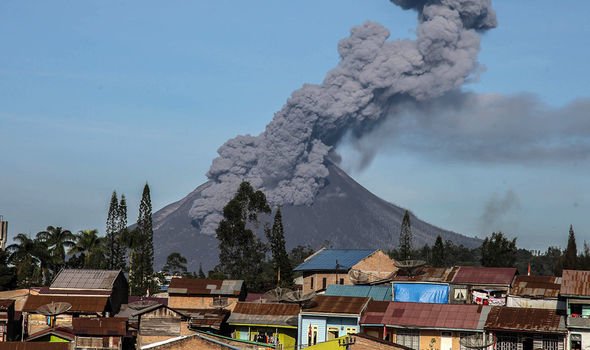 When the Pharaoh once again refuses to let the Jewish people go, hungry locusts descend as the eighth plague.

Moses warns the Pharaoh: “They shall cover the surface of the land, so that no one will be able to see the land.

“Such a pestilence would devour all the remaining plants that the hail did not destroy.”

This year East Africa has seen the worst swarm of locusts in a century, causing devastating environmental and health problems and experts fear they could get worse.

The plague of darkness – Moses’ ninth disaster – may have been a solar eclipse or a cloud of volcanic ash, scholars say.

According to the Old Testament, a darkness so thick that “people could not see one another” descended on Egypt for three days,” but the “Israelites enjoyed light in their dwellings”.

Perhaps the darkness coincided with an eclipse on March 5, 1223BC. Eclipses have continued between two and five times every year since.

In the tenth and last plague, Moses tells the Pharaoh that all the firstborns in the land of Egypt will perish.

Scientists argue that the algal bloom that turns the rivers blood red releases mycotoxins, poisonous substances that can cause disease and death in humans, according to a 2003 review in the journal Clinical Microbiology Reviews.

The firstborn might have been the first to pick the grain and would have fallen victim to it first as well.