Princess Diana’s brother Earl Spencer said he had a ‘good day’ unveiling his sister’s statue alongside close family including his nephews Prince William and Prince Harry.

Charles, Earl Spencer, 57, took to Twitter yesterday evening to share two photos of the private event at the Sunken Garden, Kensington Palace, along with the simple caption: ‘Today, in Kensington. A good day.’

Earl Spencer and Diana’s sisters Lady Jane Fellowes and Lady Sarah McCorquodale were among a handful of guests invited to the unveiling of the Diana statue, on what would have been the princess’s 60th birthday.

The statue’s design was top secret and appears to be inspired by Diana’s official 1993 Christmas card – her first sent without Prince Charles – where she wears the same open ribbed shirt, skirt and belt as she smiles lovingly at her two sons. 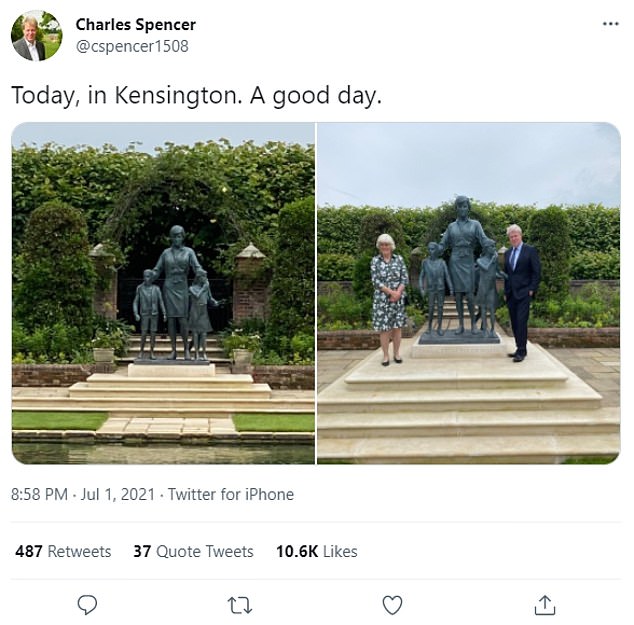 Charles Spencer took to Twitter yesterday to share two photos of the event at the Sunken Garden, Kensington Palace, along with the simple caption: ‘Today, in Kensington. A good day’ 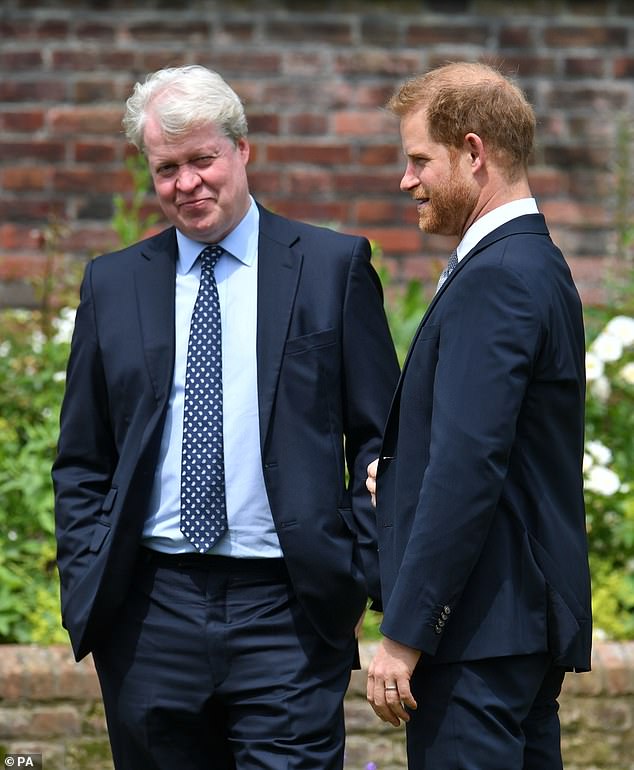 Earl Spencer and Diana’s sisters Lady Jane Fellowes and Lady Sarah McCorquodale were among a handful of guests invited to the unveiling of the Diana statue, on what would have been the princess’s 60th birthday. Pictured, Charles Spencer with Prince Harry 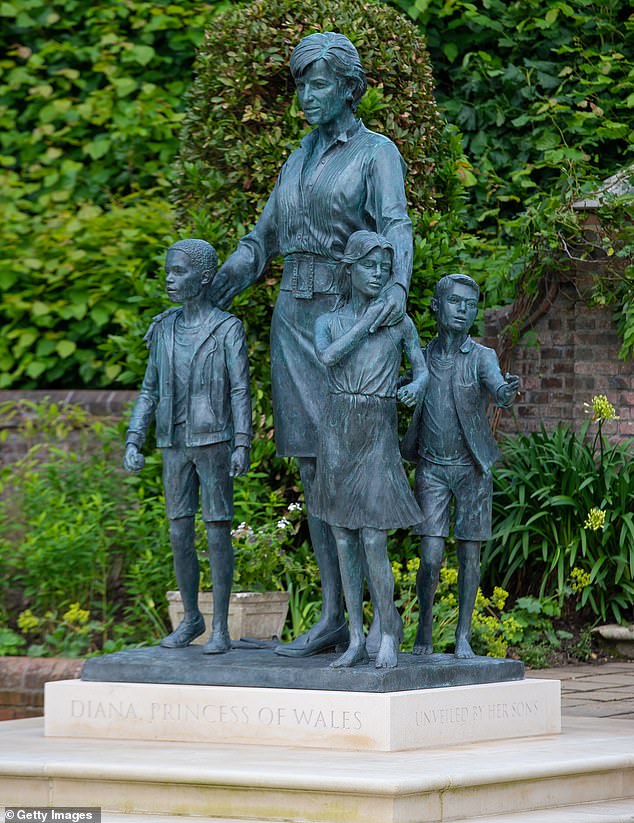 The statue of Diana, Princess of Wales, by artist Ian Rank-Broadley, in the Sunken Garden at Kensington Palace. The bronze statue depicts the princess surrounded by three children to represent the ‘universality and generational impact’ of her work. Her short cropped hair, style of dress and portrait are based on the final period of her life. Beneath the statue is a plinth engraved with her name and the date of the unveiling, and in front is a paving stone engraved with an extract inspired by The Measure of A Man poem on July 1, 2021 in London, England. Today would have been the 60th birthday of Princess Diana, who died in 1997. At a ceremony here today, her sons Prince William, Duke of Cambridge and Prince Harry, Duke of Sussex unveiled a statue in her memory

Charles shared a photo of the statue, which appears to have been taken on a camera phone, and a second snap of him and Lady Jane on either side of the likeness of their sister.

Although the public and media were excluded, crowds gathered in Kensington Gardens, where the late princess liked to jog and even roller-skate, keen to feel part of the day.

Much to the surprise of the crowd, Diana’s siblings quietly walked in front of the palace, apparently searching for the way in.

They glanced at the well-wishers before their presence started to cause a stir – and police officers ushered them in.

William and Harry gave their aunts and uncle a warm welcome at the event, which lasted just 90 minutes.

The princes greeted their aunts with a kiss on the cheek. Lady Sarah beamed as she held onto Harry’s shoulder and appeared to whisper something into his ear. 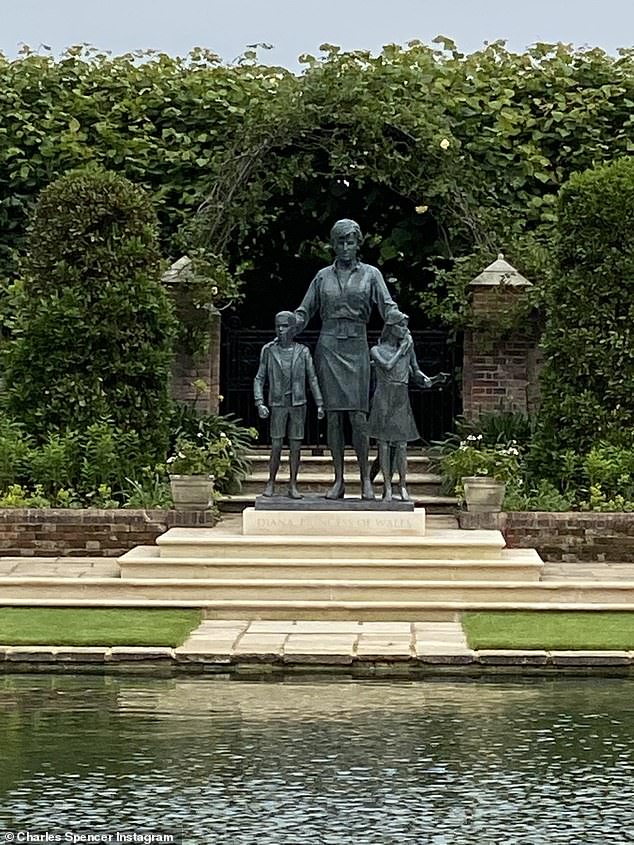 The statue’s design was top secret and appears to be inspired by Diana’s official 1993 Christmas card – her first sent without Prince Charles – where she wears the same open ribbed shirt, skirt and belt as she smiles lovingly at her two sons. Pictured, the photo shared by Earl Spencer 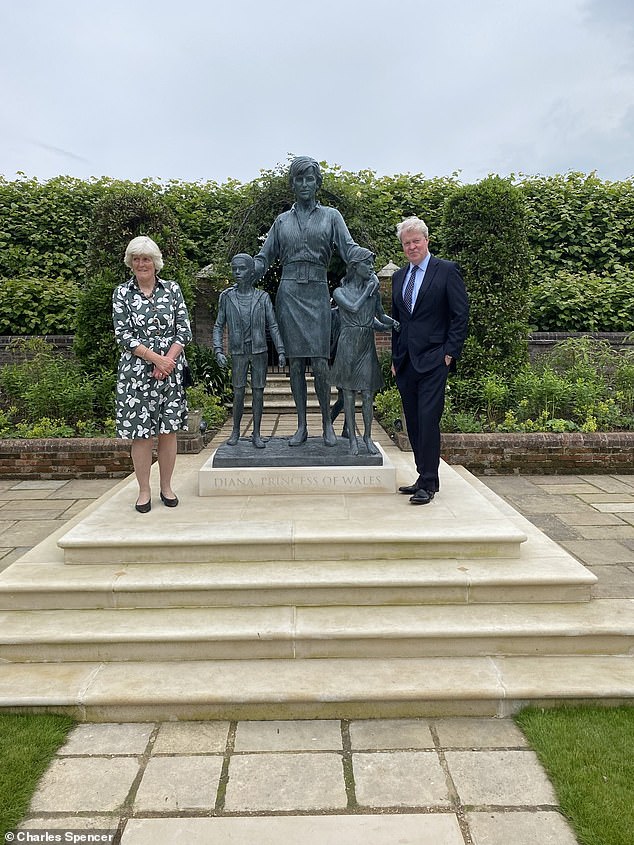 Later Prince Harry, who appeared excited throughout the event, smiled widely as he shared a light-hearted moment with his aunts and uncle Charles.

Prince Charles was not present at the ceremony, which was changed to a ‘private event’ instead of the large celebration to mark Diana’s life as originally intended.

The move to scale back the unveiling was largely due to bad blood between the brothers and Harry’s determination to control media coverage – and was only broadcast after it was over and the Duke of Sussex was leaving.

Lady Sarah, Lady Jane and Charles, Earl Spencer, have all remained close to their nephews since Princess Diana’s death.

Charles and his wife Karen sat front row at Prince William’s 2011 wedding to Kate Middleton, with his three daughters and one son in the row just behind. In pride of place next to the Middleton family too was Lady Sarah and Lady Jane, while Lady Anne Wake-Walker, Diana’s aunt also had a place in the pew. Harry was also seen chatting to his uncle before the ceremony. 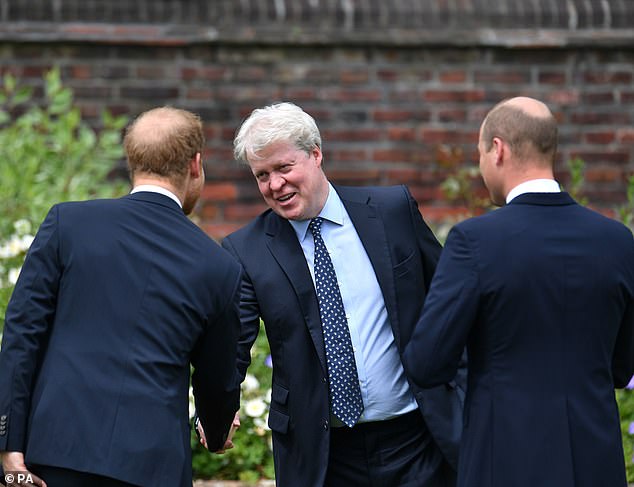 Harry also spoke to Earl Spencer, his mother’s brother, at the Spencer-dominated event, shaking his hand

The Duke of Sussex (centre) with his aunt Lady Jane Fellowes and uncle Earl Spencer, making them laugh 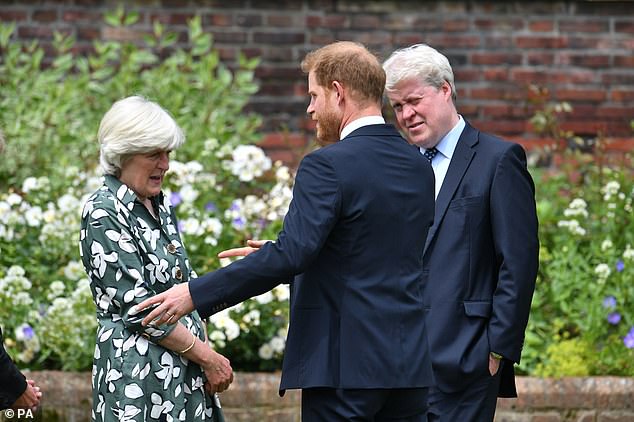 Family time: Prince Harry chats to his aunt Lady Jane Fellowes and uncle Earl Spencer at the unveiling of the statue today 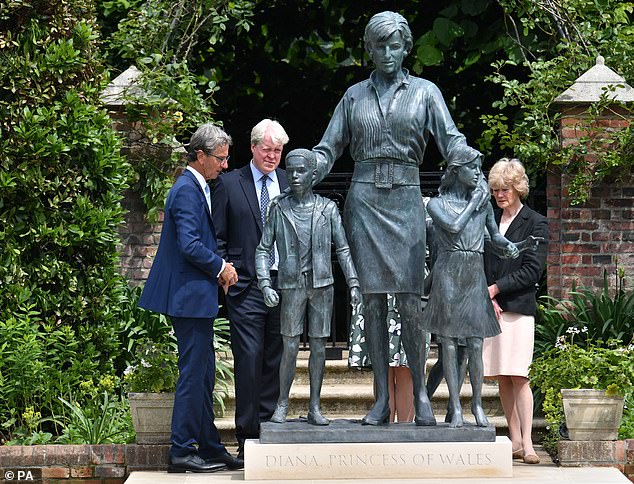 Admiring: Sculptor Ian Rank-Broadley, Earl Spencer and Lady Sarah McCorquodale after the unveiling of the statue

The Spencers siblings, their spouses and children were also in attendance at Harry’s wedding to Meghan in 2018.

In 2019, the Sussexes shared a photo of Archie’s christening, which showed the Duke and Duchess with their son and Lady Jane and Lady Sarah alongside the Duchess of Cornwall, The Prince of Wales, Doria Ragland, The Duke of Cambridge and The Duchess of Cambridge in the Green Drawing Room at Windsor Castle.

They didn’t attend the christenings of the Cambridge children, however neither did Charles’ siblings as it was just grandparents and godparents in attendance.

Lady Sarah was on the statue committee and was tasked in 2017 with commissioning and privately raising funds for the creation of the statue. 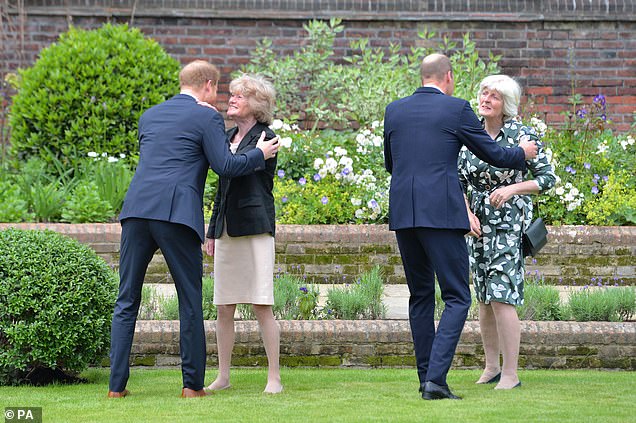 Precious moments: The aunts, Princess Diana’s older sisters, looked delighted to see their nephews at the intimate event. The statue was unveiled in the Sunken Garden – one of Diana’s favourite spots – on what would have been her 60th birthday 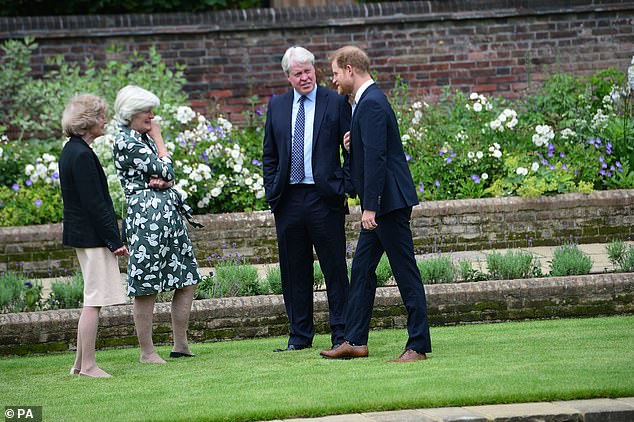 Lovely to see you! Prince Harry shared a light-hearted moment with his uncle and aunts during the short event this afternoon 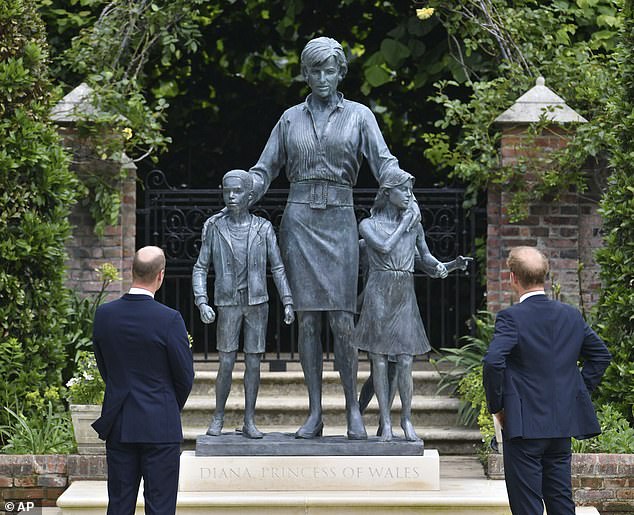 The Duke of Cambridge (left) and Duke of Sussex look at a statue they commissioned of their mother Diana, Princess of Wales

Her five colleagues included Diana’s close friend, Julia Samuel, who is a godparent of Prince George, and John Barnes, chief executive of Historic Royal Palaces, the charity which looks after a number of royal sites.

The committee was chaired by Jamie Lowther-Pinkerton, William and Harry’s former principal private secretary, and it also included Gerry Farrell, director of the Sladmore Gallery, which specialises in sculpture, as well as financier Guy Monson, a former trustee of the royal brothers’ charitable foundation.