Storytime with Camilla! Duchess of Cornwall reads The Tiger Who Came To Tea to a group of children as she opens a library at a London primary school

The Duchess of Cornwall showed off her love of reading again today, joining London primary school pupils to open a new library in the capital.

Camilla, 72, headed to Nine Elms to open the Life Changing Library at Griffin Primary School in South London before heading for a picnic lunch in St James Park with the excited pupils to launch their Story Trail.

The Royal, who has her own Instagram reading group and is a patron of BookTrust and the National Literacy Trust, looked relaxed in a navy blue shirt dress adorned with a feather design, as she made the morning visit. 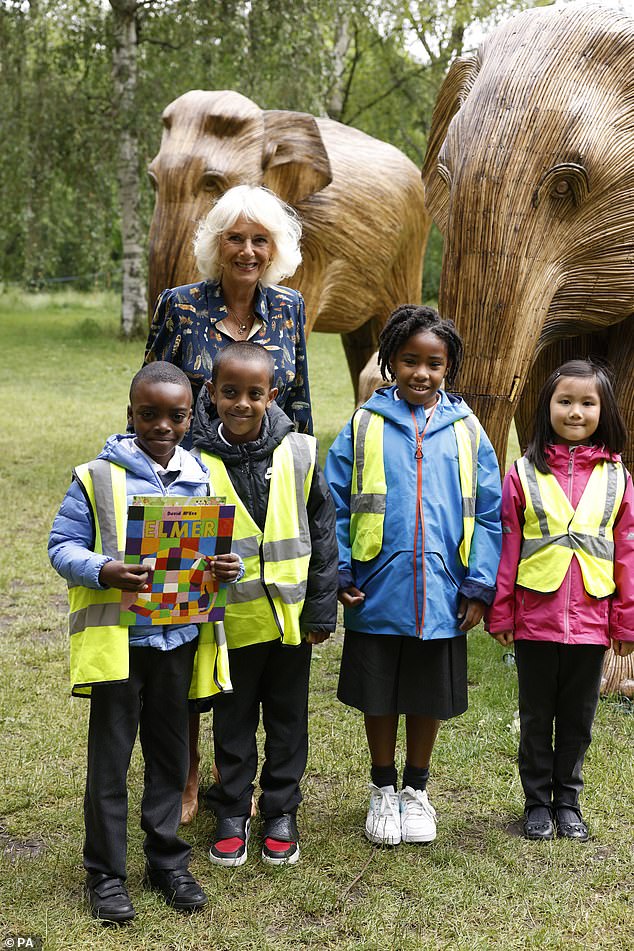 A right royal lesson! The Duchess of Cornwall, 72, looked relaxed as she took part in a literary picnic in St James Park with the pupils of Griffin Primary School in Nine Elms 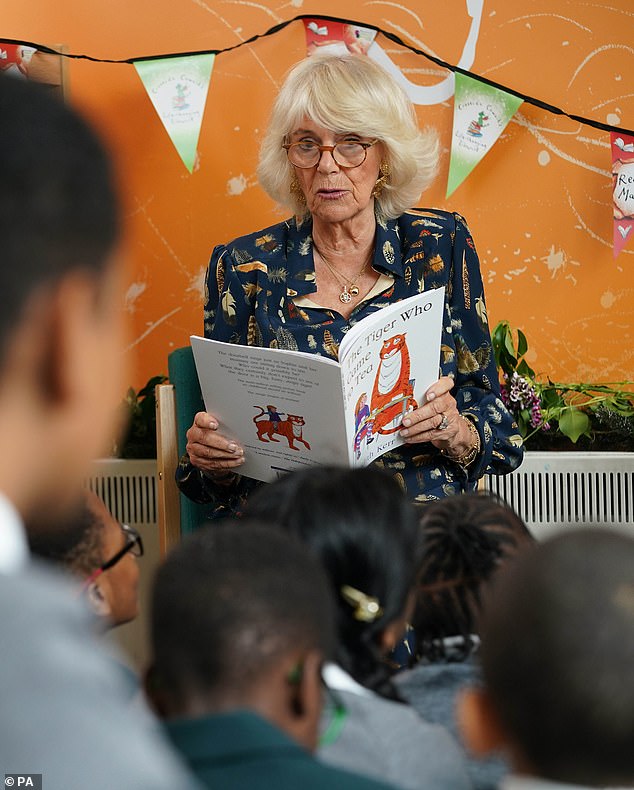 With her reading glasses firmly on, Camilla delighted the pupils with a reading of Judith Kerr’s The Tiger Who Came to Tea

Excited children gathered round in the school’s new Life Changing Library, a nationwide project from best-selling author Cressida Cowell, as the Duchess read to them.

Armed with her tortoiseshell reading glasses, Camilla delighted her captivated audience with a special reading of The Tiger Who Came to Tea, by Judith Kerr.

Camilla was joined by Waterstones Children’s Laureate Cowell, who also took time to read to the children during her visit to the South London school.

Cowell, wearing a canary yellow belted dress, put on an animated display as she read an extract from her own best-selling book, How To Train Your Dragon. 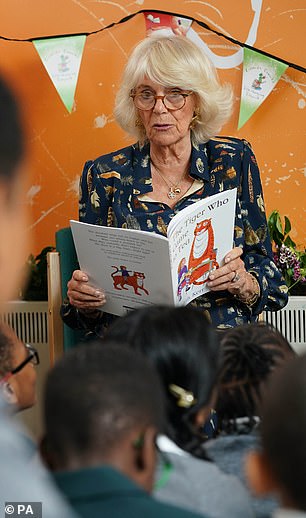 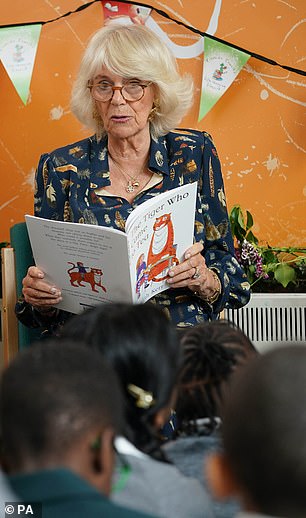 The Duchess of Cornwall was wearing a dash of foundation to compliment her healthy glow, and a touch of lipstick and eyeliner today 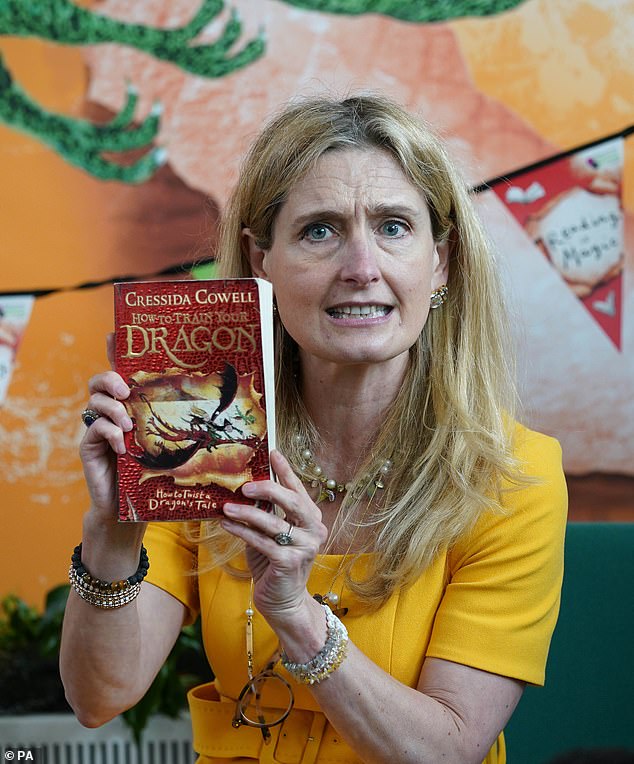 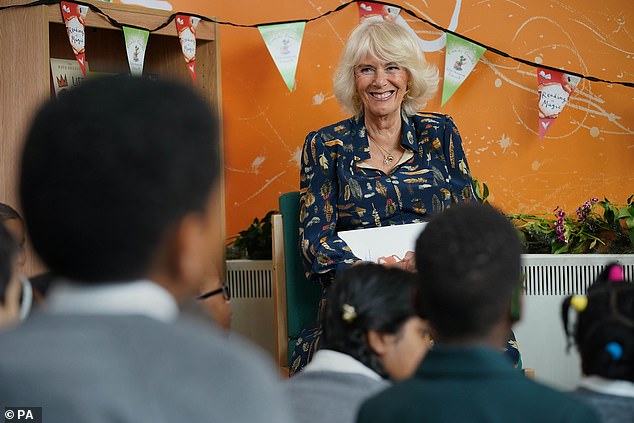 Wearing a blue navy dress adorned with feather detail, the Duchess, well known for her love of literature, seemed delighted to be reading to the children 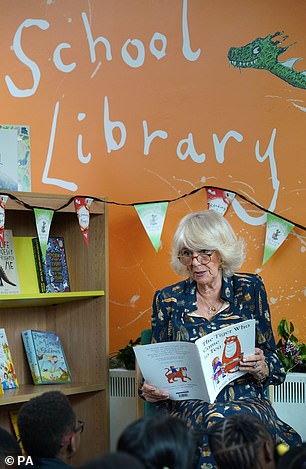 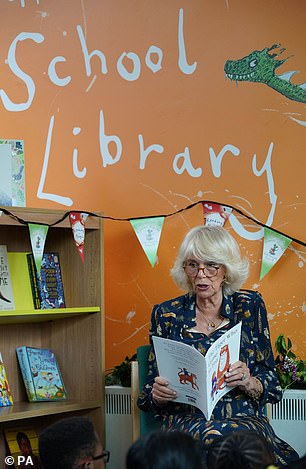 Camilla, pictured, made the most of the beautiful new library as she sat down for her reading this morning 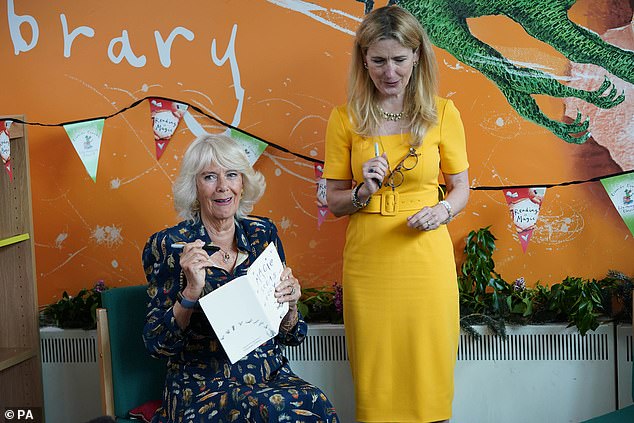 With Cressida Cowell, pictured, Camilla signed the book she had read with a kind words that pupils of Griffin Primary School with revisit throughout the years

Despite the inclement London weather, the author and Duchess then braved it to head outside with the school pupils and their teachers for more literary fun.

Ahead of the outdoor activities, Camilla had picked a sensible nude heel and chose not to take a hand bag. The royal was wearing a few chosen bracelets and gold and silver necklaces.

The Duchess of Cornwall wrapped up in a stylish Burberry trench coat to head outside, where she read some more stories al fresco. Her impeccable platinum blond blow-dry was ruffled by the breeze as she stepped out. 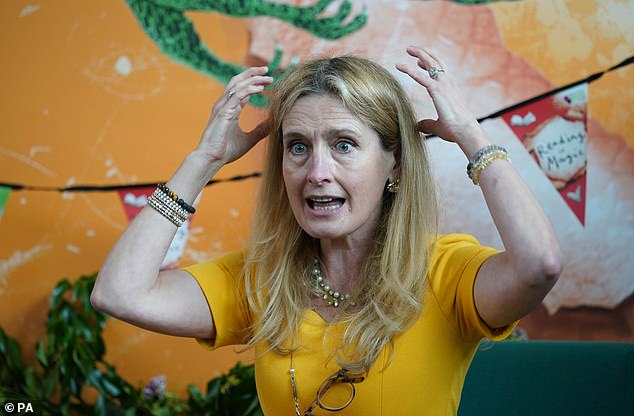 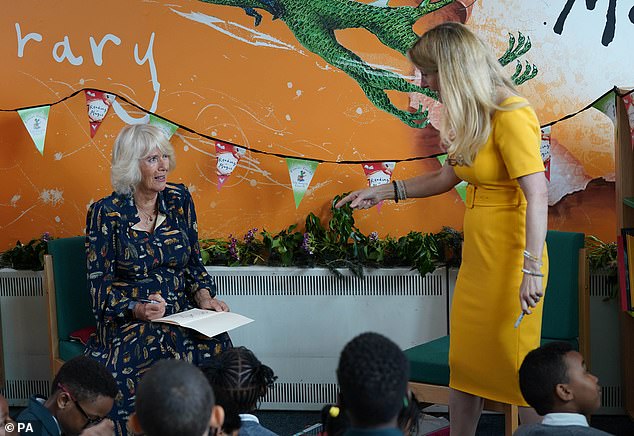 Cressida Cowell, right, instructed Camilla on how to draw during an improvised drawing class that today’s event 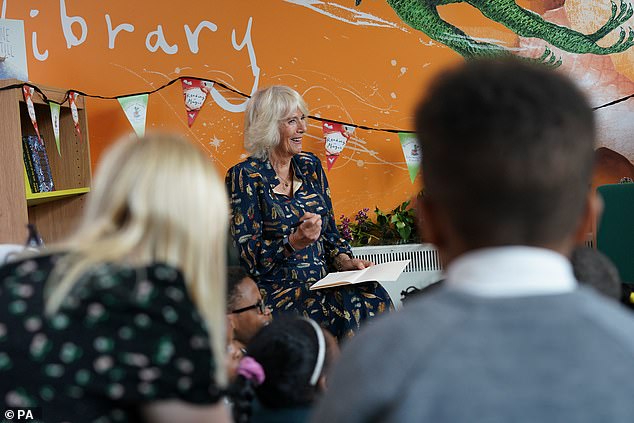 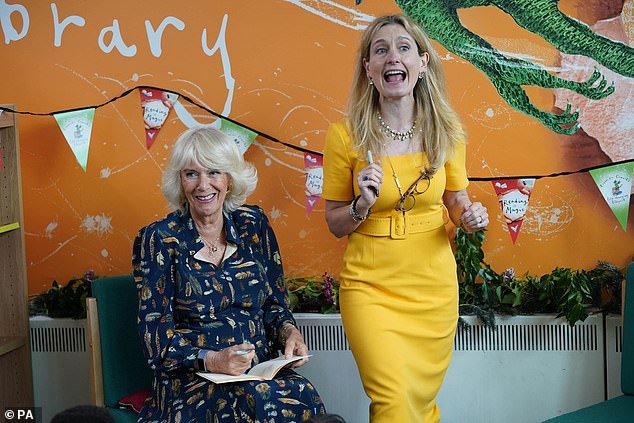 Cressida Cowell, who is the BookTrust’ driving force behind the Life Changing Libraries, seemed excited during the event 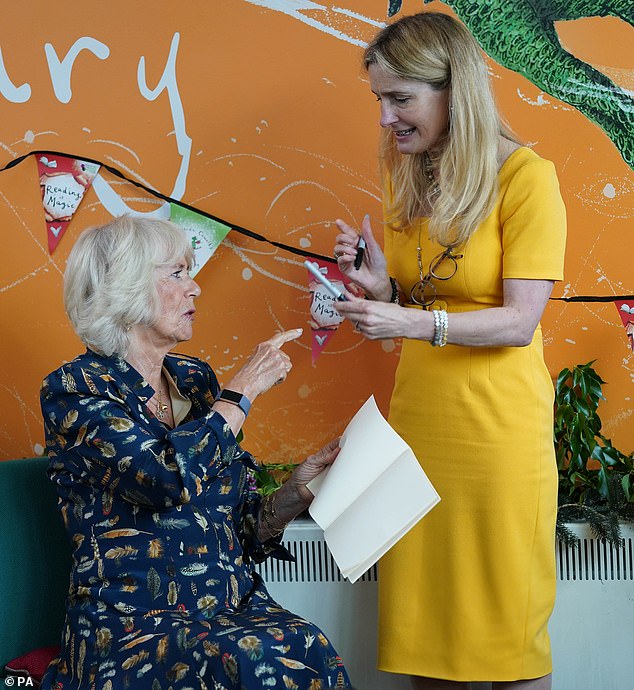 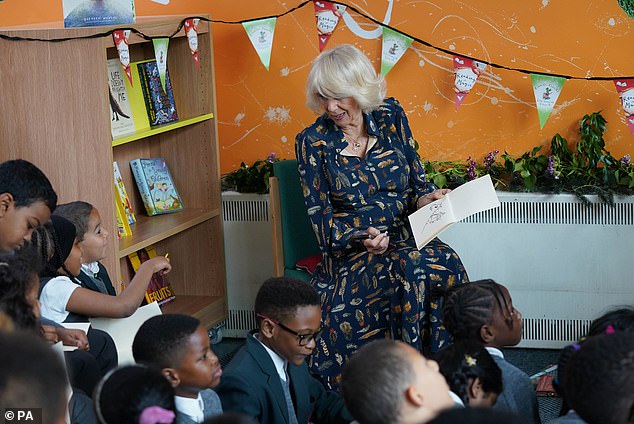 A pupil, left, was not shy to point out something as Camilla was drawing on the book she had just read 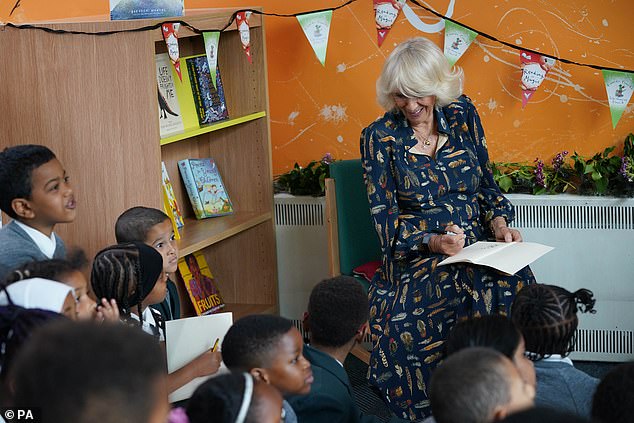 Cressida Cowell is the driving force behind the BookTrust’s Life Changing Libraries campaign, which aims to promote the benefits of accessible, well-stocked libraries to pupils around the country.

In total, six schools have so far launched Life Changing Libraries, with Griffin Primary School being the latest.

Camilla then travelled to St James Park to open their Story Trail, an interactive literary installation around the park.

She was joined by none other than the literary hero Elmer the Elephant to launch the event, which was located by the wooden elephant sculptures that have recently been installed at the park. 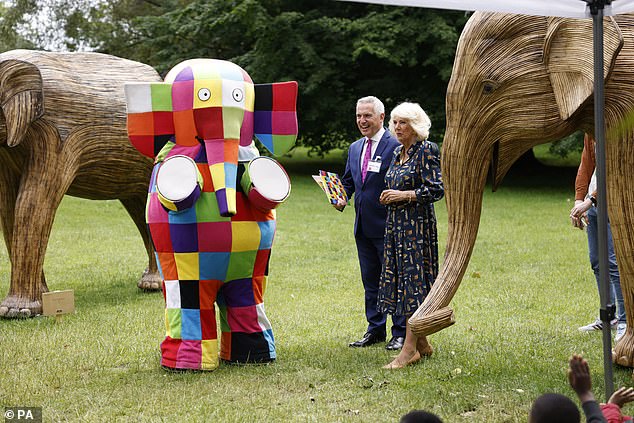 After reading and drawing with the pupils, Camilla headed to St James Park ti open their Elmer Story Trail 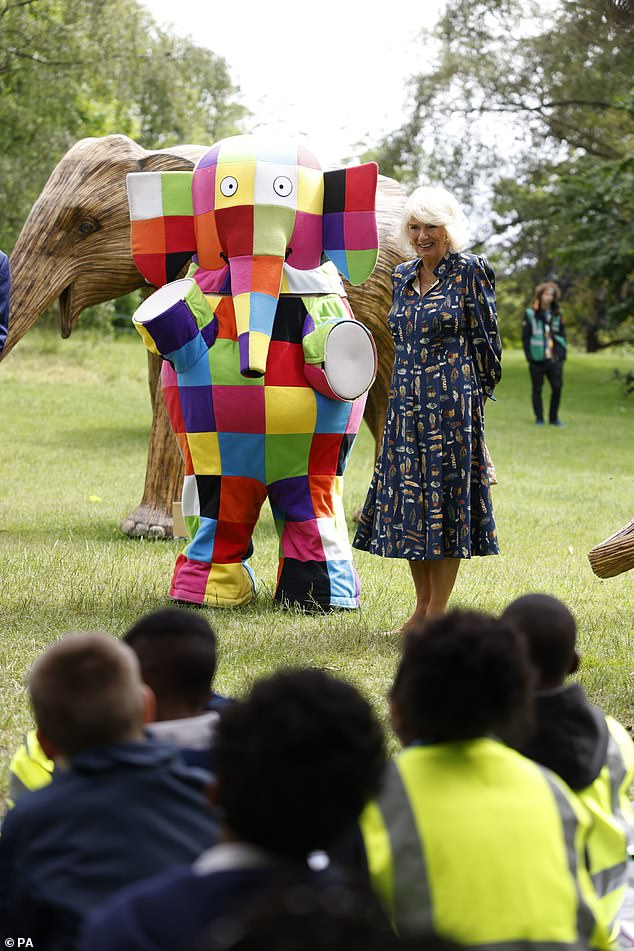 Camilla, who is joint President of the Elephant Family charity, seemed amused by Elmer’s antics in front of the children 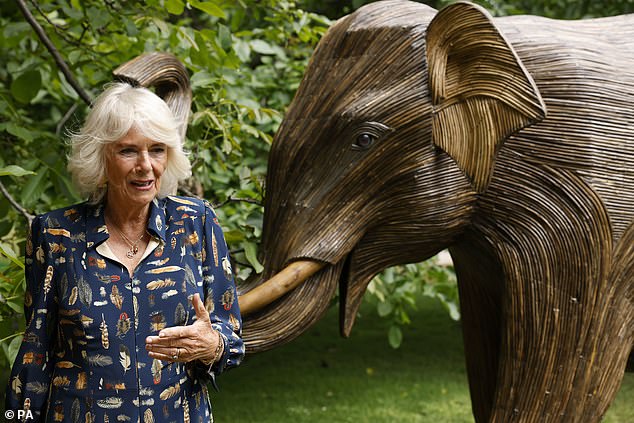 The Duchess, pictured, posed with the elephant sculptures recently installed in St James’s Park during the evet 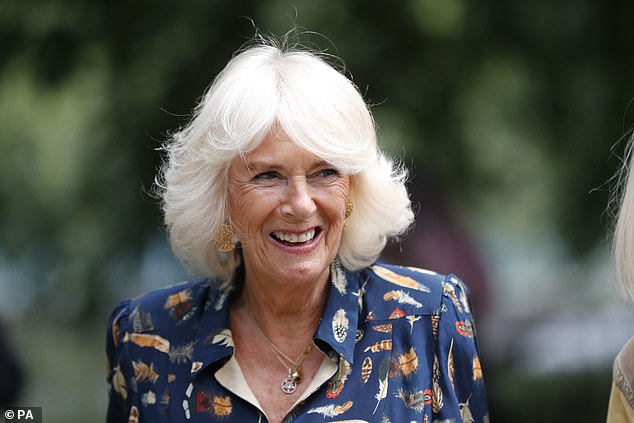 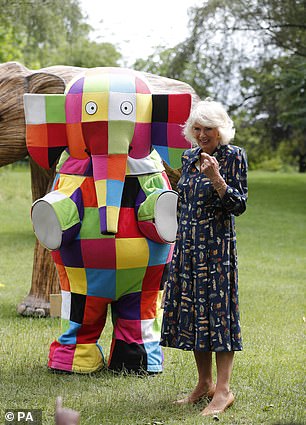 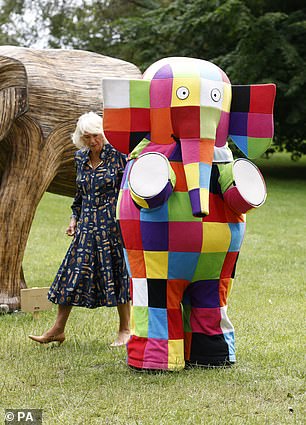 Stealing the show! Camilla could count on the help of Elmer to keep the pupils entertained this morning

Stealing the show! Camilla could count on the help of Elmer to keep the pupils entertained this morning 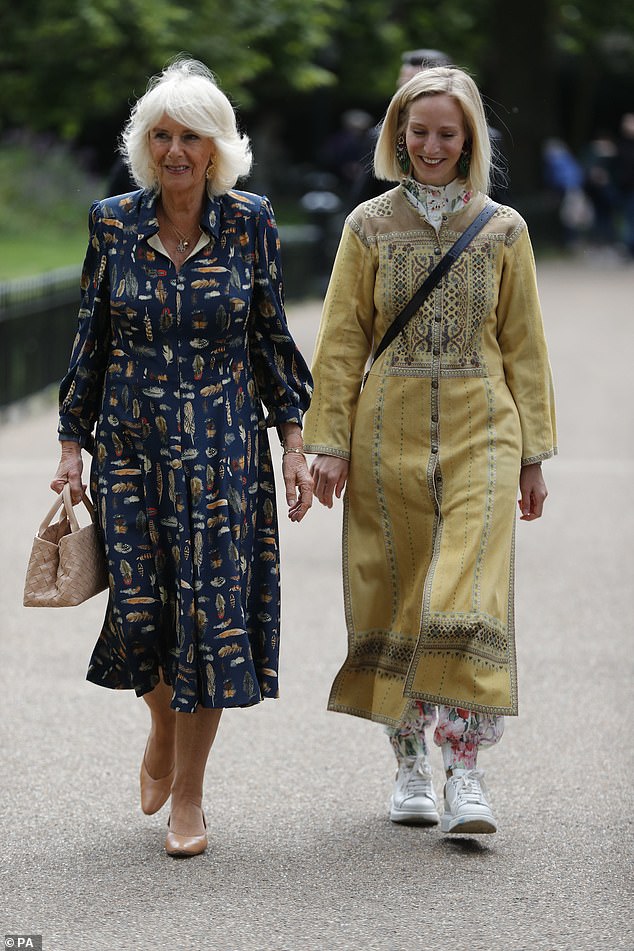 Camilla, in sensible nude heels and carrying a matching handbag, walked up to the Elephant installation with one of the Story Trail participants