DAN WOOTTON: JK Rowling has a spectacular list of achievements to her name but her courage in defying the cancel-mob is her crowning glory

Let me start by emphatically stating that JK Rowling and I have never been friends or even allies.

I haven’t read a word of Harry Potter and a column I wrote in 2018 criticising her for being a Hollywood hypocrite over the #MeToo movement resulted in my lengthy court battle with Johnny Depp.

The column – headlined by my former newspaper on its website as, ‘Gone Potty: How can JK Rowling be ‘genuinely happy’ to cast wife beater Johnny Depp in film? – posed a number of questions to the Potter creator, including: ‘You admitted last year there were ‘legitimate questions’ about Depp’s casting. What were these and how did you overcome them?’

In fact, at one point Rowling even threatened to sue me too. 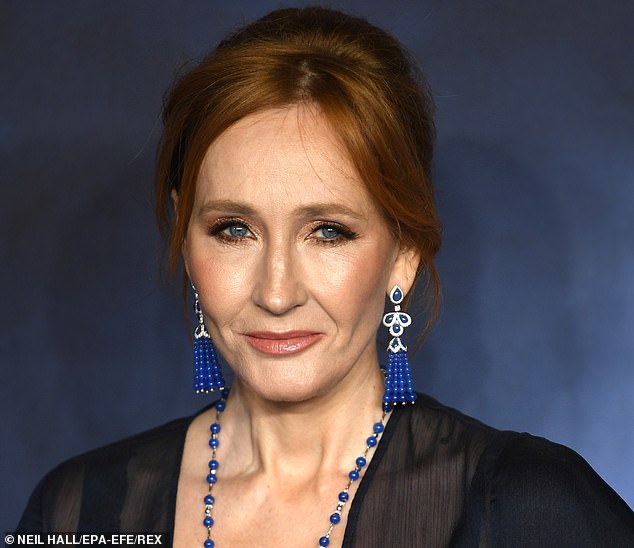 She seemed mad that I had suggested re-casting Depp in the movies was ‘the only decision that would show she’s a woman of true character and principle, even when her famous friends are involved’.

But I held my nerve – aware the facts were on my side – and the very rich Scottish author eventually relented, with a few tough words from her over-paid lawyer thrown my way.

Depp didn’t relent, as you may remember, losing the court case after his ex-wife Amber Heard agreed to give evidence for me, documenting his appalling record of physical abuse and mental torture.

Both Amber and I offered to meet with Rowling separately to explain what we knew about Depp’s behaviour, but she rebuffed our attempts to reach out.

It was obvious to me that her close friendship with Depp – an actor who she idolised – had overshadowed principle on this issue, disappointing for someone who is undoubtedly an advocate for female victims of abuse, given she is one herself.

Following Depp’s court humiliation, a chastened Rowling was finally forced to remove the actor from her Fantastic Beasts film franchise, which she should have done in the first place.

Despite that somewhat chequered history, I have become convinced these past two years that Rowling is one of our greatest Britons – and that verdict has nothing to do with child wizards in round spectacles.

Rather, it’s because Rowling has been prepared to give up virtually everything she previously prized – including being a pin-up for the entertainment establishment – to stand up for the rights of women everywhere, with a nuanced but supportive view of the trans community that just so happens to go against the liberal orthodoxy. 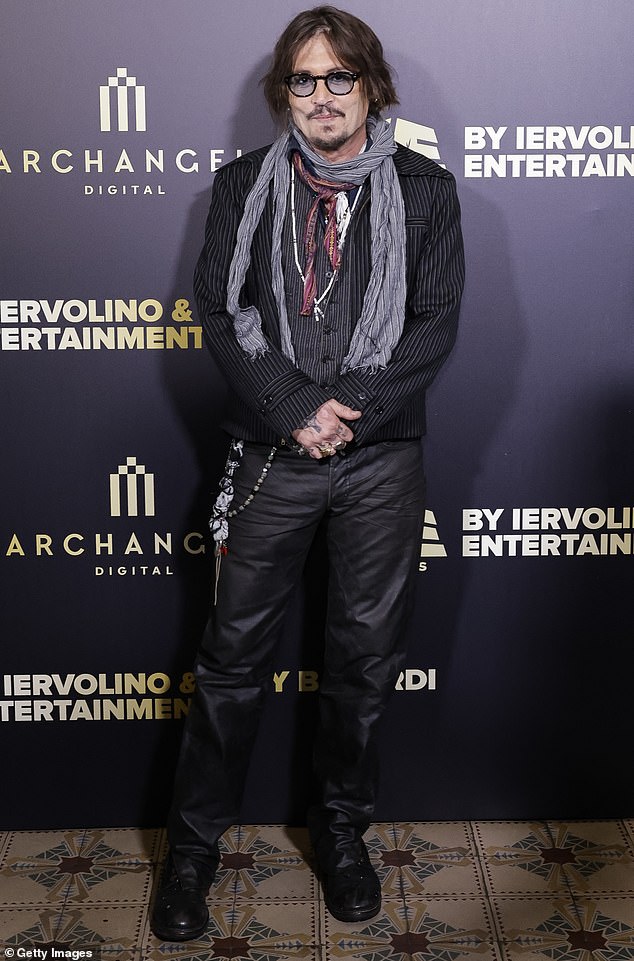 In the cruel process of cancellation, she has learnt first-hand just how hypocritical Hollywood can be; virtually every showbiz industry figure has turned its back on one of its previously most popular figures to protect themselves from the social media hate mob.

Even Harry Potter film franchise stars like Daniel Radcliffe and Emma Watson, who all would have been no-marks without her, don’t want to be associated anymore.

Rowling was left out of the new HBO Max reunion and saw her name axed from her own trailer for the next Fantastic Beasts instalment.

And today the MailOnline has revealed she’s been cancelled by an Essex secondary school that specialises in performing arts.

Boswells School in Chelmsford axed Rowling as the namesake for one of its houses because of her ‘comments and viewpoints surrounding trans people’ following ‘requests from students and staff’.

In a newsletter, the school added: ‘Her views on this issue do not align with our school policy and school beliefs – a place where people are free to be.’

But one parent quite rightly fumed: ‘This is censorship – JK Rowling is a good example of achievement through adversity. Not everyone thought she should go, a lot of schools seem to be doing the same thing at the moment sadly.’

The house has been re-named after the Olympic athletics champion Dame Kelly Holmes.

Which is ironic in itself, given that Holmes has also been criticised for supporting a campaign in 2019 that said sportswomen were at a clear disadvantage against trans competitors – another common sense position that has been weaponised by trans activists.

I imagine it’s only a matter of time before Holmes is axed too and replaced by Eddie Izzard.

So what are these heinous views that have made Rowling persona non grata in polite society?

Well, she openly mocked a June 2020 article that described women as ‘people who menstruate’. 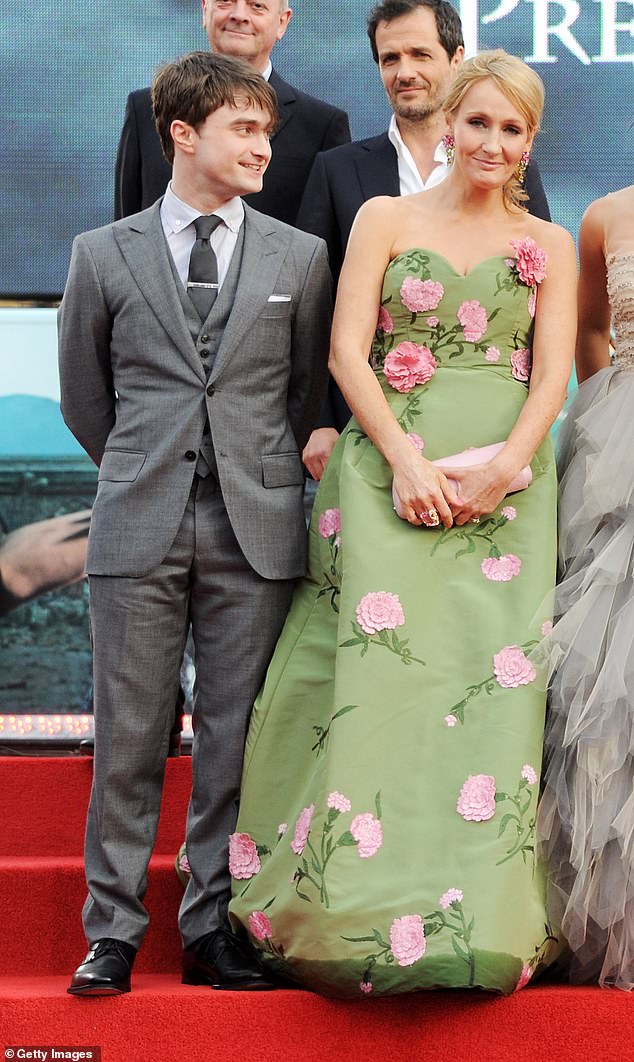 Rowling (pictured with Daniel Radcliffe in 2011) has learnt how hypocritical Hollywood can be; virtually every showbiz industry figure has turned its back on her to protect themselves

Quite simply, she believes in biological sex.

Just like the scientist Robert Winston who received hate mail for stating the fact that, ‘you cannot change your sex, your sex actually is there in every single cell in the body’.

Rowling also believes in the need for women to be protected from men in certain spaces like toilets and changing rooms.

So why will you have seen so many people online refer to her as transphobic?

Because they are intellectually dishonest.

In fact, Rowling has been clear to stress ‘trans lives matter’ and ‘trans rights are human rights.’

She recently clarified her position further by writing: ‘Small but important point: I’ve never said there are only two genders. There are innumerable gender identities.

‘The question at the heart of this debate is whether sex or gender identity should form the basis of decisions on safeguarding, provision of services, sporting categories and other areas where women and girls currently have legal rights and protections.

‘Using the words ‘sex’ and ‘gender’ interchangeably obscures the central issue of this debate.’

But here’s the reality in all of this: JK Rowling is one of the first human beings on the planet to beat society’s current obsession with cancel culture.

Now that she’s no longer a member of the liberal establishment, quaffing champagne at posh events with elite multimillionaires, she’s become a crusader for everyday women and should be taken very seriously by those in power. 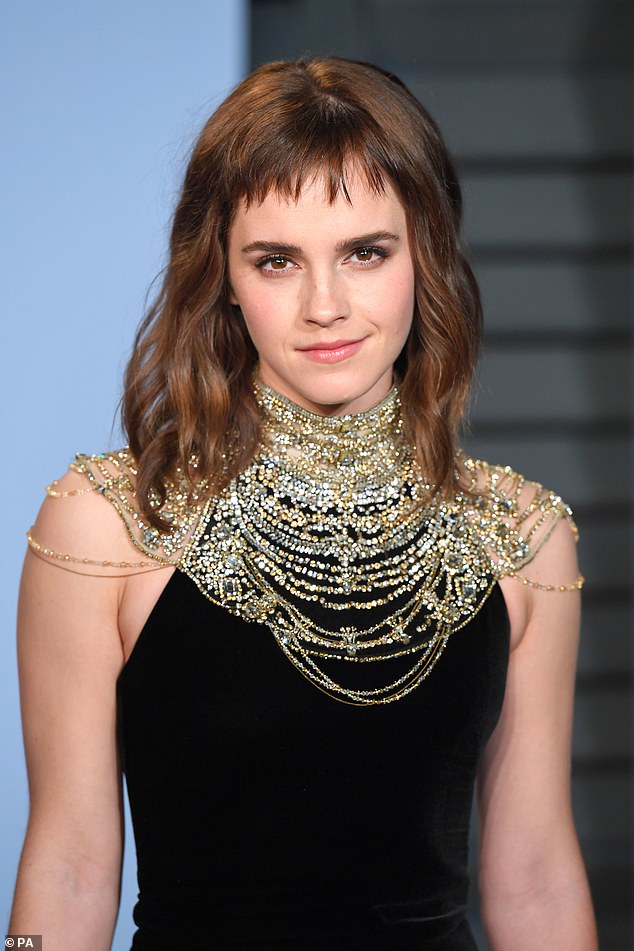 Even Harry Potter film franchise stars like Daniel Radcliffe and Emma Watson (pictured), who all would have been no-marks without her, don’t want to be associated anymore

These numerous bids to cancel her are only enhancing her position as a champion for females around the world.

She is adored and revered by ordinary folk who are roundly ignoring the various bids to silence her.

Hilariously, the far-left extremists at The Guardian newspaper removed an online form asking readers to nominate their ‘2021 Person of the Year’ after an overwhelming number submitted Rowling.

When they revealed the list of 13 winners, they had to awkwardly explain: ‘In a sign of the ongoing debate over gender issues, many readers also nominated the author JK Rowling.’

Rowling’s platform is big enough to render her uncancellable.

She has 14 million followers on Twitter alone, where she selectively shares her so-called controversial views, which are actually just common sense.

I think it’s possible that in many decades time when her epitaph is written Rowling will be remembered for far more than being the author behind the best-selling book series of alltime.

She will go down as a truly modern feminist who fought back against those trying to destroy the hard-fought rights of woman adult human females to live freely and be protected.

I’m more than happy to forget her blind spot over Johnny Depp because she’s become an unquestionable force behind fact-based feminism to protect the rights of women.