The rise of culturescaping! Trend sees influencers create Instagram-friendly themes to watch their favourite TV shows, from Emily in Paris with croissants to bingeing on Queen’s Gambit with vodka and chess board

With millions of people stuck inside for most of the last year, streaming services have seen a huge boom with the likes of Netflix’s Money Heist and viral sensation Tiger King being viewed more than 64 million times.

2020 also saw the launch of Disney + with original series WandaVision and The Mandalorian raking in millions of views, with Broadway play Hamilton and Mulan also hitting the small screen as cinemas and theatres remain closed.

And while binge watching has become a national sport, savvy Instagrammers are taking their viewing nights to the next level and pairing their screenings with themed decorations and dishes to create a perfect image of a cosy night in.

This has become the latest lockdown social media trend, known as ‘culturescaping’ which has seen thousands online pose with a cup of coffee and a croissant to watch Emily in Paris or don a class of ice cold vodka and chess board to binge the critically acclaimed Queen’s Gambit. The new trend, known as culturescaping, sees people ‘theme-ing’ their decorations and food to match the TV show or movie their binge-watching in lockdown. Pictured: An Instagram user watching Bridgerton Smash hit Brigerton is a popular choice among culturescapers, with people propping up their laptops on a bed with a creamy coffee and blankets for a Hyggee-vibe One Instagram user paired her Bridgerton watcher with a dessert, candle and cold drink for a cosy lockdown watch Binge-tastic! Another user paired fine jewellery and Ferrero Rocher and wine with her iPhone viewing of Bridgerton

The term, coined by Grazia, sees influencers pairing drinks and snacks with foods that ‘match’ the show of film their watching.

Smash hit Brigerton is a popular choice among culturescapers, with people propping up their laptops on a bed with a creamy coffee and blankets for a Hyggee-vibe, while some have even posed it in front of Wuthering Heights and other classic literature to pay tribute to the 19th Century setting.

Alongside lockdown binge hits, such as Emily in Paris and The Queen’s Gambit, others have opted for classic noughties and nineties hits, including Friends, Gossip Girl, Breakfast at Tiffany’s Sex and the City.

While it might seem odd to be sharing a TV set-up, some have suggested it’s because it’s one thing many have in common in lockdown, and offers a shared experience while people are unable to socialise – and pose – with friends.

With pictures often featuring with herbal teas, cosy socks or even showing an iPad propped up in a bubble bath, it could also be seen as another element in the rise of self-care in lockdown. Time for high tea! One Instagram user paired soup in a tea cup and crumpets with their watch of The Crown 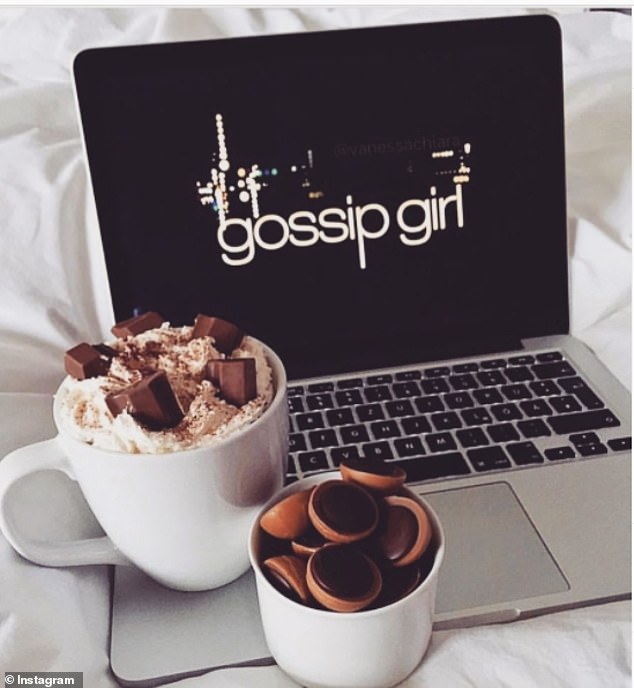 Alongside lockdown binge hits, such as Emily in Paris and The Queen’s Gambit, others have opted for classic noughties and nineties hits, including Friends, Gossip Girl, Breakfast at Tiffany’s Sex and the City

Either way, the trend has become so popular that Disney+ are celebrating their service as Star launches next week with special menus attached to each show.

The trend appears to be growing, with PR guru and pop culture expert Nick Ede telling FEMAIL it won’t go away any time soon. 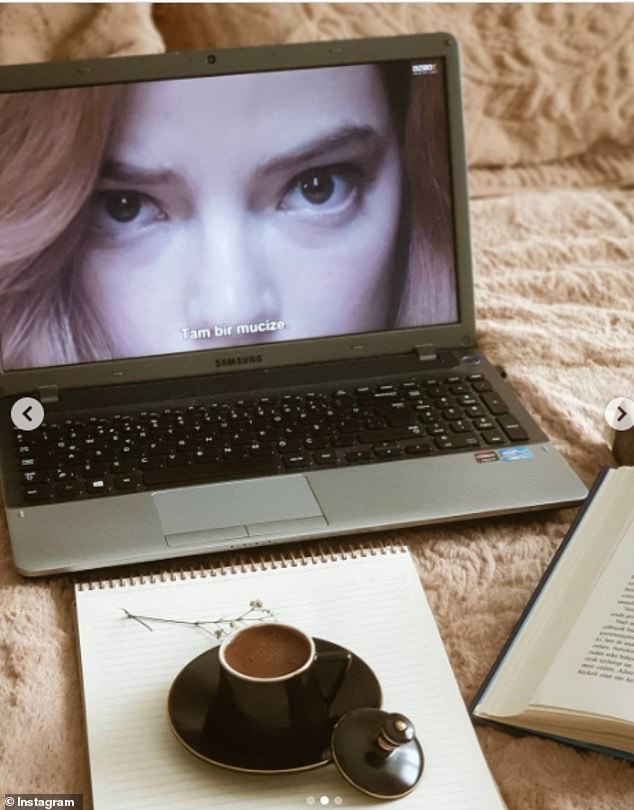 The Queen’s Gambit, which set the record as the most-watched scripted limited series on Netflix this year, with 62 million member accounts tuning in to the critcially-acclaimed show is also a popular Instagram hit Tres chic! Emily in Paris, the controversial Darren Starr sitcom about an American in the City of Lights is also very Instagrammable

‘The new trend for culturescaping is hitting social media like a bullet train,’ he said.

‘Forget lockdown loungewear selfies they are so 2020… its now all about what you’re streaming and how you’re immersing yourself in your binge watch.

‘The reason why its becoming such a trend it primarily because people are in lockdown and all they are doing is watching streaming services and so instead of boring their fans and followers with a still or a reel of the opening credits they are ‘theme-ing’ their viewing experience around the show they are watching. 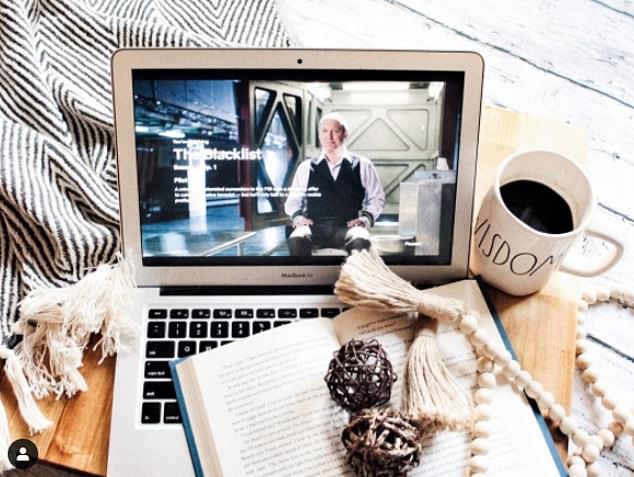 American crime thrillerThe Blacklist, which is available on Netflix, also featured on one Instagram users feed

‘This is a creative way of bringing a new aesthetic to social media and is set to become even more popular and more creative.

‘It will only be a matter of time when culturescaping becomes a marketing tool for brands and for the TV shows themselves.

‘Theme-ing’ your frame as you immerse yourself in Brigerton or Below Deck will become the norm on your grid. 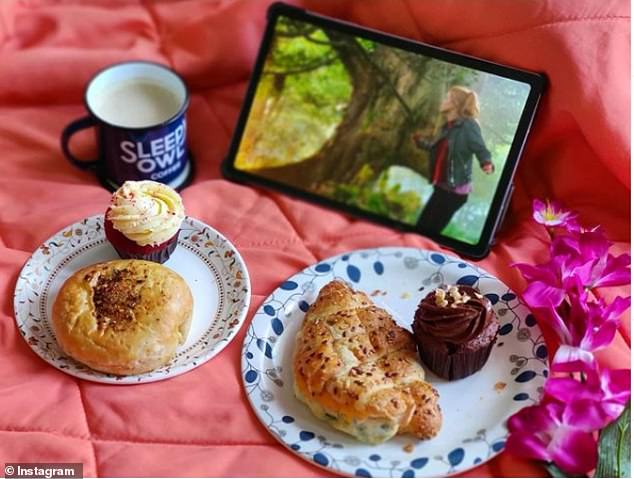 Cupcakes and chill! Another user showed off a tablet with her cakes and croissants as she watched a show

Jasmine Wicks-Stephens, communications expert, Founder of Known added FEMAIL: ‘#culturescaping has emerged as a trend on social as we find ourselves couped at home, without the luxury and interesting backdrops that our pre-pandemic lives used to provide.

‘We can’t take pictures of brunches or selfies in the mirrors of the latest restaurants.

‘The result has been a wave of people adapting ways to create content, that can still sell an aspirational lifestyle.

‘People use social media as a way of escapism and the influencers that we follow are ready to share their lives with us to allow us to escape into them.

‘This is the just the lockdown version of that. Perfect for a blue Monday! Another user showed off her chic set up with a latte and cute kitten as she watched Breakfast at Tiffany’s Spooky! Others have shown their Harry Potter bingewatch pairing hot chocolate and wands with the hit films And Just Like That…! The noughties hit Sex and the City is known for its gorgeous fashion which this Instgram user reflected in their snap 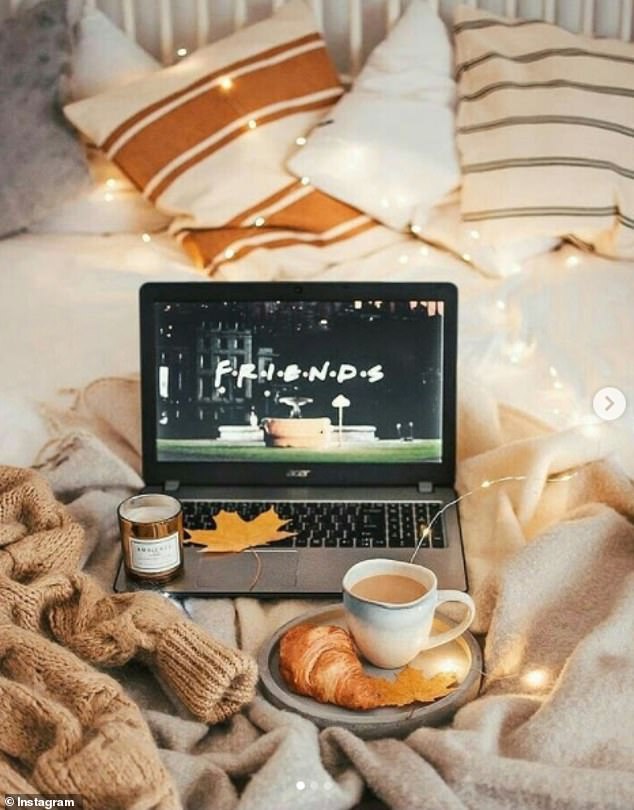 I’ll be there for you! One user watched nineties hit Friends with a cup of coffee and croissant