Federal Liberal MP Craig Kelly has been banned from posting on Facebook for one week after he violated the tech giant’s COVID-19 misinformation policy.

Facebook also deleted four coronavirus-related posts from Mr Kelly’s official MP Facebook page, including one where he likened the wearing of masks by children to child abuse. 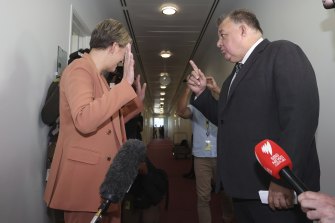 Liberal MP Craig Kelly was confronted by Labor frontbencher Tanya Plibersek in the corridors of Parliament House over his promotion of alternative treatments for COVID-19.Credit:Alex Ellinghausen

Mr Kelly has used his page, which has more than 80,000 followers, to promote treatments for COVID-19 at odds with official government and medical advice.

He confirmed Facebook had suspended him from posting on the platform for seven days for repeated violations of its community standards.

“They blocked me for posting for seven days, I believe for completely spurious reasons,” Mr Kelly said.

“If an elected member of Parliament can’t post about expert medical opinion, I think it’s a very sad day for freedom of speech.”

In a statement, a Facebook spokeswoman said: “We don’t allow anyone to share misinformation about COVID-19 that could lead to imminent physical harm. We have clear policies against this type of content and will remove it when we become aware of it.”

Mr Kelly said his suspension, first reported by technology website Gizmodo, was due to expire on Wednesday and he was appealing for the reinstatement of the deleted posts.

Facebook announced last week it was stepping up efforts to crack down on a wider range of COVID-19 misinformation, including claims such as “Wearing a face mask doesn’t help prevent the spread of COVID”, “Social distancing does nothing to reduce COVID in the community” and “COVID tests come pre-infected with the disease”.

At the time, Mr Kelly said he was “not at all” worried he would be captured by the policy.

On his page, he has promoted drugs such as ivermectin and hydroxychloroquine as treatments for COVID-19, often posting multiple times a day, and has linked to non-peer-reviewed studies questioning the efficacy of masks in preventing the spread of COVID-19.

His actions drew widespread media coverage last week when he clashed with Labor frontbencher Tanya Plibersek in the corridors of Parliament House, where she accused him of spreading “crazy conspiracy theories”.

Mr Kelly subsequently issued a statement of support for the government’s vaccine rollout after being rebuked by Prime Minister Scott Morrison.

Get our Coronavirus Update newsletter

Stay across the news you need to know related to the pandemic. Sent Monday and Thursday. Sign up here.