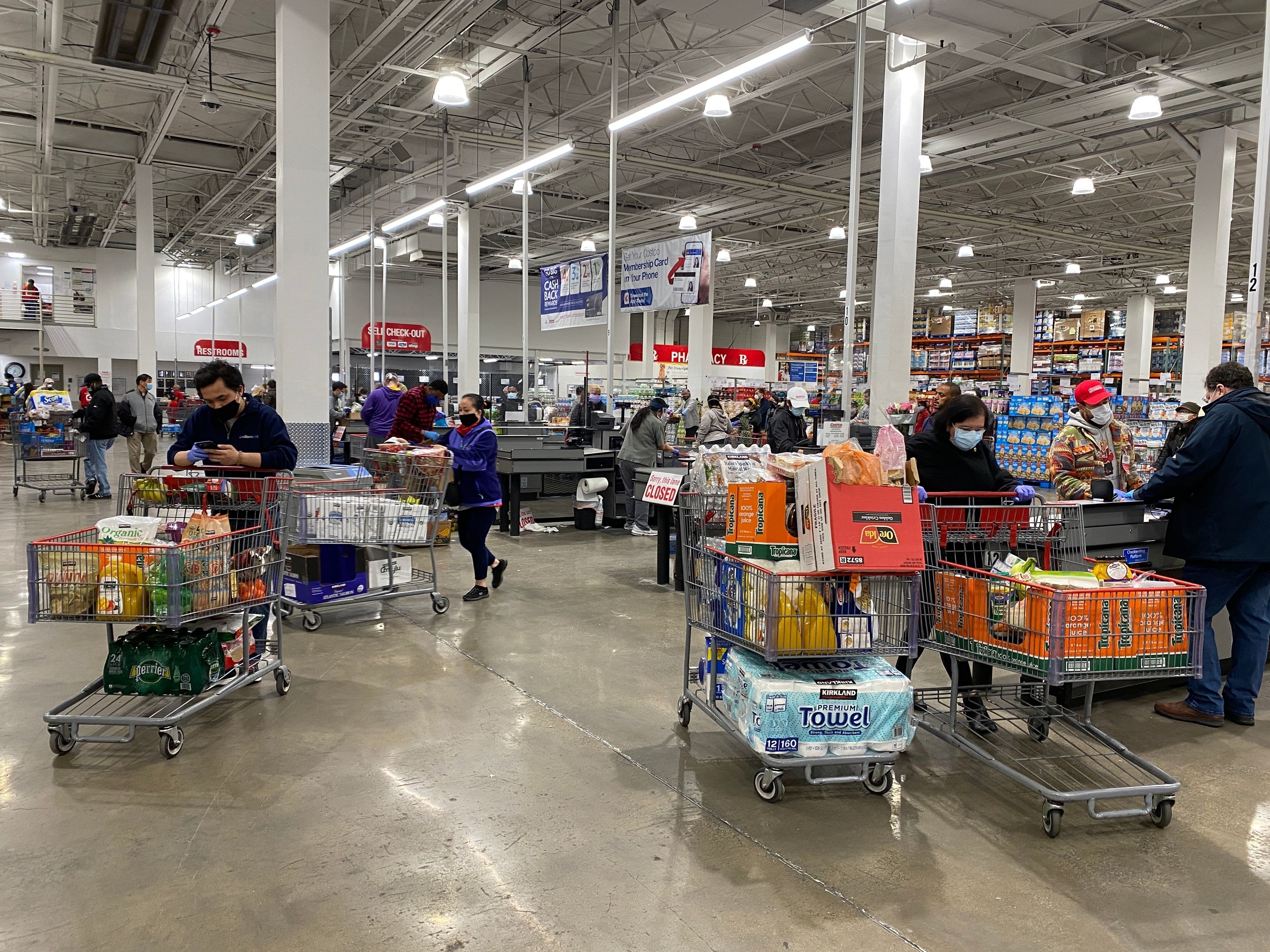 Shoppers wear masks as they get supplies at a Costco on April 18, 2020, in Arlington, Virginia.

Costco workers across the US say the company has loosened or abandoned social distancing measures in a bid to increase sales, putting them and customers at greater risk of contracting the coronavirus.

Over the past two weeks, more than a dozen employees in warehouses across California and New York, as well as in Texas, Oregon, Michigan, Colorado, Connecticut, Minnesota, and Florida have told BuzzFeed News that upper management has increased the number of shoppers allowed inside, spiking door count numbers back to pre-coronavirus levels and making it even harder to maintain social distancing and ensure a safe, sanitized environment.

Several employees also told BuzzFeed News that corporate leadership visited their locations to do “walks” and ordered the removal of cones and tape used to keep customers in socially distanced lines outside the entrances. In some cases, employees said they were told to have waiting shoppers stand in line inside the store, causing more crowding.

“[Management] is in fear of turning people away. They still do not care that we are in the middle of a pandemic,” an employee from Texas told BuzzFeed News. “They just want sales. They are allowing up to 600 people in the store at a time. Employees have to dodge people like it’s a minefield. It’s just a complete breakdown at every level.”

Costco did not respond to BuzzFeed News’ request for comment, but its CEO, Craig Jelinek, has said in the past that the company would not spend time engaging with “media or other critics.” In response to a BuzzFeed News investigation earlier this month, Jelinek told his employees in an internal email, “we’ve undertaken countless and extraordinary changes in our warehouses … for the health, safety, and well being of our employees and members” and called BuzzFeed News’ reporting “unfair, mostly unfounded, and sensationalistic in many ways.”

Over the past six weeks, BuzzFeed News has spoken to about 150 Costco employees in an array of positions who have said that the retail giant’s delayed response to the coronavirus crisis left them unprotected and uninformed. At least 62 workers have tested positive for COVID-19 and several have died after contracting the disease, according to interviews and internal memos obtained by BuzzFeed News.

In response to the pandemic, Costco has provided masks and gloves for employees, required plexiglass shields at registers, and mandated social distancing in break rooms. The company also directed warehouses to post notices of confirmed COVID-19 cases in stores, extended a $2-an-hour pay boost for warehouse workers until mid-May, and enabled employees to take coronavirus-related unpaid leaves of absence until the end of May. 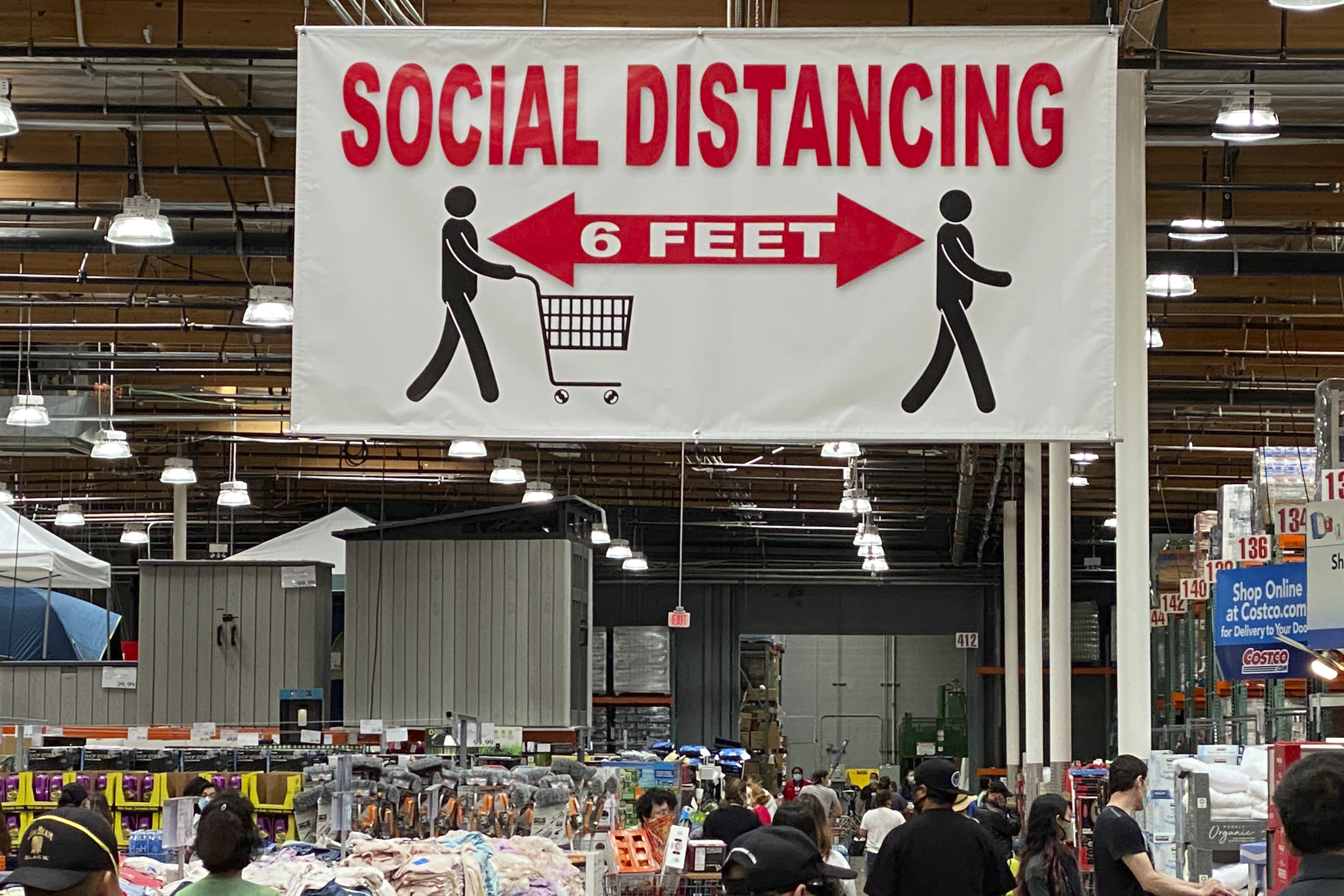 A social distancing sign at Costco Wholesale store amid the global coronavirus pandemic on April 27, 2020, in Alhambra, California.

The company also recently announced that it was returning to normal business hours on May 4 and that all employees and customers at its nearly 550 US locations would be required to wear masks inside the store — the largest American retailer yet to do so.

In March, Costco altered its shopping policy to “allow no more than two people to enter the warehouse with each membership card” and ordered limits on shoppers in the store after it came under fire for images and stories showing hoards of customers stocking up on supplies.

But workers say crowd-regulating measures are being abandoned despite the fact that their communities remain under stay-at-home orders and coronavirus case numbers continue to rise. In new, internal operational guidelines sent to US managers on April 27 and obtained by BuzzFeed News, the company tweaked its messaging on store capacity, which employees say has resulted in packed warehouses.

In the updated internal operational policies, corporate officials also directed warehouses to “decide your capacity based on the number of registers” and “carefully control access.”

“This might result in a long queue of members waiting to enter. That is preferred to a huge bottleneck inside your building where we cannot assure 6 feet between members,” the March 31 guidelines state.

At the end of February and in the thick of the coronavirus panic, Costco saw a dramatic spike in sales and traffic. But after the company enacted coronavirus safety measures, those strong numbers tapered off. “These developments slowed sales as compared to the first half of March,” David Sherwood, the company’s assistant vice president of finance, told investors in early April.

In their April 27 update, the company altered language on capacity and instructed warehouse managers to keep lines short and moving by being prepared to open “as early as needed to prevent the formation of a long line in the morning” and control access while still “maximizing throughput so members are serviced in a timely fashion.”

The document, which repeatedly reiterates the importance of social distancing, also states that warehouses across the country should admit 300 people at opening unless “restricted to a lower amount by state or municipal order.” After that, when the areas clear, door employees should “admit more customers to a maximum of 600 people at a time.”

Employees told BuzzFeed News that the result has been an opening of “floodgates” and “highly unsafe” environments. 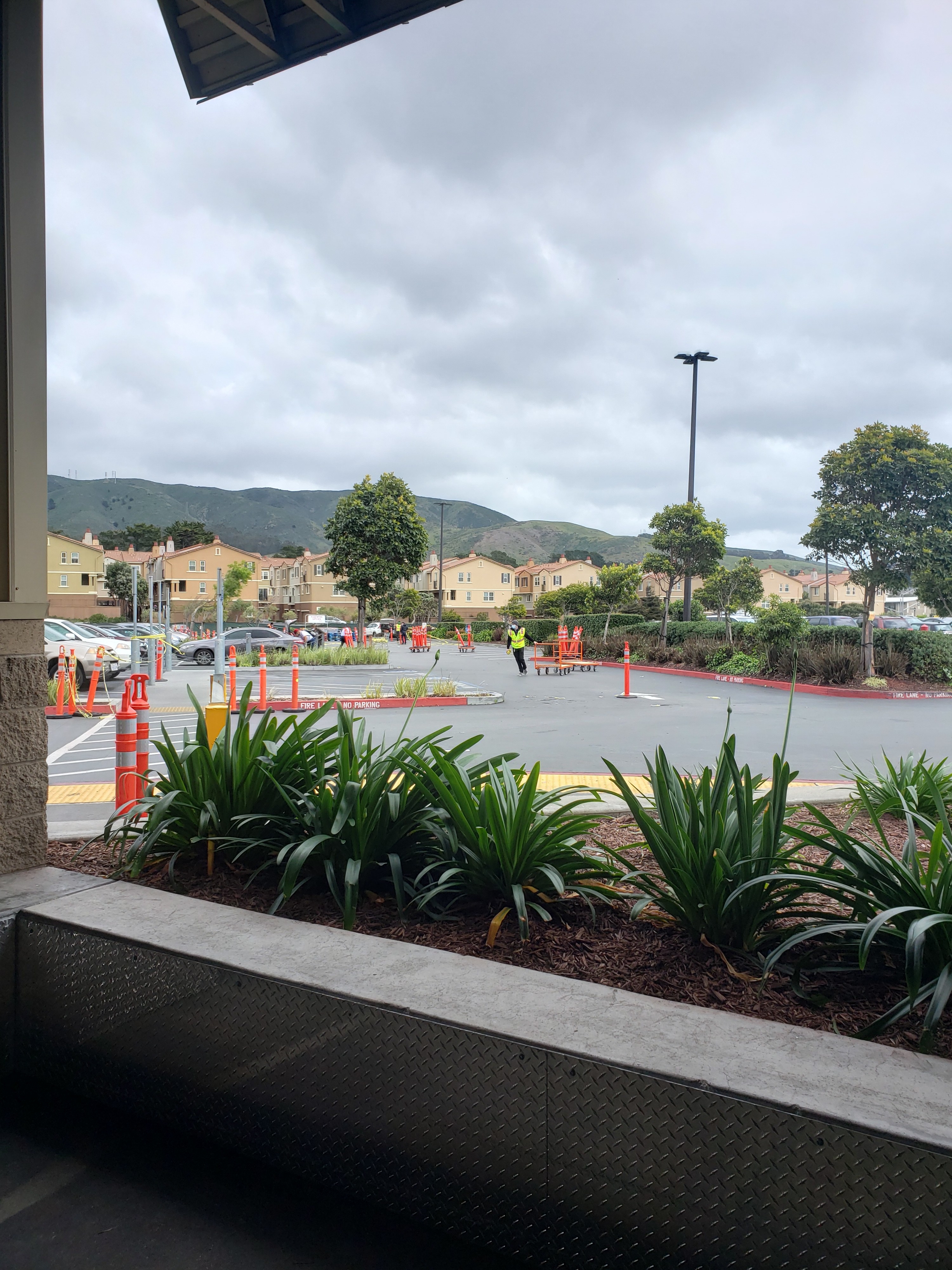 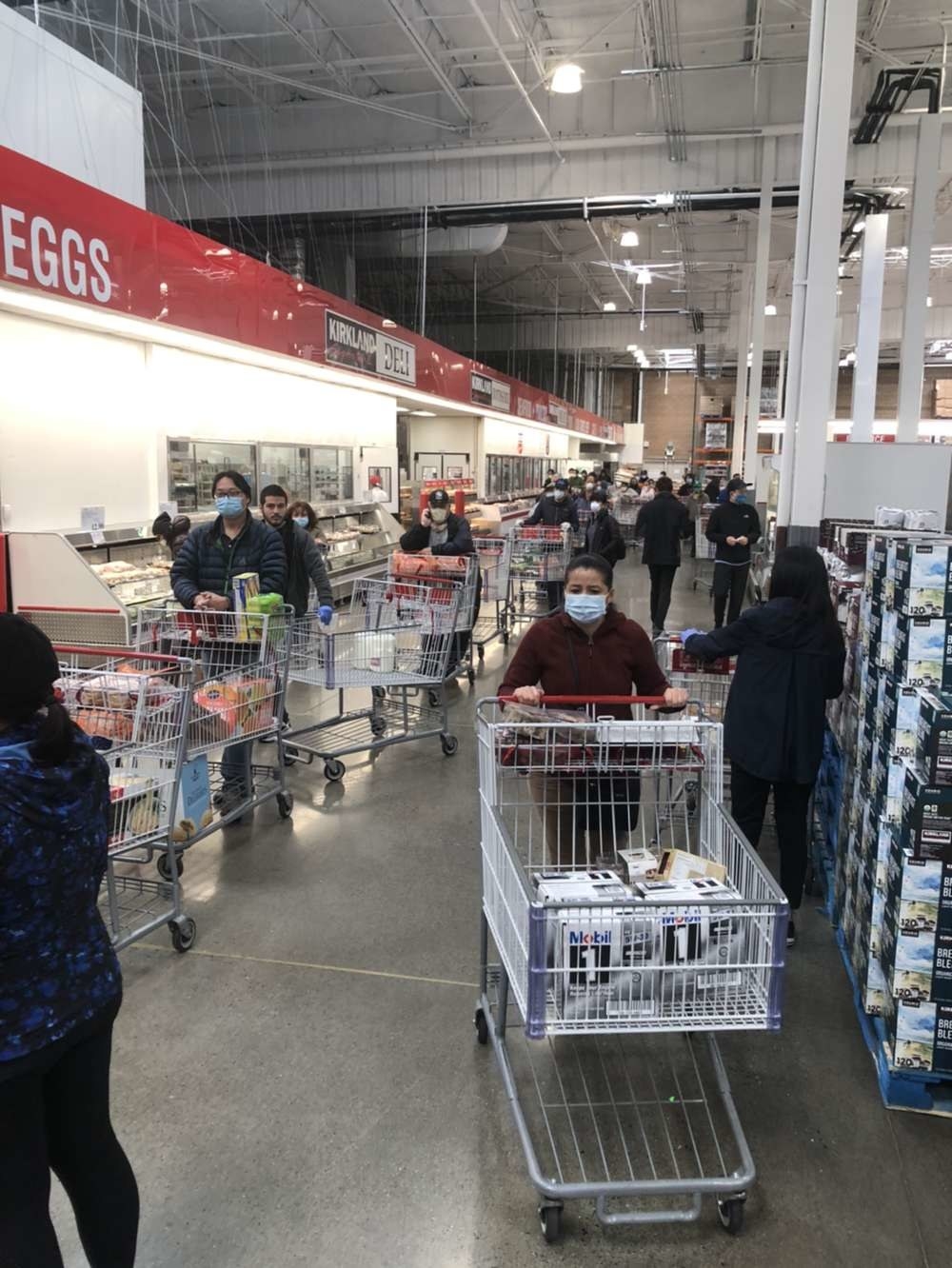 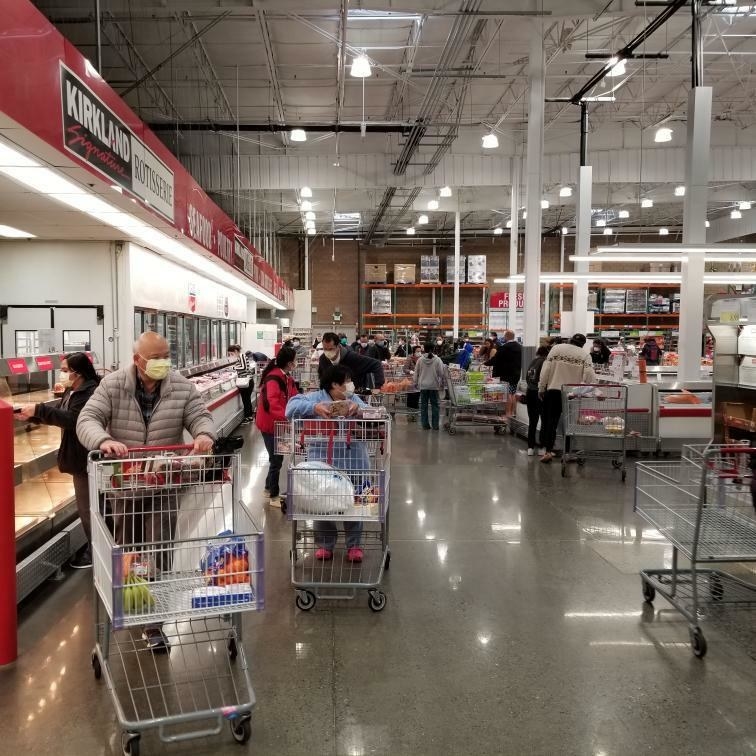 On April 20, corporate leaders visited a warehouse in South San Francisco and removed the orange cones and “ripped down” the yellow caution tape used to organize people waiting to enter the store, according to three employees, one of whom also provided BuzzFeed News with photos.

“They said the caution tape looked ugly,” the worker told BuzzFeed News. “I asked them what are they doing to protect us? What about our safety?”

Several employees walked out, already dismayed by the ballooning number of shoppers allowed inside, their colleagues said. Photos of the warehouse show crowded aisles and checkout lines of mask-wearing shoppers waiting much closer to each other than the recommended 6 feet.

At another warehouse in Hayward, California, several employees told BuzzFeed News their coworkers also walked out over the number of shoppers allowed inside. Door count tallies provided to BuzzFeed News show that between 8:30 and 9 a.m. on April 28, 784 people entered the warehouse. By noon, 2,853 shoppers had entered.

Until recently, Costco employees had been recording each membership card that came through the door, which did not account for the fact that entire families or friends could enter together on the same card.

At a warehouse in the Dallas–Fort Worth area, a supervisor described door count numbers as “insane” and said that “the rules are out the window.” Corporate had instructed managers in his area to allow up to 300 people to enter the door at opening and keep the maximum at 600, according to a memo sent to BuzzFeed News.

“Now they may not seem like a lot in our giant warehouses. It is, especially with us reaching peak,” He said. “Looking at places like Home Depot who are only letting in 25 at a time here in Texas. It is complete bullshit.”

On April 14, 3,483 people went through the doors, according to sheets given to BuzzFeed News. The next day, the store had a total of 3,492 customers, which is about what the store had been averaging before the coronavirus forced stay-at-home orders. The numbers have continued to grow, he said, with his store letting in about 300 people every half hour on busy days. And since Costco has not closed off nonessential parts of the store, people often take their time milling around and looking at clothes, books, and other goods, so the number of shoppers is higher than the number entering.

“While it looks like Costco is doing all it can, it’s all essentially for show,” he said. “It doesn’t matter how wide you make your aisles, how many registers you take out. If you are letting in as many people as you want, the virus will continue to spread, endangering employees in the process.”

Workers in Colorado, Florida, Oregon, Minnesota, and Michigan detailed similar experiences. In Connecticut, where the state has ordered store capacity to be capped at 50%, a door employee who works in member services told BuzzFeed News a manager had instructed them to “be flexible” on the policy because of “how bad” the low door count numbers looked.

“We don’t even bother keeping track of approaching capacity even though the state mandates it,” the worker said. “Almost nothing has been done to address the severity of the vulnerable position in which the door employees find themselves. At this point, I know it’s just a matter of time before I get the virus.” 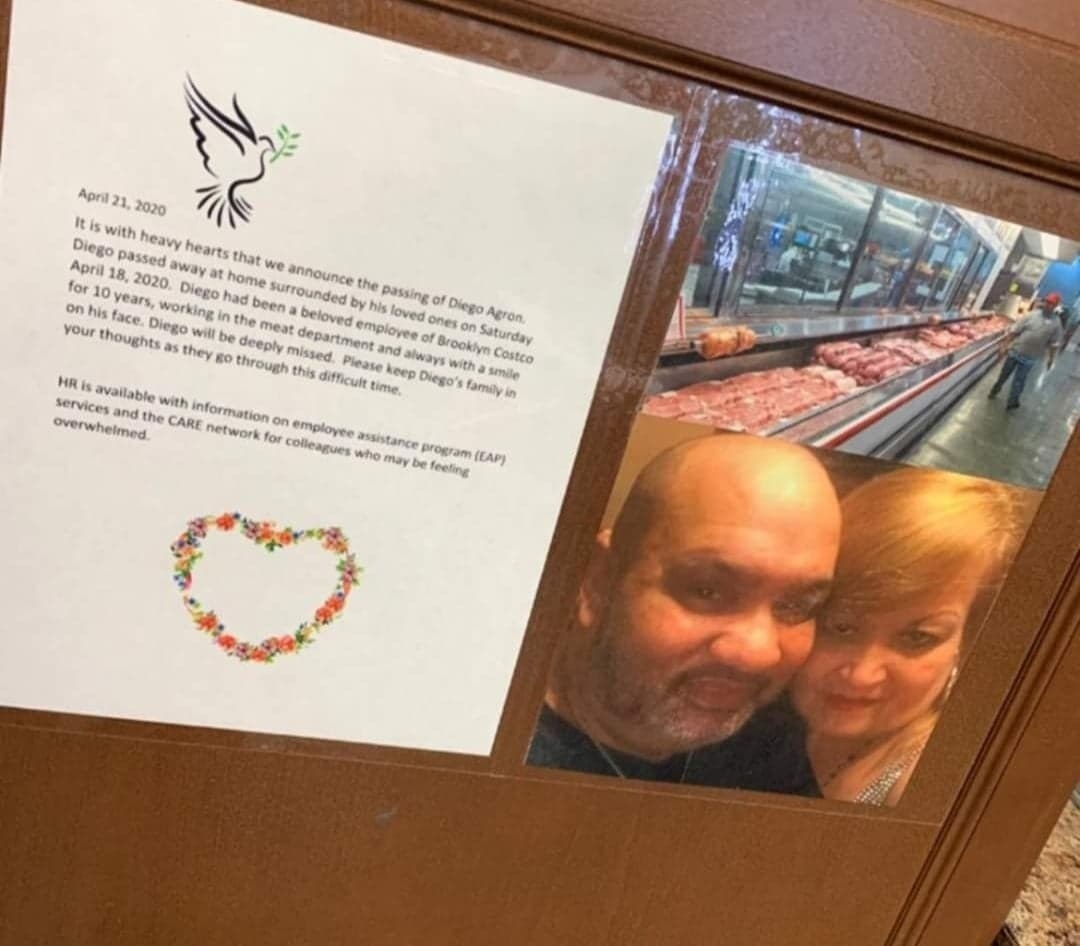 Costco workers are not alone. Food service workers at large corporations like Walmart, Trader Joe’s, and Kroger have also been sounding the alarm over their working conditions and say their stores have failed to follow social distancing rules.

According to recent data from the Occupational Safety and Health Administration (OSHA), grocery store workers filed the second-largest number of coronavirus-related allegations, citing a lack of personal protective equipment, failure to enforce social distancing measures, and inadequate sanitization efforts. Costco workers at three different locations reported to OSHA that their colleagues were sick or displaying symptoms and they were concerned for their own health.

One of the OSHA complaints came from a warehouse in Brooklyn, where four employees told BuzzFeed News that a colleague, Diego Agron Sr., had died after testing positive for COVID-19.

The warehouse told BuzzFeed News it would not comment on the death. But in a notice posted on April 21, the company confirmed that the “beloved” butcher, who had worked at the location for 10 years and always had “a smile on his face,” had died a few days earlier “at home surrounded by his loved ones.” Managers also said Human Resources is “available with information on employee assistance program services and the CARE network for colleagues who may be feeling overwhelmed.”

“He was a quiet, loving soul and a loving husband and a loyal employee,” one of Agron’s colleagues told BuzzFeed News, saying his death was like a “child that lost a close family member.”

“At the end of the day we are more than employees,” he said, “we are family.”