Owner of £975,000 East London flat featured in Luther, Call the Midwife and a Kendall Jenner photoshoot reveals she got notes through the door begging to buy it – but Brexit, storms and now coronavirus stopped her sale

A homeowner has revealed her struggle to sell her flat in one of the most sought-after areas of East London, which has featured in a stream of TV shows and fashion shoots, despite being bombarded with offers for the proprety in the  eight years she’s lived there.

Sally Bett, said the Baxendale Street two-bedroom flat was so prized by production companies and for fashion photoshoots and sought-after by buyers that people woudl drop notes through the letterbox, askig her to get in touch if she ever wanted to sell.

Recently, the house was used as the set of a photoshoot starring model Kendall Jenner. It’s also used as an outdoor filming location for Mr Selfridge, Goodnight Sweetheart, Luther and Call The Midwife.

So, when it came to putting it on the market in search of a bigger home as her family expanded, Sally assumed the two-bedroom properyt would be snapped up at the £975,000 asking price.

But Sally claims uncertainty over Brexit, torrential rain and the coronavirus pandemic all got in the way, adding that it didn’t help when her estate agent went bust in the meantime. 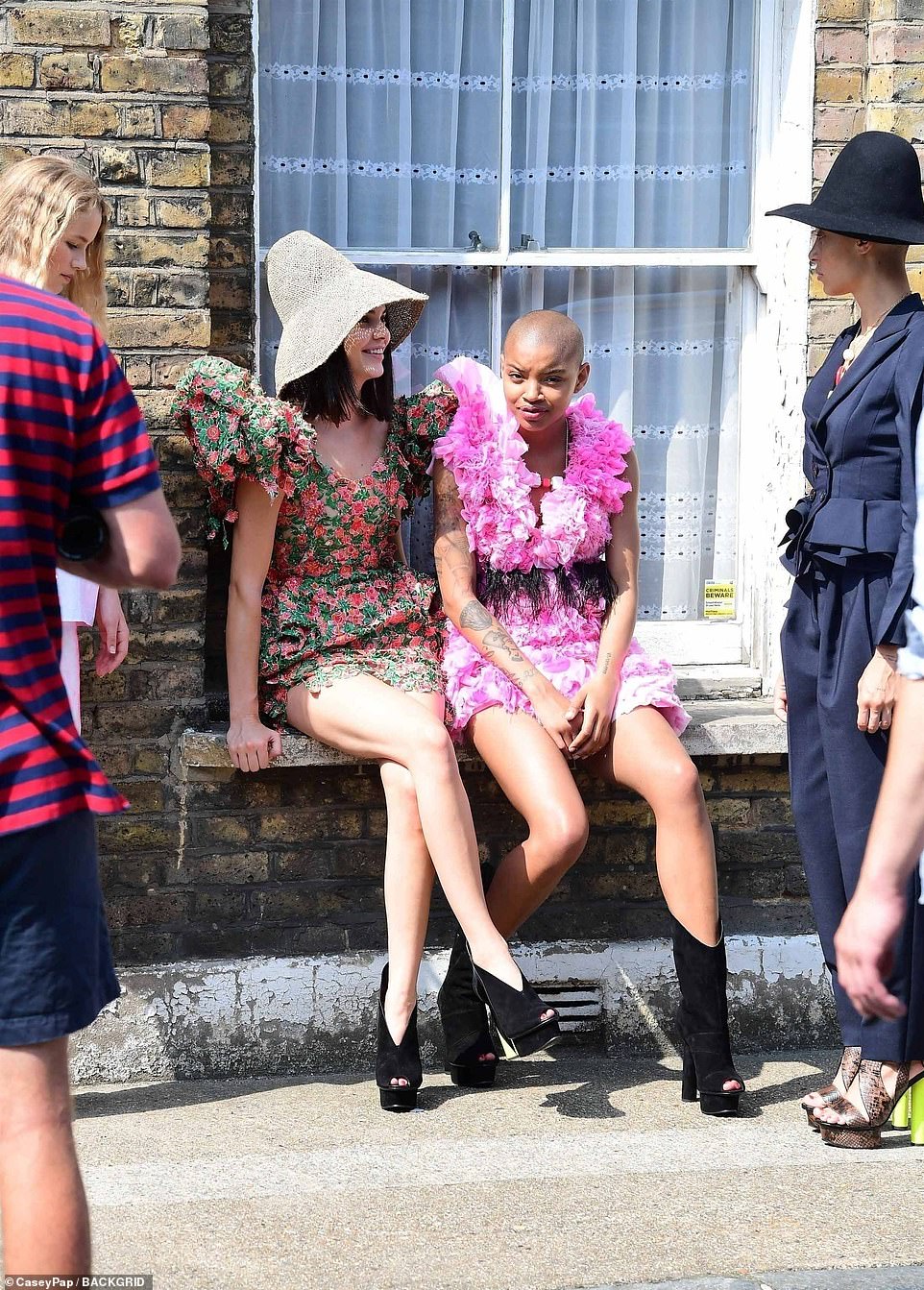 An East London house which was used as a filming set for popular shows like Luther and Call The Midwife as well as fashion shoots is up for sale. Its owner, Sally Bett, said the Baxendale Street two-bedroom flat was so prized by production companies and passers-by that she had received offers to privately sell it in the eight years where she has lived there 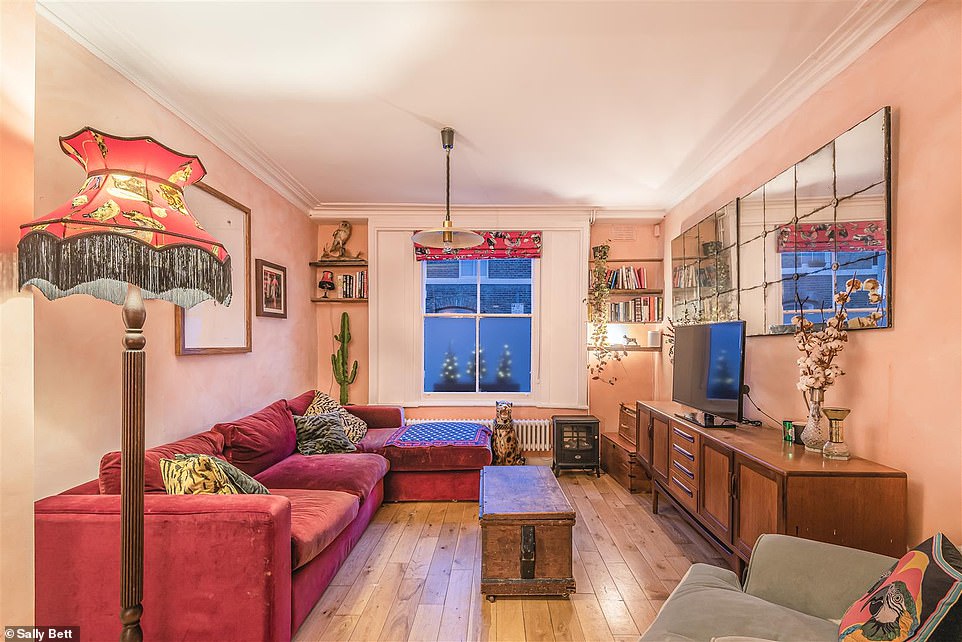 The pretty two-bedroom, which comes with a powder pink living-room flat is for sale at £975,000, located near Colombia Road and the famous Flower Market

The owner of the quirky home said she bought it eight years ago, at a time when similar properties were subject to bidding wars due to their rarity and popularity.

‘They were highly sought after with bidding wars and people putting notes through the doors to beg owners for private sales or the heads up for if one was soon entering the market,’ she explained.

‘You’d have to sign up to estate agents and woo them with muffin baskets so you would get the heads up and first foot through the door when one came available.’

And once she moved in, Sally still received letters from either interested buyers or production companies. 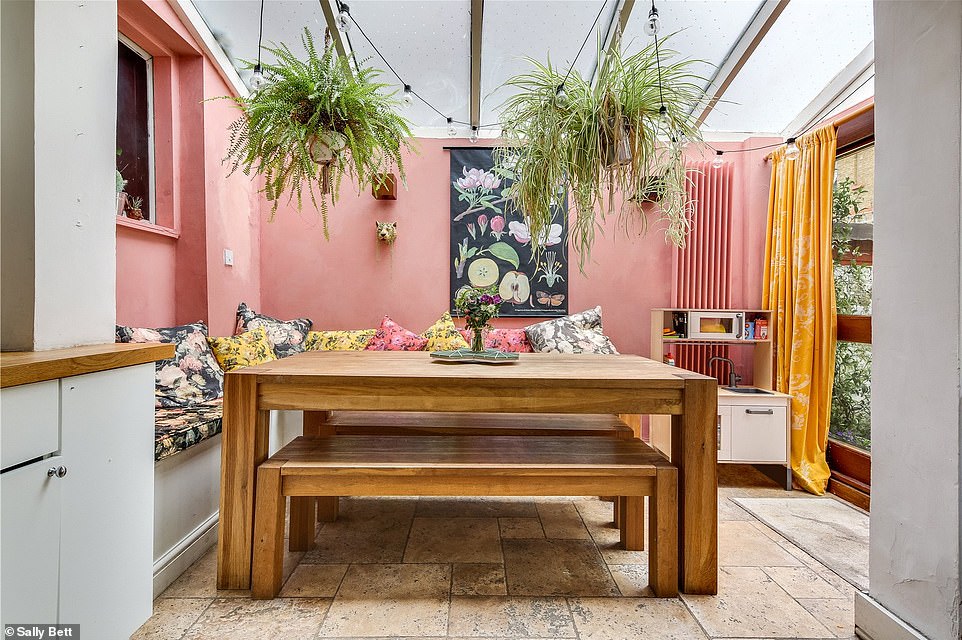 The flat’s kitchen is also pink and luminous. Sally explained similar houses are rare and subject to fierce bidding wars 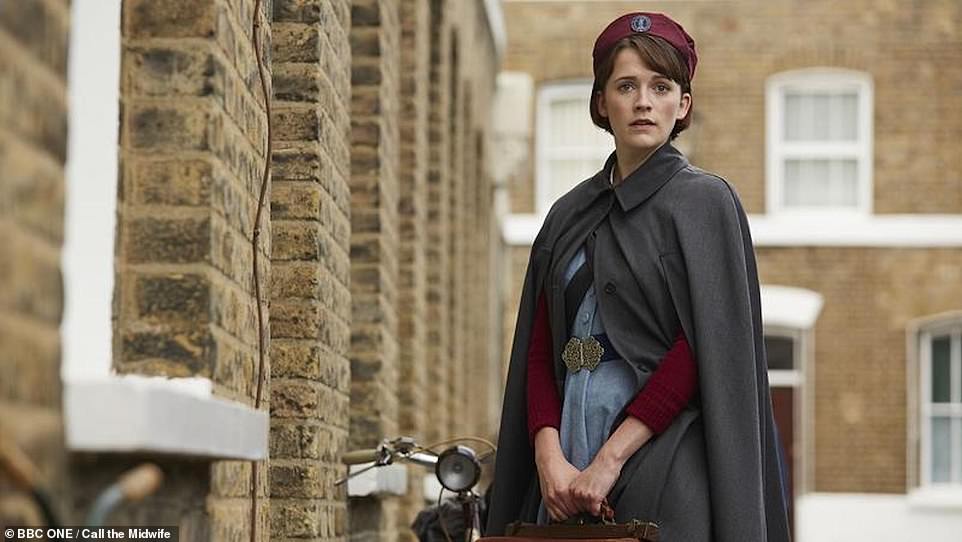 The house was used as a filming location by several locations, including the period drama Call The Midwife (pictured)

‘We all get letters through the doors from production companies asking if we would be happy to let them use our home as a setting, or to give us the heads up that there will be filming in our road and will be a certain amount of disruption,’ she said.

Sally explained the exterior of the house and its pretty door have caught the attention of location scouts.

The period drama Call the Midwife, set in East London, is filmed at studios in Surrey, but used Sally’s door as a film location for a few episodes. 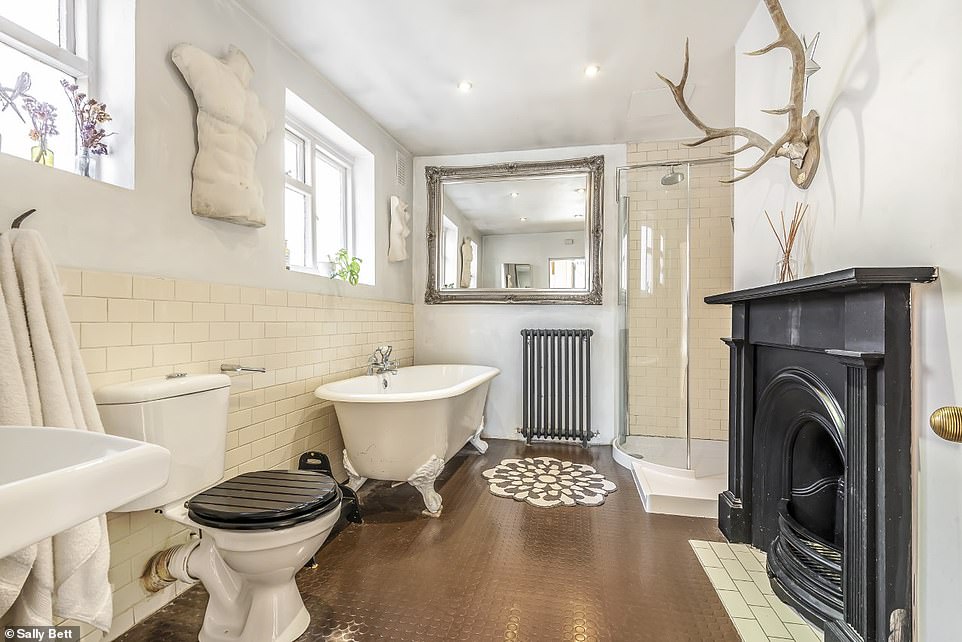 The flat’s impressive bathroom, with a black fireplace and rustic ornaments. Sally said she was buying the apartment due to her expending family

So did TV series such as Luther, starring Idris Elba, Mr Selffridge, as well as the most recent season of Doctor Who starring Jodie Whittaker.

Run, Fat Boy run, with Simon Pegg, was filmed around Sally’s neighbourhood, too, as well as Snatch.

The door was also used in several adverts for UK businesses, including a real estate-centered ad for Barclays.. 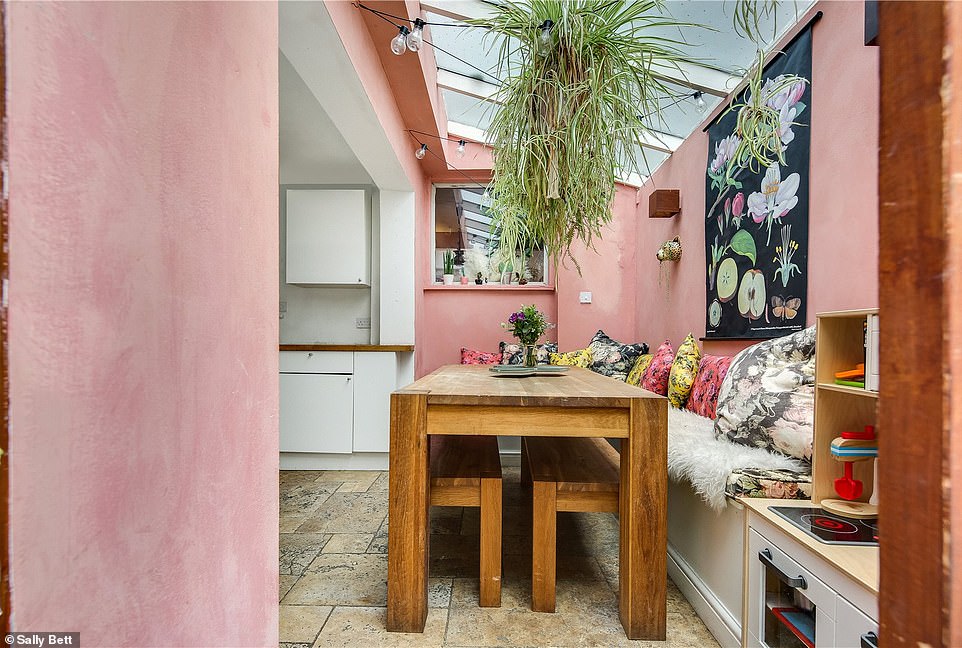 Sally bought the house eight years ago, and said that ever since, she’s received letters from strangers begging her to contact them if she ever sales. Pictured: a sitting booth and wooden tables in the kitchen 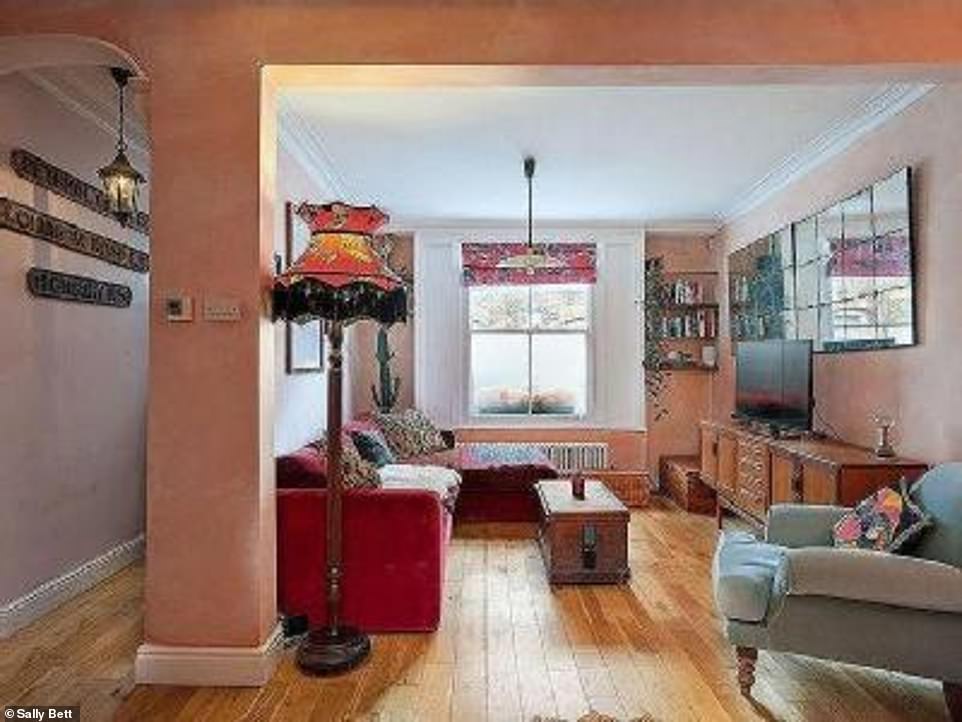 Due to a series of unfortunate disasters, Sally has not been able to sell the flat, after putting it on sale last year. The living-room is decorated with a mix of old glamour and modern elements 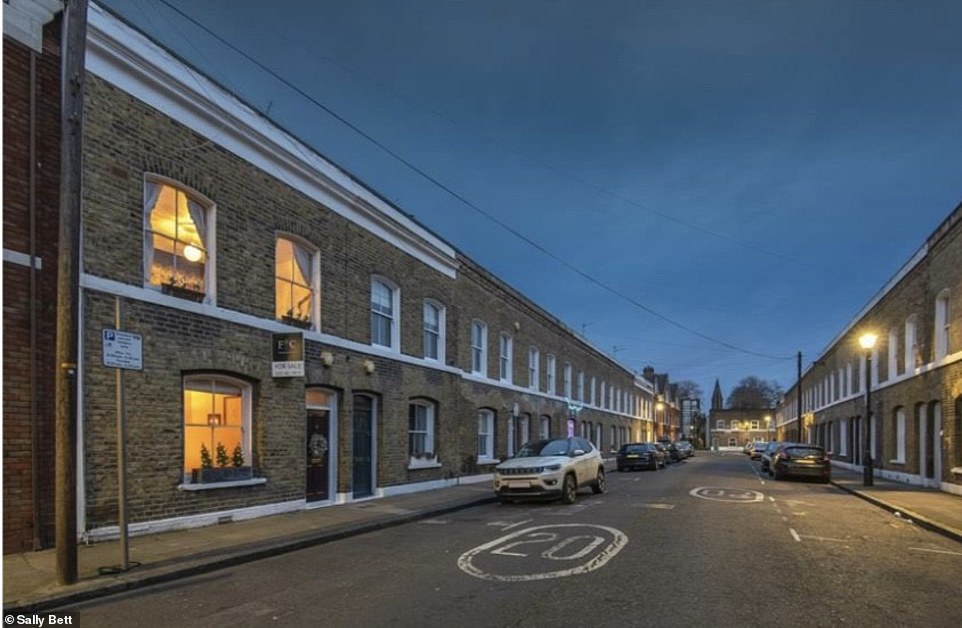 Sally’s street is often the backdrop of adverts or TV shows, like Doctor Who or Run, Fat Boy, Rum, which filmed in the adjacent streets

However, in spite of its popularity with the small and big screen, Sally’s search for a buyer has not been successful thus far, due to a series of disasters affecting the real estate market.

Sally explained the uncertainty surrounding Brexit had prevented her from putting the house onto the market.

The family had to change estate agent after the one that had initially picked closed. They were hopeful to find a buyer in January, but a series of storms hitting the UK led to cancelled viewings.

She said she had eventually found a buyer in March, but their offer was withdrawn at the start of the lockdown, amid the coronavirus crisis, following the government’s recommendation.

Now back to square one, Sally hopes to sell the beautiful property for good once the lockdown is lifted. 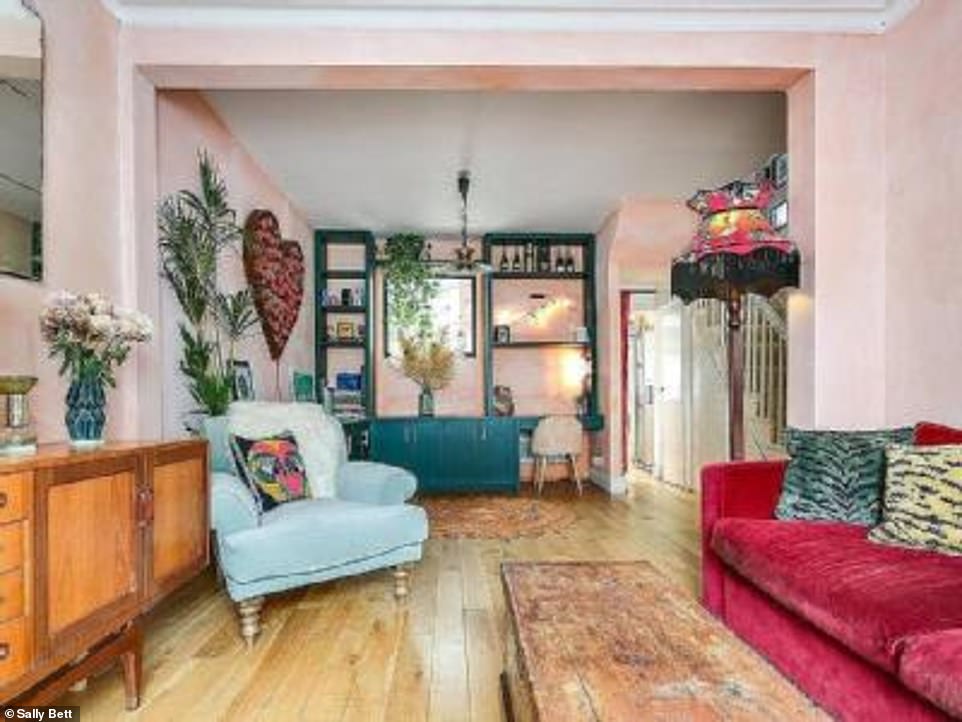 The home-owner explained uncertainty over Brexit prevented her to put the flat and its pink and blue living-room on the market earlier. Le large living-room comes with beautiful wooden floors and velvet furniture 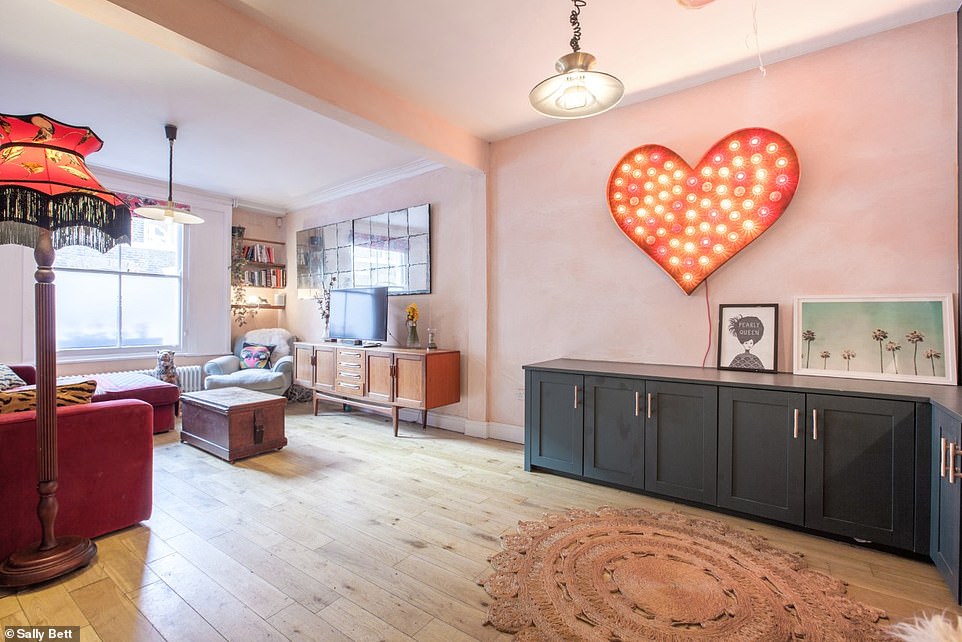 The East London dweller said that she had found a potential buyer, however they withdrew their offer due to the coronavirus. Pictured: the luminous living-room with a heart-shaped lamp 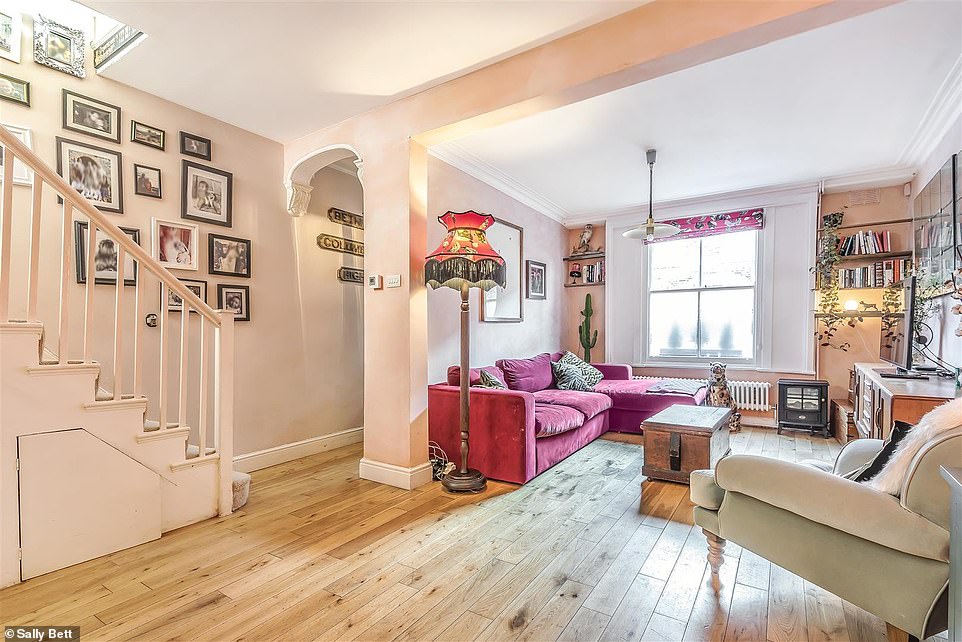 Sally said she hoped to sell the cute apartment, with a large living space, once the Coronavirus pandemic is over and the lockdown is lifted