Medics warned that while all focus was on coronavirus, established and deadly diseases could be gaining a foothold because inoculation programmes have been halted. In England, uptake of the MMR jab fell 20 percent last year after the introduction of lockdown measures, although these numbers later recovered. But across the world a pattern of declining uptake has emerged.

A review co-authored by Professor Carl Heneghan, Director of the Centre for Evidence Based Medicine at the University of Oxford to be published next week (Monday 28 June) shows tens of millions of babies and young children have been put at risk of potentially deadly infections due to the drop in vaccine uptake as well as the suspension of services.

The report – Childhood Vaccination and the Impact of Covid – examined 35 studies comparing the pattern of childhood vaccinations before and during the pandemic.

At least 135 countries across the world reported disruption to vaccine services including Europe, Africa, Asia and America including Latin America and the Caribbean. It found disadvantaged and poorer people were most affected by the drop in services.

Some countries suspended services altogether. In Pakistan 40 million children missed out on polio inoculations after its vaccination campaign was halted due to covid restrictions. In Afghanistan vaccinations were stopped after stocks ran low due to travel bans. Both countries have recently seen rising cases of wild polio.

In other countries, including England, lack of access to services and fear of catching covid were blamed for a fall in childhood vaccine uptake. 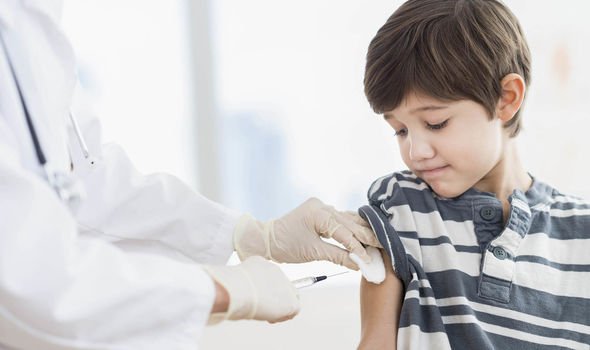 Dr Tom Jefferson, a researcher who co-authored the study said: “People with a high risk of dying are being put at a higher risk of dying because of the covid measures. These vaccines are effective at preventing deadly diseases and once you get below a certain threshold of innoculations there are breakthrough epidemics which can kill children. This is appalling and another unforeseen long term and potentially deadly consequence of lockdown measures. “

He added: “Some of these countries are at war. Many of those affected are very poor. It beggars belief.”

In England the report found poor access to GP services and fear of catching covid were partly to blame for the early fall in uptake during the first three weeks of lockdown. It stated: “Several barriers to vaccination were identified. These included a lack of clarity around whether vaccination services were operating as usual; difficulties in organising vaccination appointments; and fears around contracting COVID-19.”

Professor Jefferson said: “This could lead to deaths. Vaccine services are essential services – like food shopping. It was unacceptable to close supermarkets and it is unacceptable to have a drop in immunisation rates. Some of this can be blamed on poor access to services and some can be blamed on the fact people were told to stay at home and some on the fact people were scared out of their wits by the fear of covid and didn’t want to go to a clinic.”

Prof Heneghan said: “The disruption to life saving vaccines should never be allowed to happen again. We now need a catch up plan for those who we have missed. Where is it? This is one area where we could effectively be spending our resources.”