Oversight of coal and coal seam gas projects’ impact on water resources would be handed to the states under the federal government’s push to cut green tape and speed up environmental assessments.

The water-trigger law was introduced by the Rudd-Gillard government in mid-2013 as a federal backstop to state planning assessments. It requires large-scale coal and CSG developments that could affect groundwater to be evaluated by an independent expert panel, which then provides advice to the federal environment minister. 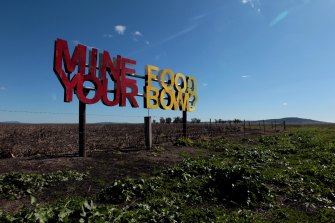 A sign in a farmer’s paddock on the Liverpool Plains, where Shenhua Watermark’s coal project was bought out by the NSW government after the miner failed to submit management plans required under the water trigger. Credit:Dean Sewell

But under the federal government’s proposed one-touch approval system, bilateral agreements would allow state governments to administer Commonwealth environmental laws, including the water trigger, when assessing the environmental impacts of major projects.

The architect of the water trigger, former independent New England MP Tony Windsor, said putting states in charge of responding to advice from the water-trigger experts spelled a return to a “chickens and the fox” scenario.

“The water trigger puts some federal overlay through the [Commonwealth] Environment Protection and Biodiversity Conservation (EPBC) Act,” Mr Windsor said. “Prior to that, state governments which received royalties from granting mining licences also assessed a project’s impacts on water resources.”

Federal Environment Minister Sussan Ley’s proposed law change to set up the bilateral deals is currently stalled in the Senate. She said the federal government would insist any deal included an undertaking that the appropriate state or territory minister would obtain and take account of any relevant advice from the water-trigger experts.

Ms Ley said her bill would enable the federal environment minister to ask the water-trigger panel for supplementary advice, on top of that provided to state governments.

Mr Windsor’s former electorate is home to some of Australia’s best cropping country on the Liverpool Plains in north-western NSW, where BHP Group and Shenhua Watermark proposed and then abandoned an underground and open-cut coal mine, respectively.

Following advice from water-trigger experts, the federal government required Shenhua to develop a plan to demonstrate that mining would not de-water the aquifer that feeds the rich alluvial soils of the plain below the project area.

“Government will never say it, but I know for a fact BHP pulled out for the water issues and the remaining hurdle Shenhua never jumped was to put in an appropriate water management plan,” Mr Windsor said.

Mining companies have been critical of bureaucratic duplication and delays. Last year, when he launched the government’s plan to devolve environment assessments to the states, Prime Minister Scott Morrison said the current process was costing the economy $300 million a year.

Ms Ley has pledged a new federal “assurance commissioner” to oversee state government management of the EPBC Act. But legal experts say limits on the commissioner’s powers would prevent investigations of individual projects and restrict it to assessments of systemic issues across multiple ventures.

Environmental Defenders Office director of policy and law reform Rachel Walmsley said the proposed changes would broadly accredit states to handle assessments under the EPBC Act, but it was unclear how they would be applied to actual projects such as a mine.

The Federal Court ruled last week that the water trigger must be applied to Adani’s Carmichael coal project in Queensland’s Galilee Basin and plans to take 12.5 gigalitres of water a year from the Suttor River. The Australian Conservation Foundation brought the case to court to challenge the federal government’s decision not to apply the water trigger to the project.