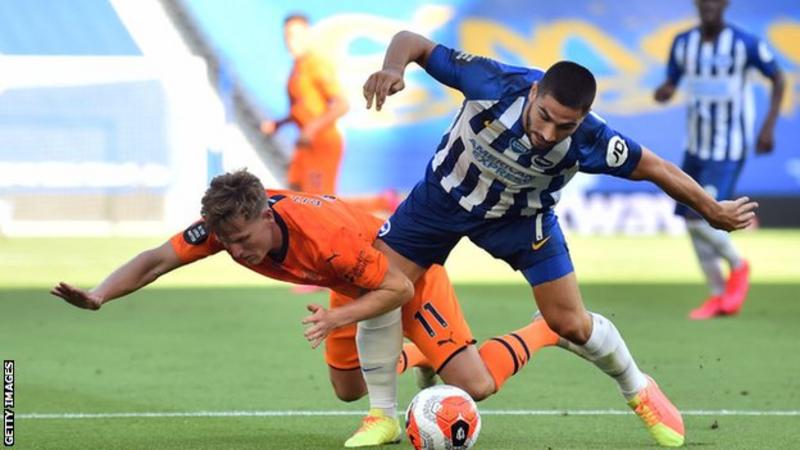 Brighton secured their Premier League status for another season after an uneventful goalless draw against Newcastle at the Amex Stadium.

The Seagulls needed one point to guarantee their survival and they were rarely threatened by the Magpies in both sides’ penultimate game of the season.

Chances at either end came at a premium but Graham Potter’s hosts were unfortunate not to be awarded a penalty in the first half.

Neal Maupay appeared to be brought down by Matt Ritchie but the Frenchman opted to get back to his feet and play on, without appealing for a spot-kick.

In a game that felt more like a pre-season friendly, the visitors’ best chance fell to substitute Andy Carroll, who was unable to guide Jonjo Shelvey’s late corner on target.

Brighton move into 15th place in the table, seven points from the relegation zone, while Newcastle remain 13th.

Premier League survival was always going to be the main objective for Potter when he accepted the Brighton job at the end of last season, and with one game to go, the former Swansea boss has delivered another year in the top flight.

With goal difference in their favour, Brighton’s safety looked all but certain before kick-off despite a tough run of three consecutive home defeats – with only two heavy defeats coupled with two large wins for Aston Villa still threatening Albion’s status.

But the Seagulls’ home form will be a cause of concern for Potter and his staff as they prepare for a short turnaround before the 2020-21 season gets under way.

Only Southampton (18) and relegated Norwich (19) have scored fewer home goals than Brighton (20) this season, and they were limited to just three shots on target against the Magpies.

Maupay is the club’s top goalscorer this term and when Ritchie hesitated in possession inside the Newcastle box, the Frenchman reacted quickly to seize on the loose ball before appearing to be brought down by the defender.

Ritchie lost his footing as he tried to scramble back into position, but no one in blue and white stripes appealed for referee Simon Hooper to point to the spot.

Centre-back Adam Webster also forced Martin Dubravka into an acrobatic save after the break, as he was gifted too much space by the backpedalling Newcastle defence, but Brighton will simply have to score more goals next season if they are to confirm their safety before their final two matches.

Magpies at ease in Sussex sunshine

Newcastle have not won in their last five league games but the Magpies have not been threatened by the relegation trapdoor since beating Sheffield United on their return to action last month.

And with very little riding on their cross-country trip for an outing in the Sussex sunshine, the visitors produced a lacklustre performance.

Bruce, whose side only recorded one shot on target, pointed to his team’s relentless run of matches in recent weeks – and with 10 games in 35 days, he could have a point.

The Magpies could have taken all three points in the final five minutes, but Carroll was unable to end his run of 32 Premier League games without a goal as he nodded wide after meeting Shelvey’s corner at the back post.

Uncertainty looms over Newcastle, with speculation still surrounding a potential takeover, but Bruce will be keen for clarity as he tries to build a team capable of bringing European football back to St James’ Park.

Dan Burn (Brighton and Hove Albion) wins a free kick in the defensive half.

Matt Ritchie (Newcastle United) wins a free kick in the defensive half.

Attempt blocked. Jonjo Shelvey (Newcastle United) right footed shot from the right side of the box is blocked. Assisted by Joelinton.

Nabil Bentaleb (Newcastle United) wins a free kick in the defensive half.

Adam Webster (Brighton and Hove Albion) is shown the yellow card for a bad foul.

Danny Rose (Newcastle United) wins a free kick in the defensive half.

Attempt missed. Andy Carroll (Newcastle United) header from very close range is close, but misses to the left. Assisted by Matt Ritchie with a cross following a corner.