Australia will build at least eight nuclear-powered submarines under a historic new military alliance with the United States and Britain, dumping the troubled $90 billion future submarine deal with France.

The decision has infuriated the French government which has accused Canberra of operating “contrary to the letter and spirit of co-operation that prevailed between France and Australia”. 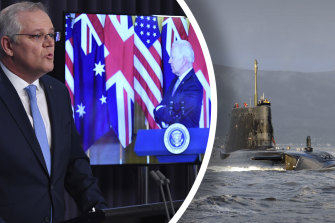 Prime Minister Scott Morrison has signed an historic agreement with the United States and Great Britain.

The move will cost Australian taxpayers billions of dollars because of the work already done by Naval Group and the compensation that will need to be paid to the company.

As part of the pact, to be known as AUKUS, the United States and Britain have agreed to share their nuclear-powered submarine technology for the first time, as the three countries look to project a more powerful posture in the region amid China’s escalating militarisation of the South China Sea.

Prime Minister Scott Morrison said on Thursday morning the new fleet of nuclear submarines would be built in Adelaide and moved to assure Australians the government was “not seeking to establish nuclear weapons or establish a civil nuclear capability”.

The first nuclear submarines will be operational between two and four years later than the deal with French builder Naval Group, meaning they will not be in the water until at least 2036 and as late as 2038. They will cost more than the $90 billion that was projected for the 12 attack-class submarines which would have been conventionally powered.

The construction of the nuclear-powered submarines in Adelaide is not expected to affect any of Australia’s international nuclear non-proliferation agreements. The reactors will arrive in Australia already containing enriched uranium. Using the American technology means it does not have to be refuelled for the life of the submarine unlike other nuclear-powered boats.

Domestic laws governing nuclear power may need to be tweaked for the purposes of building and operating the submarines locally.

The three countries will work out how best to deliver the nuclear-powered submarines over the next 18 months.

The submarines will be built at the Osborne Naval Shipyard in Adelaide, where French company Naval Group was to construct the 12 attack-class submarines.

In a statement French Foreign Minister Jean-Yves Le Drian and Armed Forces Minister Florence Parly said the decision to junk the agreement “marks an absence of coherence that France can only observe and regret”.

“This decision is contrary to the letter and spirit of the co-operation that prevailed between France and Australia,” they said.

Former Labor prime minister Paul Keating said the deal with the US to access their nuclear technology would “witness a further dramatic loss of Australian sovereignty, as material dependency on the United States robbed Australia of any freedom or choice in any engagement Australia may deem appropriate”.

“Australia has had great difficulty in running a bunch of Australian built conventional submarines – imagine the difficulty in moving to sophisticated nuclear submarines, their maintenance and operational complexity,” he said.

“And all this at a time when United States reliability and resolution around its strategic commitments and military engagements are under question.”

The decision to go with nuclear-powered submarines was made on the basis that they are considerably faster and can stay underwater, undetected, for days longer than conventional submarines.

The US has previously only offered its technology to Britain to build nuclear-powered submarines and the new deal has been described as a “one-off”.

“Nuclear-powered submarines do not have the same limitations that face conventional submarines on weapons storage, speed and endurance,” Mr Morrison said.

“They can stay completely submerged for many months, limiting the opportunities for detection by adversaries.”

Labor leader Anthony Albanese, who was briefed on the proposal on Wednesday, has not yet commented on the move.

“It makes Australia less safe, increases the risk of conflict in our region and puts us in the firing line. Greens will fight this tooth and nail,” he said on Twitter.

Marcus Hellyer, a senior analyst with the Australian Strategic Policy Institute, said the development showed “how much the world has changed in five years” and called it the “biggest defence capability story of my lifetime”.

He said nuclear submarines were “better hunters, better at escaping, and can spend much more time on station.”