Premier Daniel Andrews has been secretly grilled by Victoria’s anti-corruption watchdog as part of an investigation that has found the Labor Party’s culture is rotten and encouraged the serious misuse of public resources.

The conclusions of Victoria’s Independent Broad-based Anti-Corruption Commission will shake not only state Labor but the federal opposition, given that several federal Labor MPs and shadow ministers are key players in the factions that IBAC has identified as unethical. 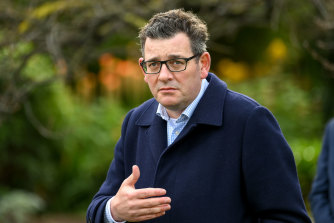 Daniel Andrews was grilled by the inquiry into wrongdoing in Labor.Credit:Eddie Jim

The anti-corruption commission’s interim findings – contained in a draft report of Operation Watts sighted by this masthead – reveal that Andrews is among senior Labor figures to have privately conceded that “significant cultural reform is required within the ALP” to rid the party of a culture that encouraged the misuse of public funds, nepotism and other wrongdoing.

IBAC interviewed 26 witnesses, including the premier, in private and seven witnesses in public hearings. It concluded in its draft report that cultural failings within Victorian Labor were systemic and had been condoned or even encouraged by party leaders for many years.

The report also casts doubt over the adequacy of the initial response to the scandal by federal Labor leader Anthony Albanese, Andrews and Labor’s national executive in 2019 to place the Victorian branch under administration, expel tainted ALP members and to appoint party elders Jenny Macklin and Steve Bracks to investigate the scandal. IBAC recommends that far greater reform is necessary.

The revelation of the IBAC findings and the fact that Mr Andrews was interviewed will surprise some political observers. It was widely expected that IBAC’s inquiry would be limited to determining if disgraced Moderate Labor factional boss Adem Somyurek and his key lieutenants were engaged in corruption or serious misconduct.

That perception had led Somyurek and some journalists at News Corp to accuse IBAC of running a protection racket for the Socialist Left faction of which Andrews and Albanese are members. 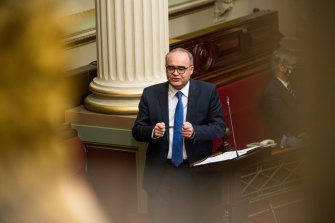 While IBAC found it could not definitely conclude that all Labor’s factions had engaged in the same wrongdoing as Somyurek’s Moderate Labor, the evidence it gathered made it “highly likely the misuse of publicly funded staff” and “employment of family members and factional allies for party or factional purposes and nepotism has occurred for a much longer period and is much more widespread [across Labor] than Moderate Labor”.

“The unethical cultures exposed in Operation Watts are not confined to the [Moderate Labor] faction. These unethical practices are embedded within the [Victorian Labor] branch and are systemic to all of the factions,” the report found.

It also revealed that Andrews had conceded to IBAC that the culture of branch stacking and rule breaking, and a failure to ensure an adequate process for whistleblowers to raise complaints, was unlikely to be limited to Moderate Labor.

“The evidence adduced enables the conclusion that these practices have been approved or condoned by party leadership for decades,” IBAC concludes.

“Leaders must be prepared to expose and denounce such activity regardless of their alignment. Without the rigorous participation of the leaders of the branch, the reforms proposed in this report are unlikely to be effective.”

Somyurek was dumped from state cabinet and the Labor Party, while Marlene Kairouz and Robin Scott resigned from the frontbench, after their faction was implicated in June 2020 by an Age and 60 Minutes investigation into the flagrant abuse of public resources to branch stack.

The exposé prompted Operation Watts, a joint IBAC and Victorian ombudsman probe into allegations Somyurek directed taxpayer-funded ministerial and electorate office staff to disregard their public duties and instead work for him and his faction to sign up fake ALP members.

Branch stacking involves harvesting the votes of non-genuine political party members, including those who haven’t paid their membership dues or may not even know they are a party member, to build power, thus improperly influencing who is nominated to run for state and federal parliaments or for other political positions. This masthead has exposed branch stacking by the ALP and the Liberal Party, although the latter has never been the subject of a law enforcement or anti-corruption agency probe.

The IBAC findings are only interim because the watchdog is yet to give accused parties a final opportunity to rebut allegations prior to the report’s tabling in parliament. However, the draft report is likely to closely reflect the final report given it was written after many months of investigation and after key suspects and witnesses were grilled for days under oath, including at public hearings last year. 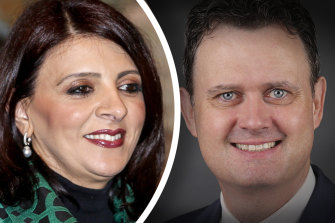 IBAC’s report finds the “widespread” and “co-ordinated” practice of misusing ministerial and electorate office staff to promote the Moderate Labor faction was “not limited to one faction”.

“Operation Watts found a political culture, condoned or even actively encouraged by senior figures, of ends justifying means and of bending and breaking rules,” IBAC concludes.

In its report, IBAC states that the Labor Party’s “unethical culture with respect to factional activity” arose constantly during its investigation, “whether as an explanation or excuse for such conduct”.

“Many MPs examined by the investigation, including Daniel Andrews, the premier and leader of the parliamentary Labor Party, acknowledged that significant cultural reform is required within the ALP,” IBAC wrote.

“Effective reform of these unethical practices depends on leadership creating an environment of expectation among their subordinates that their task is to discharge their public duties, that undertaking factional or party political work within their role is prohibited, and that unethical practices will be exposed and eradicated.”

The IBAC report also raises serious questions about whether recent reforms adopted by the ALP will stop branch stacking and other misconduct. It said Labor’s “organisational and leadership culture” must undergo further change if necessary reforms to stamp out corruption are to be effective.

In a further sting to the Andrews government, the anti-corruption agency found that despite the so-called “red shirts” scandal exposing similar rorting in the state ALP and prompting legislative reforms in 2018, poor behaviour within the party “continued unabated”.

Operation Watts also details how ALP staff had no faith that they could alert the premier’s office about suspected misconduct, even though some of the rorting involved ministerial staff appointed by the premier.

“Several staff testified they did not consider complaining to the premier’s office because it had little direct power over the running of a ministerial office, they were not confident their claims would be dealt with on merit, and they were fearful of repercussions against them if they were to complain,” the report states.

The investigation uncovered evidence that money raised at fundraising events attended by state and federal Labor MPs was siphoned off to pay for fake ALP memberships as part of the branch-stacking operation. IBAC also concludes that jobs in state and federal MPs’ offices in Victoria were handed to factional operatives or their relatives in the knowledge they would not be required to show up to work.

“Evidence found that many of these employees did not perform their public duties either because their role had been given to them as a sinecure or because they were performing factional tasks instead of their public duties. As such, constituents were deprived of the support and services that should have been available to them.”

While backing Somyurek’s public claims that branch stacking occurred in other factions, Operation Watts also presents a devastating portrait of the disgraced former minister. It reveals that even those once loyal to Somyurek were unwilling to back up his attempts to shift blame for his wrongdoing to his subordinates or other MPs.

Rather, it found Somyurek, backed by Kairouz and other senior figures within his faction, was the principal architect of a scheme that involved serious misconduct, the serious misuse of public resources, ghost jobs gifted to friends, factional allies and relatives and a culture that permitted the widespread forgery of members’ signatures.

Robin Scott accepted his own seniority within the faction, the IBAC report stated, and described Somyurek as “the most important leader” in the faction.

The abuse of taxpayer-funded staff by Somyurek and his allies was unambiguously wrong, IBAC found, despite attempts by Somyurek to claim he was merely operating in a grey area of political standards. IBAC also said some of his former staff and close allies had accused him of bullying them to act unethically and that the faction had exploited ethnic communities for political power.

IBAC also found ALP members’ private information, including information about their religious, cultural and political views, was not adequately safeguarded by Labor’s Victorian headquarters; the information was routinely handed to party operatives.