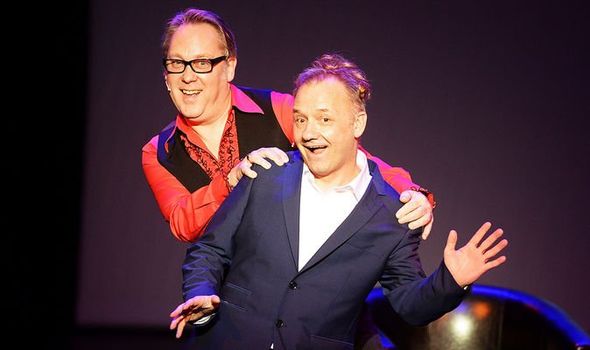 Bob’s exuberantly surreal true stories of his younger days give the impression of a popular chap enjoying mischief and mayhem with a gang of loyal friends but, as he explains in his fascinating and often poignant memoir, Vic Reeves rescued him from a life of crushing loneliness when Bob was 25.

His father had died in a car accident when Bob was seven and, from that day on, his focus was on making his beloved mother happy.

His schooldays were dogged by crippling shyness and his dreams were shattered as a teen when he was rejected by Middlesbrough FC.

His university days were the loneliest of his life and he suffered from depression for five years.

This is, of course, no misery memoir as Bob’s account of tough times is punctuated with comic escapades. But he comes across as such a genial, humble and good-natured man that his low self-esteem seems especially misplaced.

Part two opens in 1988 with Bob living in a hostel for the homeless in London, working as a Legal Aid solicitor and feeling demoralised by the difficulty of making a difference to people in need.

Then Alan, an old acquaintance from Middlesbrough, knocked on Bob’s door and invited him to watch a friend performing above a nearby pub. Bob reluctantly went along because it was the only social contact on his horizon.

The show was Vic Reeves’ Big Night Out. Bob was bowled over. He and Vic were introduced after the show and Bob started going to see him perform regularly, drinking afterwards with Alan, Vic and their friends.

When the show transferred to a larger venue, Vic asked Bob to come on stage to present him with a cheque.

From there, Bob slowly became more and more involved in performing and writing, and the show went from strength to strength before being commissioned by Channel 4 in 1990.

Bob ditched the day job and embraced his new-found rock ‘n’ roll status, hobnobbing with the likes of Jarvis Cocker and Liam Gallagher.

He invited Groucho Club drinking buddies to appear on their most popular show Shooting Stars and went on to make a series of well-loved shows with Vic, from Catterick to House Of Fools.

But he happily left the showbiz life behind after meeting his partner Lisa and becoming a father of two.

Open heart surgery in 2015 was clearly a defining experience but survival gave Bob a new lease of life.

Filming Gone Fishing with Paul Whitehouse, now into its fourth series, helped him find his own voice in front of the camera.

He ends by pleading with readers to take “a quiet one” under their wing and encourage them to shine.

We owe Vic a debt of gratitude for leading the inimitable Bob Mortimer into the spotlight.