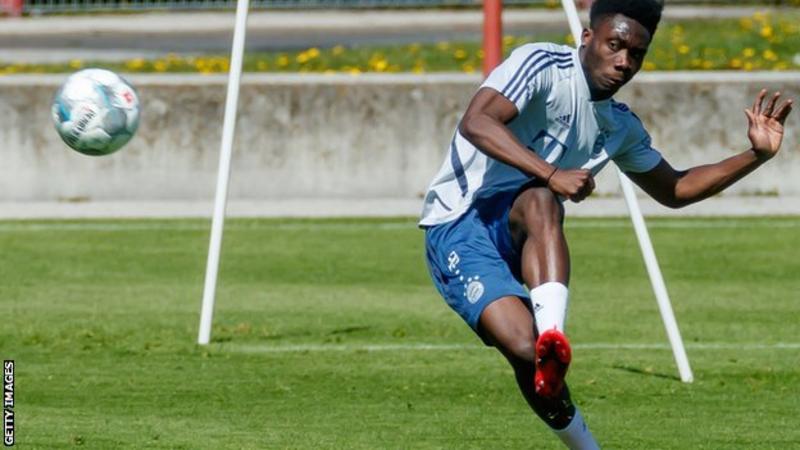 With all of Europe’s major football leagues suspended because of the coronavirus, all eyes are on the German Bundesliga, which could be the first to return to action.

Alphonso Davies and his Bayern Munich team-mates are back in training – although done with a certain amount of distancing – with the German Football League (DFL) saying it is ready to restart on 9 May behind closed doors.

Davies, who has made a name for himself with marauding performances at left-back in the Champions League for Bayern – most notably in the last-16 dismantling of Chelsea – and for his larger than life social media presence, has been discussing the return of football and life as a TikTok star.

Germany’s top two divisions consist of 18 teams each and most of those have played 25 games. Bayern are five points clear at the top of the Bundesliga.

Any resumption will need the approval of the German government, whose response to the pandemic has involved an intense programme of consistent testing from early on.

Most players have started training again, with Bayern returning to their training ground on 6 April under strict conditions, training in small groups and keeping at a distance at all times.

“Trying to resume matches on the 9th, I think that’s their way of saying they know the players are safe,” said 19-year-old Canada international Davies.

“They know that everyone is going to be safe on the field.

“Coming back to the first training session, it was like going back to school again.

“Being inside for almost two weeks and not seeing anyone – just seeing them on video – it was good to see everyone again, run around and kick a ball.

“We start training about 10:15 in individual groups of about six. We do our assignments for that day. We don’t high five or fist pump each other – we try to keep a safe distance.

“We don’t have set-pieces. We are just getting back our touches and fitness, some passing, some shooting, some running. It keeps us in shape.

“It keeps us getting ready for when they say if we’re going to play or not. As of now, we’re just trying to keep fit.

“We get the training done, go home, shower and stay at home”

Davies, who joined Bayern from Vancouver Whitecaps in 2018, has made 31 appearances for them this season.

He was one of his side’s most impressive performers in the 3-0 win at Chelsea in the first leg of their Champions League last-16 tie and signed a new deal until 2025 earlier this month.

He has also been a revelation on social media through his TikTok account (a clip of him re-enacting a scene from comedy show Brooklyn 99 has proven particulary popular) and says he wants to be an actor when he retires, with Idris Elba and The Rock (Dwayne Johnson) two of his favourite stars of the screen.

“I post on social media for the fans to get to know me and a different side of football,” he said.

“My team-mates enjoy it. There’s a little bit of joking here and there but, overall, they don’t mind me doing the TikTok as long as I perform on the field.

“A couple of players have TikTok now – I think I’ve inspired them to get it. The first person that comes to mind is Robert Lewandowski – I think I inspired him to get it but I’m not sure, maybe he got inspiration from somewhere else.

“I try to take funny experiences in my personal life to twist it into a funny way to express myself.”

He added: “Being an actor, I mean it’s not really my goal right now but if it happens, it happens. You can always dream about being something else.”