Save articles for later

Add articles to your saved list and come back to them any time.

The Productivity Commission found there was little evidence of the effectiveness of $35 billion of annual funding for Indigenous affairs across health, education and welfare and called for a step-by-step guide for assessing whether money had been well spent. 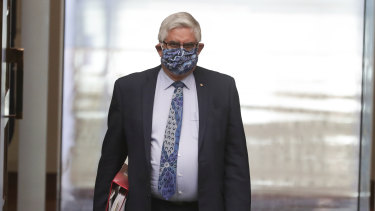 Minister for Indigenous Australians Ken Wyatt says monitoring the effectiveness of programs and understanding what is working is essential to informing policy development.Credit:Alex Ellinghausen

Mr Wyatt, who has overseen the overhaul of Closing The Gap targets – the nation's attempt to bridge disadvantage between Indigenous and non-Indigenous Australians – said the government would consider the report.

The commission said many programs were developed without adequate consultation with Aboriginal and Torres Strait Islander communities and efforts to find out if they had been effective were "ad hoc" or afterthoughts.

It recommended an Indigenous evaluation council as a "credible, useful, ethical and transparent" part of a new government-wide approach.

"For decades, there have been calls to better understand how policies and programs are affecting Aboriginal and Torres Strait Islander people. But the reality is that evidence about what works and why remains thin," the report said.

"Evaluation can play an important role filling this gap but regrettably it is often an afterthought and of poor quality," she said. "Importantly, Aboriginal and Torres Strait Islander people are rarely asked about what or how to evaluate, or what evaluation results mean."

Victorian Aboriginal Community Controlled Health Organisation said the development of such a strategy was an opportunity to set minimum standards specific to the evaluation of Indigenous policies and programs.

"These minimum standards must address a lack of research that interrogates systemic inequalities, culturally unsafe evaluations, colonising research processes and evaluation findings that fail to be adopted by government," it said.

In its submission to the report, Noel Pearson's Cape York Institute told the commission a clear recognition of "the deep problems" in the current approach was critical.

"All reform of the current system will only be as effective as far as the problems at the heart of the current system are addressed, so that the very substantial public policy spending can become a far more cohesive attempt at addressing entrenched disadvantage, one that includes Indigenous people whose lives and futures are at stake at the very centre."

Commission chairman Michael Brennan said better outcomes would be achieved if the values, expertise and lived experiences of Aboriginal and Torres Strait Islander people were reflected in what was evaluated, how evaluation was undertaken, and the outcomes policies and programs sought to achieve.

The strategy did not endorse particular evaluation approaches or methods but acknowledged that different evaluation questions and contexts would require different approaches.

Mr Wyatt said monitoring the effectiveness of programs and understanding what was working and what needed adjustment were essential to informing policy development and supporting robust decision making.

"The report suggests a number of changes designed to enhance the quality of Indigenous evaluations, some of which require consideration and consultation across government and other parties," Mr Wyatt said.

The most important news, analysis and insights delivered to your inbox at the start and end of each day. Sign up to The Sydney Morning Herald’s newsletter here and The Age’s newsletter here.