Five years ago, Barry Bowman’s daughter brought him a box of his belongings that his ex-wife thought he might want to keep. The retired DJ went fishing through it, shuffling through old airchecks on cassettes and reel-to-reel tapes. “I jokingly said, ‘I wonder if that old Joni Mitchell tape is in there — wouldn’t that be something?’” Bowman tells Rolling Stone from his home in Victoria, British Columbia. “I swear I spotted it right then. There was no doubt. When I saw that old, weathered label on there, everything came back to me at that very moment.”

Bowman flashed back to the summer of 1963, when he was an all-night DJ at CFQC 600, a radio station in Saskatoon, Saskatchewan. The 18-year-old was residing in a gigantic 1940s-style home downtown on 4th Avenue, with others who became his friends: Ed Hamm, Morris Postnikoff, and Danny Evanishen. They soon befriended a 19-year-old art student named Joni Anderson, later to be known as Joni Mitchell.

“Danny used to always refer to that period as the summer that Joni came to us,” Bowman says. The group would often meet up at the old house, the local swimming pool, or the Saskatchewan River, where they drank beer and ate hot dogs. Mitchell was living with her parents at the time, playing in coffeehouses. Everywhere she went, she was seen with her nylon-string baritone ukulele. “One day, Danny lent his guitar to Joni to try instead of the ukulele,” Bowman recalls. “In no time at all, a couple of weeks, she was even better than all three of those guys put together.”

That summer, Bowman invited Mitchell down to the station to record an audition tape. Sitting on a stool in front of a microphone, she laid down nine traditional folk songs over the course of two evenings: “House of the Rising Sun,” “Tell Old Bill,” “Fare Thee Well (Dink’s Song),” and others. “I gave her copies, kept the masters, and we went back to partying,” Bowman says. As the summer came to an end, the group drifted apart, with Mitchell going off to the Alberta College of Art in Calgary.

Bowman and Mitchell corresponded in 1967, when she sent him a single of George Hamilton IV covering “Urge for Going” and asked him to spin it at CFAX 1070 in British Columbia, where he was working by then. Eventually, though, they lost contact, and Bowman realized he had lost the tapes. “I let that go eventually,” he says. “It didn’t stop me from tossing the story into conversations from time to time about Joni Mitchell, but that was about it.”

The unearthed tape that Bowman found, simply labeled “Joni Anderson Audition,” is Mitchell’s earliest known recording. It’s included in Joni Mitchell Archives Vol. 1: The Early Years (1963-1967), the first volume of her new archive series. It features five discs containing more than six hours of home, live, and radio recordings leading up to her 1968 debut, Song to a Seagull. The collection features 29 previously unreleased songs — some have circulated on bootlegs, but many have been unheard until now.

“People are going to hear how amazing she was out of the gate,” says Rhino Records’ Patrick Milligan, who co-produced the box set with Mitchell. “When you hear these early recordings, even though she’s not writing yet, her singing, her playing, her interpretation, her phrasing is just completely spot-on. There’s rarely a bad note. She’s so great at what she does. I think the thing that’s really going to be exciting for people is all of her early songs that nobody’s ever heard. Because there are a lot of them.”

Among the unreleased songs is Mitchell’s first original composition from 1965, “Day After Day,” the mystical “Eastern Rain,” and a cover of Neil Young’s “Sugar Mountain,” which famously inspired “The Circle Game.” (Coincidentally, Young’s upcoming Archives Volume 2: 1972-1976 features Mitchell singing “Raised on Robbery” during the Tonight’s the Night sessions).

The Early Years is dedicated to the late Elliot Roberts, Young and Mitchell’s manager who died last year in the middle of the project. “He was very instrumental in getting this whole thing off the ground,” Milligan says. “I started going through all this stuff and trying to figure out the best way to present this material. Looking at the standard, somewhat tired way of releasing albums with bonus material, that seems not really right for her albums. The Neil Young Archives was something that Elliott was very involved with and really liked that model. He was very supportive of doing something similar with Joni.”

Milligan visited Mitchell’s house in Los Angeles several times to plan the release, and sent her CDs of the material. When the pandemic hit, they resorted to video conferences and phone calls. The collection has allowed Mitchell to reconnect with her early work, which wasn’t always her favorite. “In the past, she’s always pooh-poohed her earlier material,” Milligan says. “For to hear this again, she’s kind of like, ‘This stuff’s actually pretty good! Even though I always push it off, I was a folk singer for a while, at least.’ I’m really proud to have gained her trust, which I think we all know is not that easy of a thing to do.”

The liner notes of the box set include an interview with Cameron Crowe, who first profiled Mitchell in a 1979 Rolling Stone cover story. Mitchell rarely gives interviews, especially since she suffered an aneurysm in 2015, which she compared to contracting polio as a child. “I came back from polio, so here I am again, and struggling back,” she told Crowe. “Polio didn’t grab me like that, but the aneurysm took away a lot more, really. Took away my speech and my ability to walk. I got my speech back quickly, but the walking I’m still struggling with. But I mean, I’m a fighter. I’ve got Irish blood!” 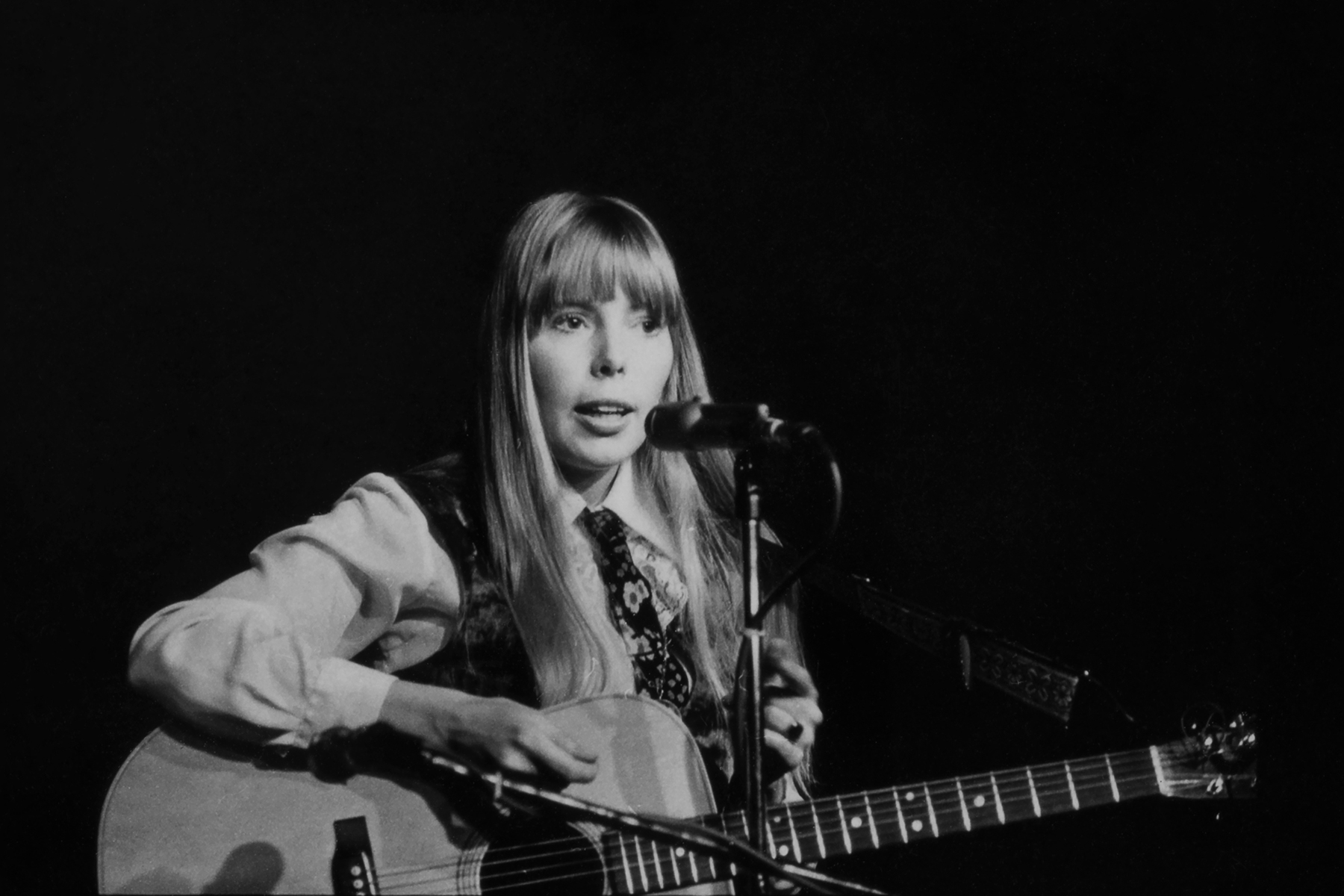 The Early Years also contains two sets from the Canterbury House in Ann Arbor, Michigan, in 1967. The Canterbury was a student ministry of the Episcopal Church that served as a soup kitchen, informal study hall, and music venue. Mitchell, Young, Dave Van Ronk, Odetta, Tim Buckley, and more performed there in the mid-to-late Sixties. “It was built around the idea that the sacred and the secular are the same thing, and it’s our problem that we tend to separate it,” says Bob Franke, a musician at the University of Michigan who became the Canterbury’s doorman in 1965.

Franke’s review of Mitchell’s show from The Michigan Daily is also included in the box set. “She’s too hard to put in one bag (acoustical pop? — her expression) but I would say that she writes songs like Bob Dylan would have if he hadn’t gotten turned off, and if he were a woman, and if he were Canadian,” he wrote. Franke remembers meeting Mitchell after she read the review. “It was what she needed to hear at the time and I’m very glad of that,” he tells Rolling Stone. “She asked if she could meet me. The coffeehouse was being run by my friends, so I just walked downstairs and she gave me a big hug. It was a whole world that was unfolding at that point, [and] it was a great privilege to be a part of it.”

It’s remarkable to hear the Canterbury set, where Mitchell talks to the audience in between songs while tuning her guitar, almost like stand-up comedy. She asks for a coke, speaks in accents, and tells them about watching D.A. Pennebaker’s Don’t Look Back (“David Blue is sort of this Dylan imitator except he won’t admit it,” she tells the crowd. “Don’t ever say I said that!”). “It cracks me up, because when you hear her crack herself up, she’s kind of corny,” Milligan says. “It just makes her really human.”

In addition to the five-CD collection, Bowman’s 1963 session and the Canterbury House sets have also been released as individual LPs. After years of trying to contact Mitchell, Bowman flew down to Los Angeles in 2018 to return the tapes to her — their first time seeing each other in more than 50 years. He never expected her to release the tapes.

“It’s a nice ending to the reunion,” he says. “The fact that we were even talking together was enough for me. For any other chapter of that story to ever occur to my brain … I never even would have thought about it. Those are the great memories that I’ll hold forever, and I’m sure there’s more excitement to come when we finally get a chance to see the hard copy and hold it in our hands.”