London’s Buckingham Palace is quite the impressive abode. It features “19 State rooms, 52 Royal and guest bedrooms, 188 staff bedrooms, 92 offices, and 78 bathrooms,” according to the official website of the royal family. And, believe it or not, it’s not Queen Elizabeth’s only home! Over the years, the queen and her husband, Prince Philip, lived in the private quarters of the palace, but, since the quarantine required by the coronavirus pandemic ensued, the two had been calling Windsor Castle home. When Philip died in April, the Daily Mail reported that the queen would live out her days at Windsor Castle, and that she was “unlikely” to spend “another night” at Buckingham Palace.

Nevertheless, the queen has traveled to London, about a 45-minute drive from Windsor, for various occasions, and may continue to do so. On June 23, the queen met with Prime Minister Boris Johnson at the palace, according to Us Weekly. Photos from their meeting have been shared online, and some royal watchers were quick to spot one thing in particular amongst the queen’s personal possessions. Keep reading to find out what the queen has on display at the palace. 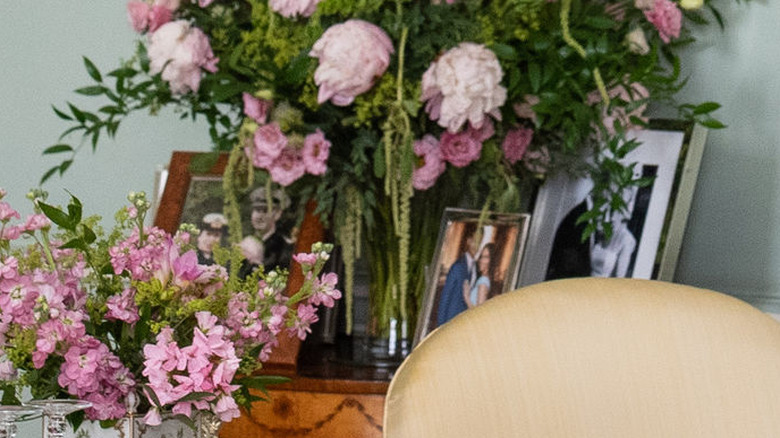 Queen Elizabeth met with Boris Johnson in a room that featured mint green walls, white moulding, and a large fireplace. As the queen and Johnson were photographed standing in front of two gold chairs, several decorative items were visible. There appeared to be some small tables off to the queen’s side that featured vases filled with pink flowers and picture frames of various members of the royal family. If you look closely, you can clearly make out a photo of Prince William and Kate Middleton take back when they got engaged in 2010, according to Us Weekly.

If you really zoom in on the tables, however, you will see that the queen has a photo of Prince Harry and Meghan Markle on display as well. The picture appears to be one that was taken for the Duke and Duchess of Sussex’s engagement. Harry can be seen in his blue suit, while Meghan cozies up to him, with one hand resting on his chest. It seems that despite the tough waters that Harry has been navigating lately, his grandmother still loves him very much, and cherishes him and Meghan as a part of the family.

This seems to be the underlying message whenever the palace releases a statement about Meghan and Harry. In February, for example, the palace ensured the two would “remain much loved members of the family,” according to the Wall Street Journal.