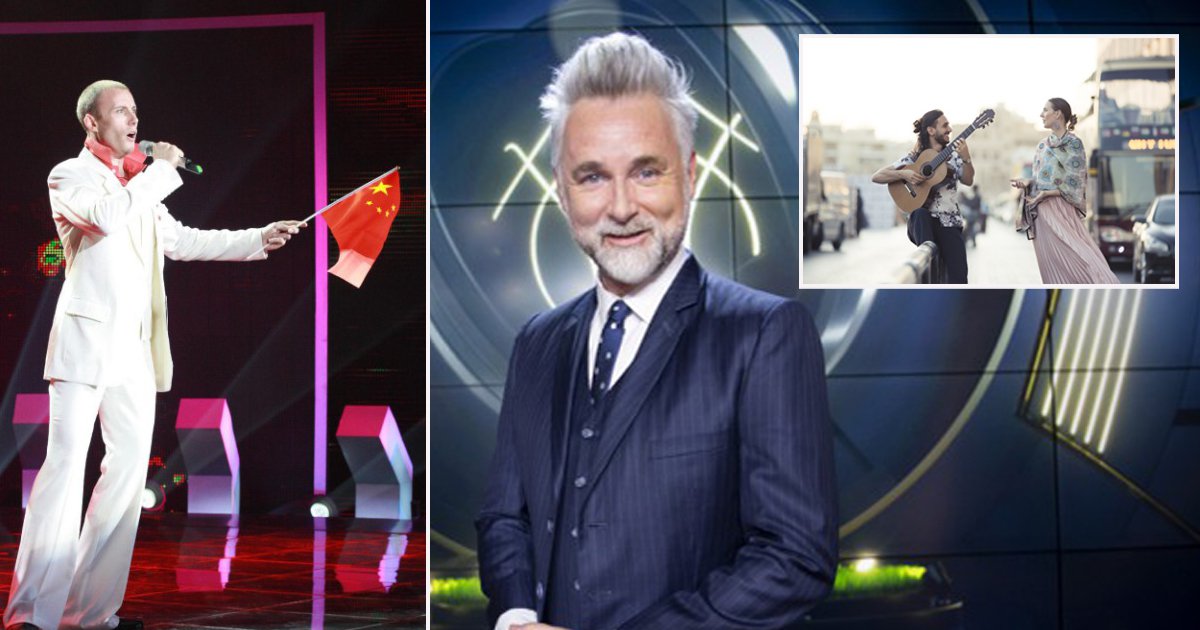 The ‘secret celebrities’ who have found fame by leaving the UK have spoken about their surprise stardom in far-flung countries.

From presenting to singing, the famous faces would go totally unrecognised in the street in Britain.

However they have legions of fans further afield in China, Pakistan and France.

Darren Tulett, a sports presenter, comes from West Sussex but after moving to France, without being able to speak a word of French, he found his calling.

He first went to the country in 1998 to cover the World Cup and has never looked back, now fronting national TV programme Champions Arena – the French equivalent to Match of the Day.

Darren, 55, confesses he never went to France intending to find fame on telly, and still finds it ‘a bit odd when people recognise me in the street.’

‘I’ll notice someone giving me a funny look, then they’ll come up to ask for a photo’ he added.

‘I didn’t move to Paris in search of a TV career, but I think part of what helped me was that, rather than being held back by being English, I leaned into it – although my French is a lot better these days,’ he told PA.

He is now married with two daughters who speak both French and English.

Tanya Wells lives a totally anonymous life when she visits her family in Wandsworth, south west london, a far cry from the stardom she enjoys in Pakistan for her singing.

The 33-year-old is known for her spiritual music which she performs with 36-year-old husband Paulo Vinicius in the band Seven Eyes.

Formed in 2015 the couple are both passionate about mixing-up cultural influences and singing in different languages.

Tanya found fame after one of the band’s songs in Urdu unexpectedly went viral, making them overnight stars in the South Asian country.

‘The intention was never to become famous,’ she said. ‘The song was on the internet for two years before, one day, in 2017 it just went viral. I have no idea how it happened, but people in Pakistan started taking notice.’

‘Suddenly, we had this huge fanbase there.’

Travelling to Pakistan in 2017 for a concert, Tanya was stunned when 1,000 people turned up just to watch her sound check.

She said: ‘That was our first taste of real fame. It’s bizarre, but the country just connected with our performances. I think they appreciate the fact that we’re Westerners paying respect to their heritage and music.

‘My schooling means our band was inspired by Indian music, but we’ve evolved it to include other cultures too.’

She does get recognised in London occasionally, however, and has been stopped in the street by British Pakistani people who know her music.

In a distant corner of the world, 5,000 miles from his Cardiff homeland, Welshman Iain Inglis, 43, was propelled to overnight fame after reaching the semi-finals of the 2012 China’s Got Talent competition.

He only auditioned for the reality TV show as a joke, but soon found himself being mobbed by enthusiastic fans while doing his weekly shop.

Moving to Japan in 2002 to become an English teacher, Iain met his wife, Yu Yanling, now 36, and moved with her back to her home country of China in 2004.

Saying he struggled to learn the language at first, Ian added that he entered the talent show ‘for a bit of a laugh’ but was stunned by the reaction when he sang traditional Chinese songs.

Passionately performing Chinese Communist revolutionary anthems, while wearing a Red Army uniform, the foreign audience lapped it up, voting Iain through to the live shows.

His novelty performances made Iain a wild card favourite and he made it all the way through to the semi-finals before being axed. However the singer’s success on national TV made his life ‘a bit crazy’ after the show.

He said: ‘I started touring, performing my songs across the country and whenever I travelled through a big city, I was constantly getting recognised.

‘Even at the supermarket, fans would mob me. It was a strange experience. Luckily, life is a lot quieter now.’

Iain now has a career thanks to the talent show boosting his profile, and he now hosts a weekly prime time travel and tourism programme broadcasted nationally across China.

Taylor Hermerding, Editor in Didactics at Babbel, said the trio have managed to carve out careers in ‘difficult’ circumstances as they had to learn a new language.

‘To forge a successful career in the public eye is difficult enough in the safety of your own country, but to do so in an unfamiliar language and culture is a different challenge altogether,’ she said.

‘If you saw these people standing at a bar in London you might not give them a second thought, but in France, Pakistan or China, they’d be swamped by adoring fans.’