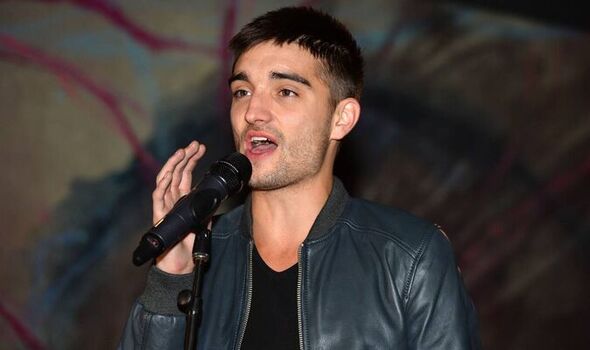 The singer, originally from Bolton, passed away yesterday surrounded by his family and bandmates.

He disclosed in October 2020 that he had been diagnosed with stage four glioblastoma and had begun radiotherapy and chemotherapy.

In recent weeks he bravely performed on stage with the band.

The Wanted said: “Max, Jay, Siva, Nathan and the whole Wanted family are devastated by the tragic and premature loss of our bandmate Tom Parker, who passed away peacefully.

“Tom was an amazing husband to Kelsey, and father to Aurelia and Bodhi. He was our brother, words can’t express the loss and sadness. Always and forever in our hearts.”

His grieving widow Kelsey wrote: “It is with the heaviest of hearts that we confirm Tom passed away peacefully with all of his family by his side.

“Our hearts are broken, Tom was the centre of our world and we can’t imagine life without his infectious smile and energetic presence.

“We are truly thankful for the outpouring of love and support and ask that we all unite to ensure Tom’s light continues to shine for his children.

“Thank you to everyone who has supported him in his care throughout – he fought until the very end. I’m forever proud of you.”

Tom wed actress Kelsey Hardwick in 2018. Their son, Bodhi, was born last October and their daughter, Aurelia Rose, in 2019.

Tom had been sharing details of his battle with fans. Last November he revealed his brain tumour was stable and “under control” after a scan.

He wrote: “We had the results from my latest scan…and I’m delighted to say it is STABLE.

“Such a mix of emotions. We couldn’t ask for any more really at this point; a year or so into this journey.

“Honestly over the moon. We can sleep a little easier tonight.”

In the Channel 4 documentary Inside My Head the singer told of suffering short-term memory loss and spending nearly three months in bed.

Tom said: “It’s so hard to think about the future, I don’t want to know.

“I don’t think you know how you feel about death until you’re faced with it.Am I going to die?

“That’s the most important question… I want to stick around – and be the best version I can!”

The singer also explained in a separate interview that while he was classed as terminal, he was aiming to be cancer-free by this March.

Ed Sheeran wrote on Instagram: “So sad to hear of Tom’s passing. Very sad day, what a lovely guy.”

The Wanted were formed in 2009, with Tom, Max George, Siva Kaneswaran, Nathan Sykes and Jay McGuiness. They are known for songs such as Glad You Came, Chasing The Sun and All Time Low.