The entire Time’s Up board, including Shonda Rhimes and Eva Longoria, are now stepping down — just over a week after the CEO resigned for her role in the Andrew Cuomo sexual harassment scandal.

Time’s Up announced the shakeup in a statement over the weekend, acknowledging the “current crisis” engulfing the sexual harassment victims’ advocacy group.

The nonprofit has been rocked by scandal in recent weeks after it emerged its leaders advised disgraced ex-New York Gov. Cuomo’s administration after he was first accused of sexual misconduct last year. 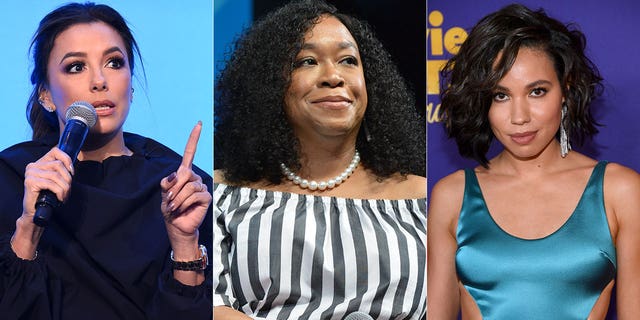 Eva Longoria, left, Shonda Rhimes, Middle, and Jurnee Smollett, right, in addition to the rest of the Time’s Up Board, will be stepping down.
(Getty Images)

CEO Tina Tchen and Time’s Up Legal Defense Fund chairwoman Roberta Kaplan both resigned over their roles in the Cuomo scandal.

“We see the current crisis within Time’s Up as an important opportunity for growth and change,” the group’s statement said.

“Time’s Up is ready for new leadership, and we want to move forcefully toward its new iteration.”

The current board will be replaced entirely by new members over the next 30 days.

Four current board members — Ashley Judd, Colleen DeCourcy, Raffi Freedman-Gurspan and Gabrielle Sulzberger — will remain on briefly to help with a “smooth transition”, the group said.

Longoria and Rhimes, as well as Nina Shaw, Hilary Rosen, Katie McGrath, Christy Haubegger, Ana Navarro and Jurnee Smollett are among those who will step down over the next month.

Time’s Up is currently being led by interim CEO Monifa Bandele.

The revelations of the new board come after Time’s up faced intense scrutiny from supporters regarding the Cuomo ordeal after a New York attorney general investigation found he sexually harassed at least 11 women.

Kaplan resigned after the investigation found she had been involved in efforts to try and discredit Cuomo’s first public accuser, Lindsey Boylan.

Just days after Cuomo resigned, Tchen also stepped down as CEO after text messages revealed she had initially discouraged Time’s Up leaders from making any public comment about Boylan’s allegations.

In a statement announcing her resignation, Tchen acknowledged she had become a “divisive” figure.

This story first appeared in the New York Post

“I am especially aware that my position at the helm of TIME’S up has become a painful and divisive focal point, where those very women and other activists who should be working together to fight for change are instead battling each other in harmful ways,” she said at the time.

This story first appeared in the New York Post.