In the first season of Euphoria, Cassie Howard is 18 years old and a senior in high school, but actress Sydney Sweeney who plays Cassie is 24 years old IRL.

And at age 24, Sydney is living her best life, restoring vintage cars, attending the Met Gala, getting engaged (!) to her fiancé, Jonathan Davino, and of course, strutting the Euphoria High hallways dolled up in gingham sundresses. We’re big fans of her character’s style and it’s safe to say that we all remember the borderline-ridiculous dedication (read: waking up at 4 am) that Cassie puts towards getting ready for school each day. But it turns out that the real teenage Sydney was a little more laidback than her fictional, jade-roller-loving TV counterpart. 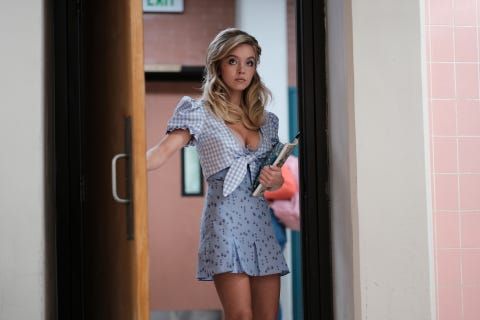 The actress recently appeared on The Tonight Show Starring Jimmy Fallon to talk about all things Euphoria, and Sydney spilled that she created a five-year business plan PowerPoint to present to her parents about why they should let her pursue becoming an actress back when she was around 11 years old. Clearly, she did something right!

Jimmy and Sydney also reacted to some top-notch Euphoria memes including a tweet about Cassie’s iconic hiding-in-the-bathtub scene that read, “me when the doordash person knocks instead of just leaving the food there.”

The pair discussed the over-the-top fashion at Euphoria High (I mean, with those tiny purses, where are they putting their textbooks?!) and the Twitter trend where people compare their realistic high school photos to the dolled-up cast of Euphoria. Jimmy brought out his very own version of the meme featuring a throwback photo of Sydney herself, who reacted by clapping her hands over her mouth in good-natured embarrassment. 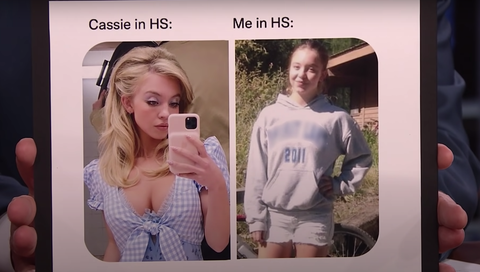 “The best part [is] my shoes…I’m wearing, like, army boots,” explained Sydney, who revealed that the photo was taken during her sophomore year of high school. She’s fresh-faced, wearing an old sweatshirt and denim shorts, and smiles at the camera. Celebs — they’re just like us!

Watch the rest of Sydney’s interview with Jimmy Fallon on YouTube: