Shiloh Jolie-Pitt kept her blonde hair back in a bun as she visited the studio of visual artist Daniel Arsham, staying casual in jeans and Vans sneakers.

Shiloh Jolie-Pitt, 15, is looking more and more grown up! The teenager was spotted out with her mom Angelina Jolie, 46, and older brother Pax, 17, as the trio headed to the studio of visual artist Daniel Arsham in the Queens borough of New York City earlier this week. Shiloh, who is the spitting image of her dad Brad Pitt, 57, kept her blonde hair back in a casual bun for the family stay. She stayed casual in a loose fitting pair of faded and distressed jeans, a cozy black hoodie and a classic pair of black Vans sneakers. 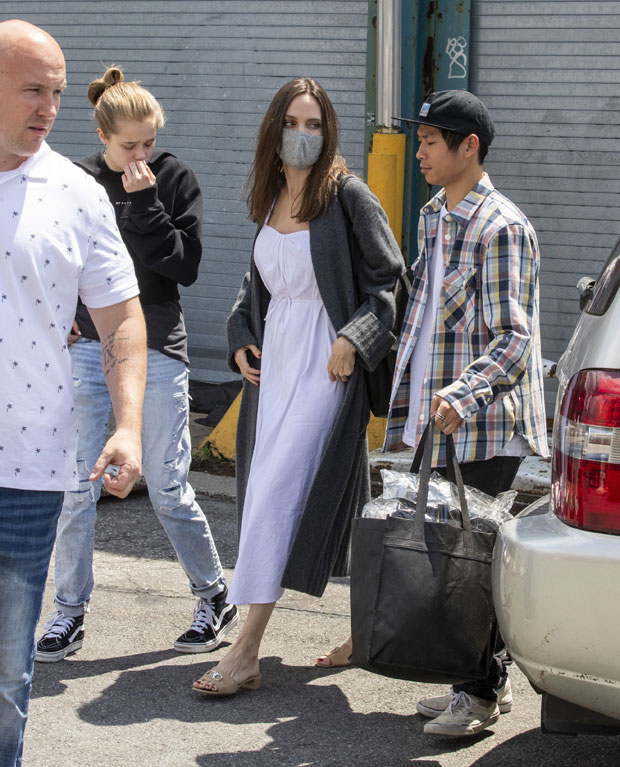 Meanwhile, Angelina opted for her usual neutral palette as she rocked a midi length white, cotton dress that featured a dainty tie at the waist. She added a long, charcoal gray cardigan sweater over top of the summer dress that featured chunky ribbed details around the sleeves and bottom. The Lara Croft: Tomb Raider star finished her ensemble with a nude colored pair of Salvatore Ferragamo slides to show off her cherry red pedicure, as we well as a protective gray face mask. She later removed the mask as she walked through a parking lot area.

Meanwhile, Pax channelled the casual vibe of his younger sister with a pair of black jeans and blue plaid button down shirt. He added a white t-shirt underneath, finishing the laid back ensemble with a black baseball cap and dirty white sneakers. The 17-year-old was holding onto a reusable black bag that appeared filled with unopened merchandise, perhaps from the artists studio. The trio were seen walking around outside of the building and in the parking lot before heading in.

Angelina and her brood have have had a busy trip to NYC, where they headed after her 46th birthday dinner at TAO in Hollywood’s Dream Hotel. Pax and younger brother Knox, 12, were seen hitting up Gray’s Papaya on the Upper West Side to get some hot dogs on June 8, soaking up the sunshine. Angelina also reportedly re-connected with her ex-husband Jonny Lee Miller, 48, on a trip: the actress was seen heading into his Brooklyn pad with a bottle of wine on June 11. Just days later, it was reported that she had introduced Jonny to sons Pax and Knox. Vivienne, 12, Maddox, 19, and Zahara, 16, are also in the Big Apple with their mother.