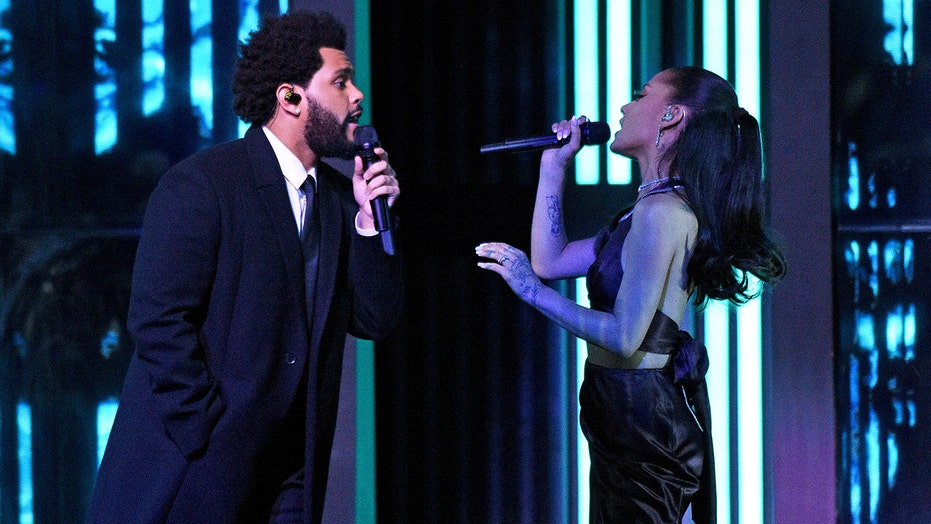 Ariana Grande made her first appearance as a wedded woman Thursday night at the 2021 iHeartRadio Music Awards.

The 27-year-old, who married boyfriend Dalton Gomez in an intimate wedding ceremony at her Montecito, Calif. home mid-May, showcased her new bling — designed by her new husband — during a performance with The Weeknd.

The pair performed the remixed version of “Save Your Tears” — which features Grande’s vocals — off The Weeknd’s 2020 album “After Hours” to open the show. The singer’s sky-high “whistle register” notes during the performance quickly had Twitter buzzing following the song.

Eagle-eyed viewers, however, could catch glimpses of Grande’s wedding band from Gomez, which was making its public debut Thursday as well. 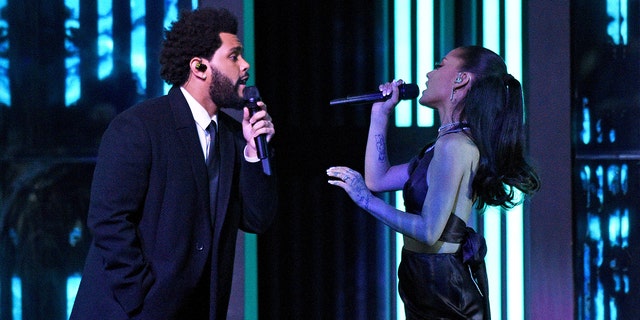 In this image released on May 27, The Weeknd and Ariana Grande perform onstage at the 2021 iHeartRadio Music Awards at The Dolby Theatre in Los Angeles, California, which was broadcast live on FOX on May 27, 2021.
(Kevin Mazur/Getty Images for iHeartMedia)

The pearl, an unusual choice for an engagement ring, is believed to be a sentimental choice for Grande: It’s not only her birthstone, but also may be a gift from her grandmother, who reportedly had it fashioned from a tie pin belonging to her husband.

Grande — along with Billie Eilish, Dua Lipa, Megan Thee Stallion and Taylor Swift — is nominated for Female Artist of the Year at the show.