Meghan McCain won’t be gaslit. The conservative co-host of ‘The View’ spoke out against her fellow Republicans who see nothing wrong with the aftermath of the Capitol Hill insurrection.

The View co-host Meghan McCain is a vocal, ardent Republican. But she’s not standing with the members of her party who think Donald Trump did no wrong after his followers stormed Capitol Hill on January 6. “To all the Republicans who think it’s going well over here in DC — there are more American troops present in this city than Iraq and Afghanistan,” Meghan tweeted on January 13. “What is this, Moscow?! Stop defending this — I’m not going to be gaslit. This is insane.”

Meghan is currently living in DC with her husband, conservative writer Ben Domenech, and their newborn daughter, Liberty, so she is seeing this first hand. Her tweet comes after shocking photos circulated showing hundreds of National Guardsmen napping on the marble floors of the Capitol building, including the iconic Statuary Hall and the visitor center. National Guards troops were sent into DC in the wake of the insurrection to squash further riots.

“One for the history books. We haven’t seen this in over 160 years, since the Civil War,” one soldier resting at the Capitol was overheard saying to his friend by a reporter. Some congressional members brought in pizzas to feed the hungry troops as they went inside to debate potentially impeaching President Trump. They are expected to vote in the House of Representatives on the afternoon of January 13. 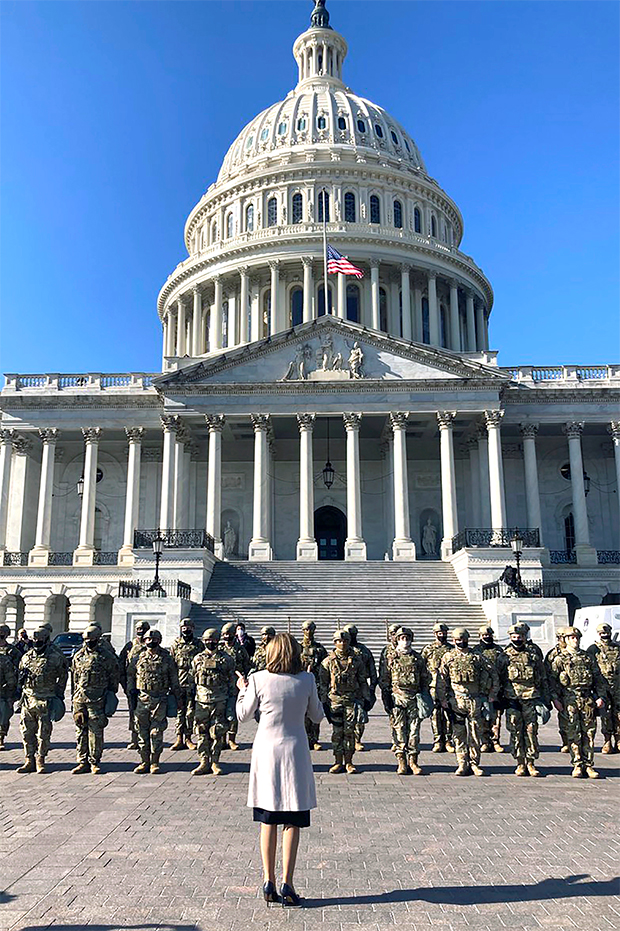 Meghan, the daughter of late GOP Senator John McCain, is passionate about her politics and doesn’t shy away from voicing her opinion — especially on The View, where she’s often the only conservative voice in the room. But she’s no Trump supporter. Meghan vehemently condemned Trump on The View after the riot, saying that she absolutely supported him being removed from office, or impeached. “The bedrock of who we are as a country is the peaceful transition of power, and he is clearly a president who has turned into a mad king,” Meghan said. “And at this point I am calling on all Republicans and Conservatives who still have clout: we have to invoke the 25th Amendment.

“We cannot withstand this. The country cannot go on like this.” She added a scathing message to the rioters: “You are not patriots. You do not represent America. You are scum of the earth who are using and abusing and bastardizing all that I love and have grown up with for your own sick agenda. And that agenda has directly been sent by President Trump.”